Hull Ionians and Chester meet in top of the table clash 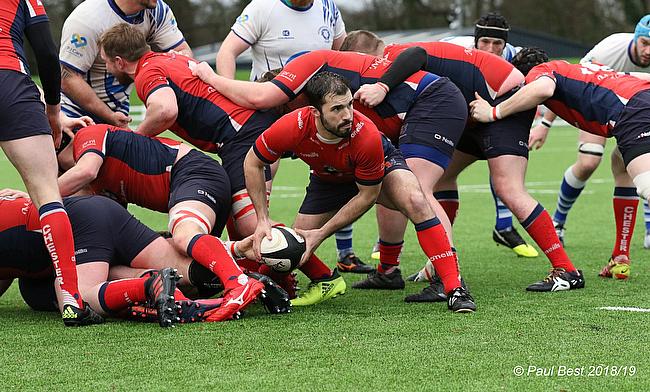 Chester sit third in the league standings, but could go top with a win over Hull Ionians
©Paul Best

Hull Ionians face Chester in National Two North on Saturday and both sides may well be viewing this fixture as a crucial moment in the promotion race.

Chester find themselves just two points behind league leaders Hull, with 10 games in their respective campaigns remaining, and victory for Jan van Deventer’s side at Hare Lane would send them to the summit of the division.

The I’s have seen a comfortable cushion at the top of the table dissolve over the last two months and following four defeats from their last five away games, the Yorkshire side will be hoping for some success on the road in Round 22.

Breathing down Hull Ionians’ necks are second-placed Fylde who are level on points with the table toppers and Warren Spragg’s men host Hinckley on Saturday while fellow title contenders Huddersfield entertain Peterborough Lions.

Meanwhile, high-flying Otley are on the cusp of the promotion picture and they welcome Sheffield Tigers to Cross Green.

Down at the bottom, relegation threatened Macclesfield take on Wharfedale and rivals South Leicester are involved in a Midlands derby against Stourbridge while elsewhere, Sedgley Park face Tynedale and Preston Grasshoppers are at home against Leicester Lions.

Following just two fixtures in National Two North last Saturday, Round 22 will be hoping to deliver a full programme of matches and there is only one place to start this week. League leaders Hull Ionians travel to promotion rivals Chester in arguably the game of the season thus far. The I’s weren’t in action in Round 21 as their clash with South Leicester was cancelled and they saw their lead at the summit disappear as Fylde moved level on points with Hull after their victory against Peterborough Lions.

“Both teams like to play quick, attacking rugby and we know there’s not really too much between the qualities we have and theirs." @RUFCChester coach Jan Van Deventer is relishing the top of the table clash against @Ioniansrufc https://t.co/gO8or6SYaY

The Yorkshire outfit are now sitting in top spot by virtue of ‘Games Won’, but they could be dislodged from the summit by Chester. Fylde’s win last week, coupled together with Chester’s postponed fixture against Hinckley, meant Jan van Deventer’s side dropped down to third place, but they are only two points behind Hull Ionians heading into this encounter at Hare Lane. Chester have also won 10 of their 11 matches on their own patch this weekend and another victory on Saturday would see them move ahead of Hull Ionians in this fascinating promotion race.

Fylde’s Round 21 fixture with Peterborough Lions was one of only two matches which took place last weekend in National Two North, but the outcome certainly had an impact on the division. Warren Spragg’s side produced a solid display to clinch a bonus-point win and the Lancashire outfit are now level on points with league leaders Hull Ionians, having played a game more.

With the I’s and Chester facing one another on Saturday, Fylde know a victory at Woodlands in Round 22 could see them move to the summit, but standing in their way are Hinckley. The Hornets will arrive in the North-West feeling refreshed after their match with Chester was postponed and they will be keen to improve their form on the road. George Chuter’s side are still in the promotion conversation, but their results away from home are threatening to end their top two hopes. Just one win from their last eight matches on their travels is a factor in why Hinckley are 12 points behind the leaders, but a victory at Woodlands on the weekend could reignite their promotion aspirations.

With Hull Ionians taking on Chester in Round 22 and with Fylde now level on points with the table toppers, it might be easy to forget the strong position Huddersfield find themselves in. Last week’s match with Tynedale was disrupted by the weather which means Field do enter this fixture with Peterborough Lions on a five-match winning run, but now, they have two games in hand.

Gareth Lewis’ side are only four points behind league leaders Hull Ionians so the men from Lockwood Park are technically in control of the title race as things stand. However, they will be fully aware that one bad result will change the dynamic of the promotion battle so they will be keen to maintain their momentum when they host Peterborough Lions on Saturday. The Lions were in action last week, but their loss to Fylde only reduced their chances of avoiding relegation. The division’s bottom club are now 22 points from safety with 10 games in their season remaining so a positive outcome in Yorkshire may well be a requirement this weekend.

With a whole host of postponements last week, Otley were able to increase the pressure on the top four following their victory over Leicester Lions. Charlie Maunder and Tom Casson’s side produced a professional display at TMDP Park and they are now only seven points behind Fylde, having played the same number of matches as the Lancashire outfit.

The men from Cross Green return home this week and they entertain a Sheffield Tigers outfit who weren’t in action in Round 21. Their fixture with Sedgley Park was called off so Jamie Broadley’s side will be itching to resume their campaign and more importantly, return to winning ways. The Tigers enter this contest having lost four of their last five games and despite producing some encouraging displays over the course of January, they have found themselves on the wrong side of the result on too many occasions. The Tigers now sit one place and eight points above the drop zone so a first away victory since November would be provide a boost for the men from Dore Moor.

Following their frustrating home defeat against Leicester Lions in Round 20, Sedgley Park may have wanted to right some wrongs last weekend, but their clash with Sheffield Tigers was postponed. Instead, Matt Bebbington’s side have had two weeks to forget about their narrow loss to the Lions and the seventh-placed side have the chance to hit back when they host Tynedale this Saturday.

Tyne, who had their fixture called off against Huddersfield in Round 21, also come into this fixture aiming to bounce back from a defeat they suffered at the end of January. Ben Woods’ side had won their last three matches prior to their fixture against Fylde a couple of weeks ago, but they came off second best against the Lancashire club meaning Tyne remain in eighth place. The North-East outfit now travel to Park Lane aiming to return to winning ways and a victory in Greater Manchester could see Tyne leapfrog their hosts on Saturday afternoon.

Following last week’s postponement against Macclesfield, Preston Grasshoppers entertain Leicester Lions on Saturday as Paul Arnold’s side look to get their campaign back on track. Last time out for the Hoppers, they saw a 14-0 lead evaporated in front of them as Wharfedale came from behind to snatch a victory at Lightfoot Green so the hosts will be keen for a reaction back on their own patch in Round 22.

Preston have won just one of their last four games and the same statistic applies to Leicester Lions. After coming from behind to beat Sedgley Park in Round 20, Andy Key’s side fell to a home defeat against Otley last weekend meaning the Lions remain 10 points clear of the relegation places. The Midlands club still have a nice cushion between themselves and the drop zone and a repeat of their 26-24 victory against Hoppers in October would be a welcome result for the Lions.

Stourbridge weren’t in action last week as their fixture with Wharfedale was called off, but they may enter this clash with South Leicester in an upbeat mood. Neil Mitchell’s side defeated league leaders Hull Ionians in their last outing at the end of January following a superb defensive effort. The result saw the Midlands club secure a third home win on the spin so Stour will now be aiming to improve on their away record if they want to start moving up the division.

Stour have not won on the road since September and this weekend they travel to a South Leicester outfit who may also be in good spirits. Their match with Hull Ionians was postponed in Round 21, but in their last game, South produced an outstanding performance to beat Hinckley at Welford Road. They remain eight points from safety and another home triumph on Saturday would certainly enhance their survival chances.

After not being involved in Round 21 due to the postponement of their fixture with Stourbridge, Wharfedale enter this contest with Macclesfield off the back of successive wins against Hull Ionians and Preston Grasshoppers. Those results would have put the smiles back on the faces of the Dale faithful after a blip in form across the Christmas period and Rob Baldwin and Jon Feeley’s side are now up to 11th place with a couple of games in hand.

Marshall Gadd @gaddaffi84 @MAG_landscapes rings the changes for the visit of @wharfedalerufc on Saturday!! Good to see Dan Matthews, @FrankyBarker and James Hampson back in the squad!!! #maccrugby pic.twitter.com/fvsFKSE0SR

The Greens travel to Macclesfield in Round 22 and the hosts were also not in action last week as their home fixture with Preston Grasshoppers was called off. The situation didn’t change for the Blues as they remain 18 points from safety and now they have a game in hand. Marshall Gadd’s men have lost their last five matches, but all four of Macc’s victories this season have come at Priory Park so another success on their own patch might be a necessity if the Blues are to pull off a remarkable revival.