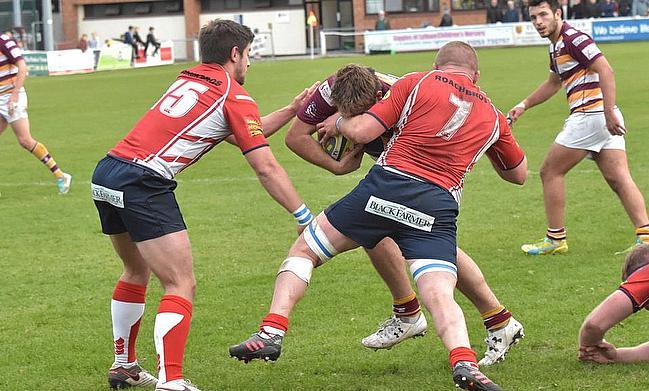 Caldy thrash Loughborough while Cov remain 100 per cent
Coventry aiming to pick up from where they left off
Round 16 Review: Old Albanian fightback, Sale FC crank up the pressure and Chinnor edge thriller
Festivities on hold as local rivalries take centre stage in National One

Defeats for Hull Ionians and Old Albanian to begin the New Year leaves both sides still fighting for survival in National One and this weekend, the teams meet in Hertfordshire in what could prove to be a vital fixture.

The Yorkshire side will arrive at Woollams on Saturday afternoon five points adrift of safety while the hosts are 10 points away from climbing out of the relegation zone so victory for either side is crucial, even with four months of the season still to go.

Fellow strugglers Fylde will have a close eye on proceedings when the division’s bottom club host Plymouth Albion while Loughborough Students will be itching to respond from their mauling against Caldy when they entertain Old Elthamians.

At the top, league leaders Coventry will be aiming for their 17th win on the spin when they travel to Blackheath while Darlington Mowden Park welcome Birmingham Moseley to the northeast,  Ampthill & District go to Esher and Bishop’s Stortford take on Rosslyn Park. Caldy's trip to Cambridge has been postponed.

It is now sixteen wins on the bounce for league leaders Coventry. A comprehensive victory over Old Albanian last weekend coupled together with some postponements means Rowland Winter’s side are 18 points clear at the summit and firmly in control of their own destiny as a place in the Championship draws nearer.

Their next hurdle to overcome is a trip to fifth placed Blackheath. ‘Club’ were alongside Cov at the start of the season, but some inconsistent form has unfortunately seen James Shanahan’s side slip away. Last week, the men from Well Hall lost to Ampthill & District meaning Blackheath have not won for just over a month. Having said this, they do have the quality to string a sequence of positive results together and added to that, six of their 10 victories have come on home soil and they did win this corresponding fixture 42-5 last year. Can Blackheath become the first side to inflict a defeat on Coventry in 11 months?

Darlington Mowden Park’s fixture with Cambridge was postponed last weekend meaning the second placed side now have two games in hand, one of which is against Coventry. Danny Brown will have used the extra week to prepare his team to hit the ground running after the Christmas break and DMP really can’t afford to slip up if they still believe they can catch Cov.

The northeast side have won all eight of their home games this term so the task facing Birmingham Moseley isn’t straightforward this weekend. The Midlands club beat Hull Ionians to kick off 2018 and it was the perfect start after three defeats in December. This is Moseley’s second season in National One after relegation from the Championship and it looks as though Richard Protherough’s side are stabilising themselves this term as they aim to build their way back to the second tier. Moseley have won five of their eight matches on the road this season and they will be keen to end DMP’s exquisite home form on Saturday.

Ampthill secured a solid 21-14 win against Blackheath last weekend in what has been another steady season in National One. This is the A’s third year at this level, but once again, the team at the top seem unstoppable. Paul Turner’s side will now be focused on finishing as high as they can as they head to Molesey Road to take on Esher this Saturday.

Esher suffered their fifth defeat on the spin last week and yet another away loss. They saw a potential victory snatched from their grasp by Rosslyn Park, but it is now no win since the end of November for Esher. At home is where they have had the most joy this term as all five of their victories have come on their own patch and the 11th placed side will hope to gain their first win of the New Year in Round 18.

Plymouth’s game against Bishop’s Stortford was postponed last weekend so Kieran Hallet’s men will be raring to go against Fylde this Saturday. It seems like Plymouth will be battling it out for second spot again this season with Coventry starting to run away with the promotion race, and with Albion just three points off the silver medal position and with two games in hand, the ball is their court.

As for their opponents Fylde, they suffered a heavy defeat to begin 2018 as they were comfortably beaten by Old Elthamians. Warren Spragg’s side are now 14 points adrift of safety after 17 matches played and results need to start going in their favour sooner rather than later.  The Lancashire side have won twice at home this term and they did beat Plymouth 39-37 in this fixture last season so they will be hoping to upset the odds for the second campaign in a row.

As we have just mentioned, Stortford’s opening fixture of 2018 was called off against Plymouth Albion last Saturday so Andy Long’s side have had to wait an extra seven days to continue their fine season. The 2016/17 National Two South winners currently sit sixth in the table after impressing in the first half of the campaign and now they will be focused on delivering the same sort of performances in the final four months of the term.

Rosslyn Park are currently moving in the right direction. After a run of just one win from six matches, Kieran Power’s side have flicked a switch and are now unbeaten in three games which has seen them move out of the relegation zone and up to 12th in the standings. Their fightback against Esher last week underlined their recent determination and they will be aiming to carry that grit into this tough game at Silver Leys this weekend.

Old Elthamians got off to a flyer in 2018 with a convincing win over Fylde last Saturday. It has been quite the journey for Gavin Lach’s side who currently sit seventh in the standings, having secured nine wins from their 17 matches this term. The men from College Meadow continue to aim high and despite sitting in the top half of the table following promotion into this division for the first time in their history, OEs will not settle and a fourth away victory of the campaign will be at the forefront of their minds heading into this weekend.

In contrast to OEs fantastic win last Saturday, Loughborough Students were thrashed 71-14 by Caldy. Director of Rugby Alan Buzza said that his side can progress in the New Year so they will want to put their performance on the Wirral to the back of their minds when they host OEs this Saturday. The Students have won just two of their last five fixtures which leaves them five points clear of the drop zone so a fifth home win of the season would just steady the ship in the Midlands.

Old Albanian and Hull Ionains meet this weekend at Woollams in what can only be described as a crucial relegation battle. The visitors are yet to win away from home this season – losing all eight of their fixtures on the road – but a purple patch of home form between October and November is the reason why they are still only five points adrift of safety at this moment in time.

In terms of Old Albanian, they produced an excellent performance against Ampthill and District before Christmas, but always had an uphill battle against Coventry to begin the New Year. Gavin Hogg’s men suffered their 13th defeat of the campaign last Saturday meaning they are now 10 points from safety heading into this vital fixture. With just one win between OAs and Hull Ionians from their last 10 matches combined, a welcome victory for either side would be massive if they are to beat the drop this season.