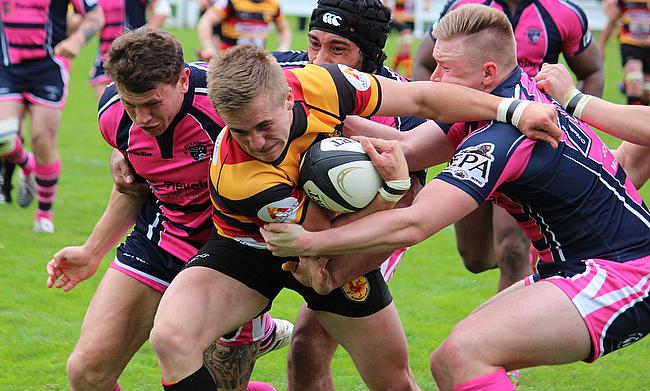 It may be a surprise to see Wharfedale and Harrogate sitting in the bottom two places of National Two North as things stand, but Round 12 proved to everyone the quality both sides possess.

Both clubs entered last weekend with just two wins from their opening 11 games, but both Yorkshire outfits clinched crucial wins as they look to dig themselves out of danger.

Harrogate edged out Chester to pick up their second win in three matches whilst Wharfedale beat Scunthorpe which leaves both sides just two points from safety.

At the top, Caldy remain at the summit after a professional victory over Leicester Lions whilst Sale FC narrowly beat Sedgley Park at Heywood Road to stay second.

Elsewhere, Stourbridge maintained their 100 per cent home record whilst newly-promoted Hinckley made it five wins from their last five matches.

The Lions did sit eight points behind Caldy before the start of play, but back to back defeats for the Midlands side leaves them chasing a top two spot.

The hosts did actually get off to a good start as James Grayson scored a try three minutes into this contest, but that was as good as it got for Leicester.

Winger Nick Royle was yellow-card soon after the interval and Grayson landed two early penalties to hand the Lions a lifeline, but the visitors put the game beyond the home side as Tom Concu sealed Caldy’s bonus-point late on to move them three clear of Sale FC.

The hosts led 19-10 at half-time after tries from James Bache, Chris Townsend and Gareth Rawlings wiped out a Penalty Try and three points from the boot of Steve Collins.

Sedge’s Harri Greville and Jonny Matthews both crossed in quick succession after the break to put the visitors 24-19 ahead.

Liam McGovern brought Sale back to within two points with his first penalty of the afternoon before the fly-half bisected the posts from the tee to clinch the victory for the hosts.

Ciaran Moore scored twice for Stourbridge as they survived a spirited Preston Grasshoppers fightback to move up to fourth in the National Two North table.

Moore, who is the skipper at Stourbridge, led by example in this victory as Stour are now firmly back in the promotion hunt following a seventh consecutive home win.

His brace of tries helped Stour into a 19-0 lead at half-time, after Chris Easton’s try had opened the scoring for the afternoon.

The second-half was less comfortable for the hosts. Cam Robinson touched down soon after the restart for the Hoppers and that was swiftly followed by an Ally Murray try.

Garth Dew’s men battered away at the Stourbridge defence to try and find a third score, but it wasn’t to be as the home side held on for victory.

Harrogate secured their second home victory in a row to move to within two points of safety following victory over Chester.

Two David Doherty penalties gave the hosts a 6-0 lead at the interval in a first-half which Harrogate ended the stronger.

The home side then spurned a penalty soon after the restart before Chester got their first points on the board as Callum Bennett knocked one over from the tee.

Chester then started to turn the screw as their backs looked dangerous with the ball in hand, but they failed to fashion any clear cut chances. A late penalty was narrowly missed by the visitors before Harrogate were able to retain possession for the remainder of the match and hold out for a crucial win.

Tynedale secured their second away win on the bounce as a late penalty saw them edge out South Leicester at Welford Road.

Both sides crossed for two tries apiece in the first period, but it was Tyne that held the slender 13-12 advantage at the break.

The teams exchanged tries in the third quarter of this encounter before South’s Rickie Alley landed a penalty 10 minutes from time to reduce Tynedale’s lead to just two points.

Tyne responded with a penalty of their own, but on 76 minutes it looked as though the hosts were going to extend their four game unbeaten run at home as they crossed for their bonus-point try.

However, Tyne kept their cool and slotted over a late penalty to seal back to back wins.

A late James Wood try saw Otley come from behind to beat Sheffield Tigers to clinch their first away victory of the season.

Tom Hodson and Jack Mackie’s tries put the visitors ahead at the interval after Jamie Broadley’s score had given Sheffield the lead.

The home side rallied in the second-half in a tight and tentative affair as the composure of Tom Outram allowed him to slott over two penalties and put the Tigers in front with 10 minutes to go.

With the game now slipping away from Otley, they sparked into life and applied pressure on the Sheffield defence.

And they were rewarded for their endeavour as Wood was driven over from close range to ultimately seal the win for Otley which is now their third in their last four matches.

Hinckley made it five straight wins in National Two North as they beat the Luctonians at Mortimer Park.

Conor Buillvant ran in from half-way to give his side a 5-0 interval lead in a first 40 minutes where Hinckley may have felt they could’ve had more than just the one score.

Any regret they may have had was forgotten about four minutes into the second period as Builllvant dotted down once again for the away side.

Just before the hour, Hinckley extended their lead with a Penalty Try as the Luctonians were unable to repeal some intense pressure from the visitors.

The home side then started to click into gear and were rewarded for their best passage of play in the game when Will Hodnett dived over next to the posts on 66 minutes.

However, a serious injury to Piers Morell halted the game before the Lucts got the next try of the match through Rhyan Scott-Young to make the score 17-14 with just over five minutes of this contest remaining.

However, Hinckley had the final say as a well organised maul led to the bonus-point try which was scored by Ben Avent to seal another victory for the Leicestershire side.

Wharfedale secured a vital victory to move them to within two points of safety thanks to this win over Scunthorpe at The Avenue.

Dan Stockdale scored the only try of the first-half as the home side opened up a 13-9 lead at half-time, with Tom Barrett landing two drop goals and a conversion for Dale while Steve Johnson kicked three penalties for Scunthorpe.

Barrett and Johnson exchanged penalties after the break and despite Dale playing with 14 men for large periods of the second-half, they were able to dominate the game.

Their control on this contest was rewarded as a free-flowing move ended with Barrett pinging over another drop-goal which sealed Wharfedale’s third win of the season.