Close local derby goes the way of the home team 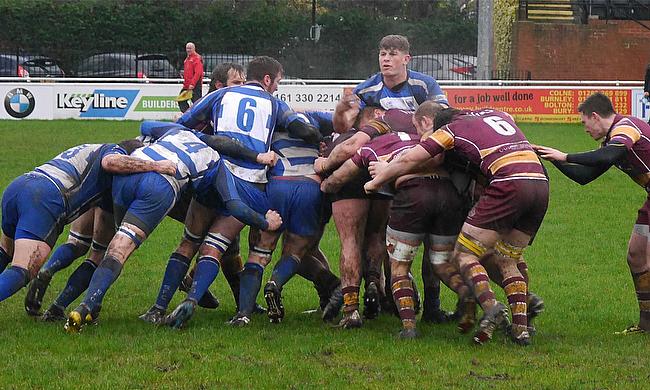 A close, committed and hard fought local rugby Derby played out between 2nd and 3rd in National 2 N.

Both teams had chances to win it but the home team clinched with a penalty from McGovern. Sale have benefited from their close relationship with Sale Sharks but the team looked vastly experienced as they ran out. The crowd including Mark Cueto, Peter Anglesea and club legend Steve Smith; local rugby doesn't get better than this.

Sometimes games entertain and sometimes they enthral. This game saw Sale race in to a lead within 5 minutes as Sedgley Park missed timed their own defensive line out and the Sale forwards collected the ball, found the space and were over for the try, ably converted by McGovern.

Sedgley responded positively through their forwards and secured a lineout 8 metres from the line. A clean take and driving maul with Matthews, Ashcroft and Crous directing the traffic. As the maul marched forward, it crumbled and the referee called a penalty try. This was the first offence and no yellow shown. In the space of 10 minutes the referee had pinged the Sedge scrum and the Sale defensive maul - it seemed a message was being sent.

Sedgley Park charged forward once more and a penalty went their way which Collins converted for a score of 7-10 at the 15 minute mark.

Both teams had vastly experienced 10, 12 & 13 combinations; however the heavyweight collisions in the centre nullified each other. Sale were competitive at every breakdown with second row Rhys Davies leading the home team's forward efforts superbly. This authoritative leadership in the tight differentiated the two teams.

Sale were awarded a penalty that they kicked to the corner and used the position to set and drive for a classic forwards play, that was to be repeated against for Rawlings to score with McGovern converting to take the home team in at half time 19-10

One trait of the first half that frustrated players, coaches and fans alike were the number of high tackles being missed by the officials; the fans frustrations turned to the coffee machine during the half time break!!

The away team lost their experienced 10 late in the first half and it was his replacement, Holloway who added some pace and footwork to the game at the start of the second half.

That improvement in pace saw a ruck on the Sale 22m that Sedgley's Greville to escape through the middle of the ruck and race in under the posts. The away fans seemingly coming to life. It was now a 2 point game.

Again it was Holloway's vision that opened the game, this time it was Sedgley's Matthews that broke through to score, with Riley securing the conversion; 19 - 24

Sale responded with an excellent re-start and pushed for territory. The away team defending strongly. As for most of the match there were plenty of knock ons so possession was a valuable commodity. A kick ahead was well collected by Andy Riley in his 22 but  his return kick went to the arms of Rhys Davies who accelerated forward and gained valuable yards. A penalty resulted and it was McGovern who took control and kicked the points; 22-24

The game slowed down again as both teams attempted to assert their physicality in a tight last 20 minutes. Only when Sales introduced winger Tom Leader did they attempt to inject any speed. Leader did just that and caused the away team's defence to lose shape and give away a penalty that McGovern converted to give a one point game to the  home team. An enthralling game not necessarily entertaining. A close hard fought encounter that warmed the hearts of the home fans.