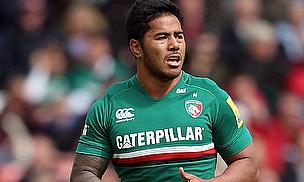 Leicester centre Manu Tuilagi may miss England's November internationals after pulling up with a recurrence of his groin injury during his side's 25-18 European Champions Cup win over Ulster.

He managed just 15 minutes at Welford Road before limping off.

He missed three Aviva Premiership matches earlier this year due to a groin injury and Tigers rugby director Richard Cockerill confirmed he is now set for more time on the sidelines.

"It is a recurrence of his groin (injury)," Cockerill said. " How bad that is I've no idea, but clearly it is not great news is it? It is a bit of a concern for everyone.

"I can't really comment, but you would imagine it is not going to be a one-week (injury)."

Tries from Owen Williams, Graham Kitchener and Freddie Burns helped Leicester beat Ulster, but they had to fight off a comeback late on.

" First-half, we were pretty sharp, and second-half we probably kicked the ball too much. I thought we could have scored another try in the first-half, but we will take the win," Cockerill said.

"We had to get off to a good start. I thought it was a cracking game, a good physical contest. It's one game, and it is good to win it. There is a long way to go, so we won't get too excited.

"I thought we controlled field position in the first-half, we carried the ball well, we looked good physically and we dominated the lineout.

"What is most frustrating was that we had opportunities to kill the game off in the first-half, but I have nothing but praise for the players.

"We have a bucket-load of guys missing, and to beat a good Ulster side is pleasing. We have struggled to get past them in the last couple of years.

"I am happy that we've got a good start. Had we lost tonight, it makes it very hard to get out of the pool.

"We need to make sure we win next week (against Scarlets), and we need to beat Toulon here in December, then go to Toulon and give it our best shot."