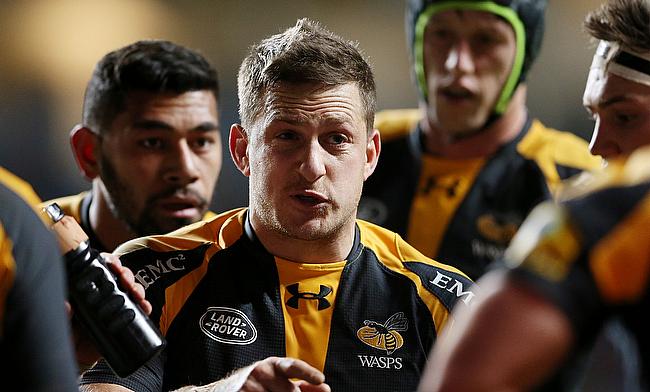 Fly-half Jimmy Gopperth scored 23 points as Wasps recorded their second away win of their European Champions Cup campaign to remain firmly on course for the knockout phase.

After suffering a dramatic late defeat against Pool Five rivals Bath in Coventry last Sunday, Wasps proved in no mood to let history repeat itself, winning 36-10 at the Recreation Ground in dominating fashion.

Gopperth claimed a try, whilst kicking an additional four penalties and three conversions (he added the extras to centre Elliot Daly's first-half touchdown and a late Alapati Leuia try) with Daly slotting a drop-goal to leave a brittle Bath side sunk without trace.

With England's new head coach Eddie Jones looking on, the early promise of Bath’s play which saw Semesa Rokoduguni touch down after only 10 minutes quickly evaporated.

Wasps had opened brightly, but they struggled to cope with a sustained spell of Bath pressure that saw their forwards patiently go through the phases before centre Kyle Eastmond delivered a scoring pass to Rokoduguni.

George Ford added the touchline conversion, yet it proved to be a solitary highlight of a fast and furious opening quarter as Wasps quickly took charge through a fierce scoring blitz that produced 13 points in only five minutes.

Daly broke away to touch down after Bath had spilled possession in midfield, with Gopperth converting and subsequently punishing the West Country side’s ill-discipline with a further two penalties.

And it did not get any better for the home side as their skipper Francois Louw limped off, with Gopperth then slotting his third penalty of the afternoon to open up a 16-7 lead.

Bath were at sixes and sevens, with their forwards enduring a torrid time, and it came as no surprise when Wasps moved further ahead before half-time.

Number eight Nathan Hughes proved their attacking catalyst, capitalising on shoddy scrum work by Bath, before possession was quickly moved wide and Gopperth touched down for a try that he also converted.

Bath still had to absorb a degree of Wasps pressure, but their set-piece woes of the opening 40 minutes had eased, and a George Ford penalty made it 23-10 midway through the second period.

A further Gopperh penalty, though, restored a 16-point gap, and despite the impressive Rokoduguni's best efforts, they could find no further way through an impressive Wasps defence as the visitors finished strongly with 10 further points.