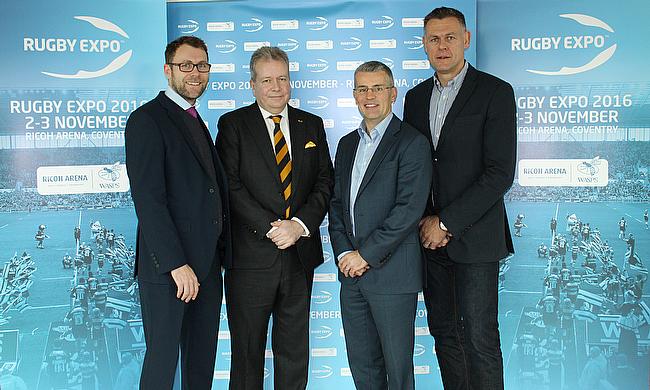 Rugby Expo, the largest B2B conference and exhibition focused on club rugby, will move to the Ricoh Arena in 2016 after agreeing a new long-term partnership with Wasps Rugby Club.

The new long term agreement is designed to support and facilitate the growth plans of the event, which starts this year on Thursday 26th November in its final berth at Twickenham Stadium.

Rugby Expo, which is now well established in the rugby calendar and has continued to be well supported by the home unions, leagues and wider associations including the RPA and ARA, has been at Twickenham since 2011 but from 2016 onwards will move to the well-appointed Ricoh Arena, which since 2014 has been the new home of Wasps.

The venue is fast becoming the second home for the sport and moving the event to the Midlands will widen the reach of Rugby Expo, with 75% of the country within a two hour drive of the stadium. The club already has excellent relationships with its local community clubs and Rugby Expo hopes to build on this to grow the second day of the event when community clubs from across the country will continue to attend Rugby Expo free of charge.

Commenting on the new agreement, Jonathan Wilson, Event Director for Rugby Expo said, "We are really excited by the opportunity presented to us by Wasps when we first initiated conversations to move the event to the Ricoh Arena.

"We want to create a truly national event and welcome more clubs from both the professional game and community game, grow the number of exhibitors and partners and moving to the Ricoh Arena helps facilitates this growth.

"We have always had a good working relationship with Twickenham Experience but in order to achieve our ambitions we had to move the event as we have simply reached capacity after five years of selling out all the available exhibition stands while at Twickenham.

"Having met with David Armstrong, Andy Gibb and their team, we are very confident the club will get right behind the event and work with us and our existing partners to build on the platform we have created, as we look to maximise the potential of Rugby Expo over the next three years."

Wasps Group CEO, David Armstrong, said: "We are delighted that the Ricoh Arena has been chosen to host Rugby Expo for the foreseeable future.

"The Ricoh Arena is the perfect environment in which to bring together sport and business and we look forward to welcoming a range of rugby businesses and supporters, from both the elite and community based game.

"We are fortunate that the Ricoh Arena has a large-scale capacity and are excited about working with Rugby Expo to help grow an event which has already expanded significantly over the past few years."

Rugby Expo 2016 will take place at the Ricoh Arena on November 2/3.