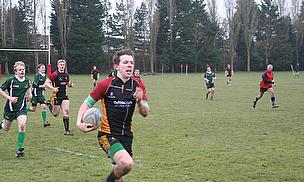 Talking Rugby Union caught up with Wales winger George North, a very helpful guy and a credit to his team.

1. How do you think the scarlets are doing this year?

The Scarlets had a good opening start of the season with us being for most of it in the top four.  I think then we hit a low patch where we had players away for international duties and injuries.  But the boys stepped up and played well to keep us in contention to compete for the play offs.  Although we've had an up and down end to the season, we've got a good run of games now.  If we play well we can make it to the play offs and finish the season in the top four where we aimed to be at the start of the season following last year's low.

2. How influential are the fans at Parc y Scarlets?

For me the crowd have been amazing.  The atmosphere they produce not only at Parc Y Scarlets but on away games as well is phenomenal.  As a new guy of the team the crowd really top the experience.  When they get behind you singing "sosban fach  and chanting "SCARLETS!!!  you feel an extra boost of energy and excitement that spurs you on.

3. What was it like getting your first cap for Wales on the wing?

What more can I say but it was awesome!  The whole experience of the build up during the week to the day of the game to eventually playing was everything I expected and more.  To top it off with a decent performance just sealed the deal on a perfect day.

4. Where do you see yourself in 5 years time?

Hopefully still playing rugby and having a few more caps!

5. What has been your career highlight so far and why?

My season so far has been one massive highlight but for obvious reason it has to be Wales V South Africa.  Hopefully I can produce some more highlights in the up and coming years!

6. Who is your rugby hero and why?

I have few heroes in the game, some that I am lucky enough to play with now and some that are retired.  Jonah Lomu is one of them.  He broke the mould for the modern winger, he was big, powerful and really fast which is what I am trying to achieve.  The benefit of playing with current rugby heroes is learning from them and learning the best of their trade.

7. What career would you be in if you weren't playing rugby?

Either personal training or mountain biking.

8. Do you have a mentor at the scarlets who helps you out?

Mark Jones has helped me a lot.  It's great as he's just finished playing, he's full of knowledge and experience and has a lot to teach.  Also, Stephen Jones and Sean Lamount have helped loads.

I imagine skiing but I haven't been yet!  Plan B is going back to Angelsey. I do want to go to America though.

So many! I enjoyed the Bourne trilogy. Mainly comedy/action films but I don't like horrors!

Depends what mood I'm in! It can vary from Kings of Leon to Adele.

Lance Armstrong from what he's achieve “ fighting cancer and going on to win Tour Du France a number of times.  What a hero!

I enjoy playing Golf as it's totally the opposite to playing rugby.

What films, chill with friends, some golf, and Call of Duty with my feet up.

Finally “ if you had a message to say to your fans who have been supporting the scarlets week in week out, what would you say to all of them?

I just want to say a huge thanks to everyone who has supported me and the club.  The support has been invaluable and I can't do enough to show how grateful I am.