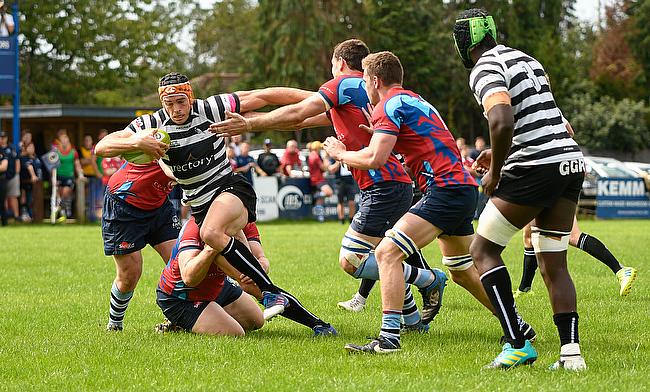 Swat away those January blues and settle in for one of the most exciting weekends of National League rugby so far this season.

As you may or may not have seen, Twitter has been awash with National One title race chatter this week and the intriguing battle for promotion resumes on Friday night when Rams RFC (2nd) take on Chinnor at Kingsey Road.

The second instalment in the fight for top spot takes place in the capital on Saturday when Blackheath host league leaders Rosslyn Park so the picture at the summit of National One will certainly be something to observe when Round 18 concludes.

In National Two North, the focus is on the bottom once again as Huddersfield look to dig themselves out of trouble when they face promotion-chasing Fylde whilst Wharfedale could move away from danger with a victory over Scunthorpe.

Like in National One, the title race takes centre stage in National Two South as Henley Hawks and Taunton Titans collide in order to keep their top two ambitions burning bright.

A more in-depth preview of the action in Round 18 is below:

Usually we start with the league leaders in National One, but this week, the latest round of action in the third tier kicks off on Friday night and quite frankly, it is hard to bypass Rams RFC’s trip to Chinnor. Come Saturday morning, Rams could be on top of the pile if they are able to continue their impressive season in Oxfordshire and the Old Bath Road faithful would be pinching themselves for the umpteenth time this term if they can achieve their desired result.

Second-placed Rams are currently level on points with league leaders Rosslyn Park following a superb run of six straight wins, but Chinnor will pose a serious threat to any title ambitions the club may be harbouring. The hosts on Friday night clicked back into gear with a rampant 54-7 win over Hull Ionians last week and Matt Williams’ men are now nine points off the leaders. A victory in Round 18 could catapult Chinnor back into this gripping title race so they will be hoping to repeat their 36-14 win over the Rams, which they achieved the last time the two sides met at Kingsey Road back in September 2017.

How tough is National League One this season, it’s looking very tight at the top. Big games all over, especially this Friday’s clash between @ChinnorRugby and Rams. That looks like it will be a cracker

Blackheath v Rosslyn Park. These are two sides which have challenged towards the top of National One over the last 17 months and it is the latter who are currently sitting at the summit with their destiny in their own hands. It is easy to get ahead of ourselves when ‘bigging’ up the title race, but every game does seem to matter in this intense fight for promotion.

Park make the trip to Blackheath on Saturday knowing they may well be in second spot by the time they get underway at Well Hall, but Kieran Power’s men will lock horns with ‘Club’ following four straight wins. For the home side, they began the New Year with a defeat against old foes Richmond which massively dented their chances of battling for pole position. Blackheath are now 13 points off the top, but they are only one of three sides to beat the league leaders this season so could ‘Club’ do the double to derail Park’s title aspirations?

Keeping tabs on all of the above will be third-placed Richmond who host relegation-threatened Hull Ionians this weekend. It is hard to see Steve Hill’s side dropping any points at the Athletic Ground in Round 18 and considering the magnitude of the fixtures which involve title rivals Rosslyn Park and Rams, Richmond could well be sat at the summit of the division on Saturday night if results work in their favour.

The promotion candidates edged their way past Blackheath last time out, but did drop to third because they failed to pick up a bonus-point. However, securing any kind of victory is the priority in this relentless pursuit of top spot and the same mentality also applies to Hull Ionians despite their league position. The Yorkshire club are 20 points from safety as things stand, but rugby did pale into insignificance last weekend when the I’s hosted Chinnor as the club remembered 1st XV player Billy Hardy, who tragically passed away over the Christmas period. Mike Umaga’s side now make the trip to Richmond and a positive result in the capital would certainly lift spirits amongst the I’s contingent.

Caldy just need to keep doing what they are doing. That sounds simple because Gareth Davies’ side are making it look simple. The Wirral outfit continue to march on and their title challenge is going from strength to strength as each week passes by. Last time out, the National Two North league leaders secured their 16th win in a row with minimal fuss against Sheffield Tigers and they will be hoping for more of the same when they host Loughborough Students on Saturday.

The table toppers will be aware that next month could define their season with two fixtures against rivals Sedgley Park either side of a trip to Woodlands to face fellow promotion candidates Fylde. For now, all focus will be on Loughborough and Caldy will need to be switched on after the Students ran in 10 tries to beat Chester last weekend. Rhys Edwards’ side have won five of their last seven games, but just one victory on the road since October has been their downfall this term. Win at Paton Field though, and it could arguably be their best result of the campaign.

Two teams with contrasting ambitions meet at Lockwood Park this weekend as second-placed Fylde make the trip to Huddersfield. As recently as last season, both of these sides were challenging for a top two spot but it is the visitors who are once again battling for promotion. Warren Spragg’s side had to dig deep to shrug off the challenge of Wharfedale last time out and Fylde remain eight points off the top and four clear of rivals Sedgley Park.

#Fylde make two changes in their starting line-up for trip to @Huddersfield_RU, with @botha_lex and @halchap in the 1st XV. @MatthewGarrod5 joins the replacements after being out through injury since October. Full squad at https://t.co/IegzVFQykr pic.twitter.com/QMYBMbR8Nq

Similarly to Caldy, the Lancashire club will know their hopes for this campaign could hinge on what happens in February but in order to head into next month still in control of their own fate, they mustn’t look past Huddersfield. Gareth Davies’ side - who currently sit in the bottom three - were on course to upset Sedgley Park in Round 17, but victory was snatched away from them late on meaning the Yorkshire club had to settle for two bonus-points. Field are now four points from safety so a positive result on Saturday would do wonders for their survival bid.

Wharfedale will be hoping that isn’t the case as the Greens are also embroiled in a relegation battle as we approach the final third of the campaign. As things stand, Rob Baldwin and Jon Feeley’s side are four points clear of the drop and one win from their last seven games has left them towards the wrong end of the table.

However, despite Dale’s difficult run of recent form, they have managed to secure nine points, including three bonus points from their last two games against Sedgley Park and Fylde. The Yorkshire outfit will now be keen to turn those positives into a victory and they could achieve that when they host bottom of the table Scunthorpe on Saturday. Tim Robinson’s men are 28 points from safety with a game in hand and the Lincolnshire club have lost all 16 of their matches this term, including last week’s 30-7 defeat to Preston Grasshoppers. Can they stop the rot this weekend?

The dynamic of the National Two South title race will change in Round 18 no matter what happens as second-placed Henley Hawks host Taunton Titans in the first crucial promotion fixture of 2020. Yes, there is still an awfully long way to go, but if the Hawks were able to clinch a victory at Dry Leas, it would seriously strengthen their top two aspirations and put a severe dent in Taunton’s hopes.

Henley come into this fixture having won their last seven games, but they were made to work extremely hard for their latest triumph over Bournemouth. It was also a slog for Taunton last Saturday as they eventually defeated Worthing Raiders in a cracker on their return to the Towergate Stadium. It means Tony Yapp’s side are still in the hunt and if they were to come away from Henley with a result, then their own promotion aims would still be alive heading into next weekend’s clash with table toppers Tonbridge Juddians. However, first things first for Taunton…

How many Tonbridge Juddians supporters will be scanning social media on Saturday afternoon to discover the outcome of Henley Hawks’ clash with Taunton Titans? I expect quite a few, but the TJs staff and players will be purely focused on their task in hand when they welcome Bournemouth to the Slade. Peter Dankert’s side could find themselves as many as six points clear at the summit if results go their way in Round 18 and on paper, they should collect a bonus-point win against the club currently propping up the division.

Here's how the table looks in National 2 South as we approach Round 18 ????#Nat2S pic.twitter.com/J3zkdPLYln

But on last week’s evidence, and given the nature of National Two South, only a fool would write off the capabilities of the sides scrapping for survival. Old Redcliffians gave TJs a run for their money last time out and Bournemouth followed suit against promotion-chasing Henley Hawks before falling narrowly short of causing an upset. The Lions have secured eight points from their last five matches and they are only six points off safety as things stand. The odds are firmly stacked against them to clinch a victory against TJs, but a positive result is certainly not beyond the realms of possibility.

With all the drama that could potentially unfold at the top of the league, there could also be serious developments at the wrong end of the table when Westcliff take on Sutton & Epsom. The hosts on Saturday are entering a crucial period in their season with fixtures against rivals Old Redcliffians and Bournemouth to come before the conclusion of January so Peter Mahony and Jacob Ford will be hoping to see a reaction from their side following their humbling loss to Leicester Lions in Round 17.

For Sutton & Epsom, they were on the wrong end of a 55-22 scoreline against Old Albanian, but Jeff Parsons’ men did, once again, secured some points. They may have not won any of their last five matches, but they have collected five points during that time and it means they are only three adrift of Westcliff, who currently occupy the final place above the relegation zone. When the two clubs met back in September, it yielded S&E’s first win of the campaign so can they repeat that feat to lift themselves out of the bottom three?