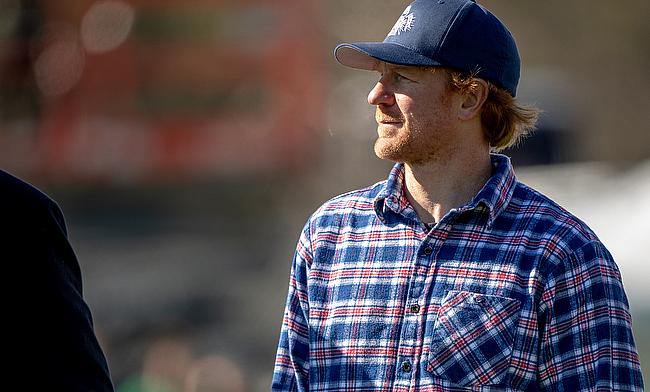 “There’s always been a really robust amateur club game in the US,” CEO of the New England Free Jacks,” Alex Magleby started.

“There are more clubs in New England per capita than anywhere else in the US and there are some strong traditions, as well as some good rivalries. But always amateur.”

Raised in Utah, Magleby has lived on the east coast of America since going to attend one of the country’s leading rugby universities, Dartmouth. Having gone on to represent the USA in both the 15-a-side game, as well as captaining the sevens side, Magleby is now embarking on a new journey as the Chief Operating Officer of one of Major League Rugby’s newest teams, the New England Free Jacks.

Having worked for USA Rugby prior to joining the Free Jacks on a full-time basis, Magleby got to see the benefits of players playing professional rugby first-hand when working with the men’s senior side and how Major League was structured for long-term growth.

“Having been on the other side of the equation with the national teams, having player pools of hundreds of guys competing as professionals for six or seven months of the year was a massive change from what we had to deal with previously,” Magleby said.

“We had our European pros, as well as the guys in the southern hemisphere, which made up a quarter of the team and they’d all come in for Test matches and then the rest of the team was made up by amateurs.

“They would be training two or three times a week (with their clubs), working really hard, but not having the opportunity to get the quality of repetitions under pressure we needed to be competitive on the world stage. Since MLR, there have been some changes in our ranking, our first tier one victory against Scotland and then some really consistent performances in the ARC (Americas Rugby Championship) over those couple of years.

“I wanted to have more of an impact locally and it was a case of how do we maximise that in a professional way? Having the aspirational needs for athletes and fans to engage with the sport at a local level was a really important piece of that. So, I was looking at various options to make that happen.

“Of course, Major League Rugby had started and it had a really good inaugural year. Having worked with the national teams, I had been intimate, but external to what was happening and it was a good structure. The way that they structured it overall was for long-term growth, not trying to be too big too fast.

“There was a prudent roll-out and that remains the case. Everybody is committed long-term to this, but not trying to be the Premiership or Super Rugby today, but certainly compete and be a global competition over time.”

Announced as joining Major League Rugby last September, the Free Jacks jumped straight into action. Signing San Diego flyhalf Tadhg Leader as well as several other regular MLR players, the side played the Toronto Arrows in an exhibition game, losing heavily, but took positives after having put together their team quickly.

Having announced their squad last week, there is a wide array of talent in the squad. Former New Zealand 7s man Beaudein Waaka and former Fiji international Naulia Dawai will be with the team, as well as former Leinster hooker Sean McNulty meaning the Free Jacks look set to be an exciting prospect in their first season in MLR.

Much of the squad is made from New England locals, many of whom have been sourced by Head Coach, Josh Smith, who has been heavily involved with Mystic River Rugby Clubs, a large club side based in Massachusetts.

“For us, it was about finding guys that fit into this team and this community,” Magleby said. “That was a really important piece, not chasing necessarily big stars or anything else like that. It was finding guys that were going to be the right fit and help us move forward.

“Some of the guys we are bringing in are younger, but really talented footballers who have proven that they have gone through a bit of adversity, know how to work and certainly have shown that they have can learn and they will put the team first.

Always nice to cross the whitewash! Pity my shorts slipped off diving in ?? https://t.co/ROGGPDw3bc

“There are some older guys we are bringing in that have some really high quality professional rugby experience in various environments, who can help the younger guys, but are also quality rugby players to this day and want to commit to improving the situation for future rugby players, and fans alike in the New England and Boston area.”

Earlier in 2019, the club announced a one-of-a-kind competition, The Cara Cup, which is a transatlantic competition between the Free Jacks and ‘A’ sides from the four Irish provinces. Magleby says that the competition was just as much about the rugby as it was challenging the team’s staff to get used to putting on a matchday experience.

“At the end of the day, we’re an entertainment company,” Magleby said. “That’s what professional sports are. We were trying to figure out ways to put ourselves in situations that are going to provide some adversity.

“We didn’t have a front office at the time, or an events crew, or anything like that. So, we had to learn pretty quickly. It was a case of ‘what can we do that is going to challenge us on and off the field?’

“We looked at various options and the Cara Cup seemed to be the one where we would get high quality rugby and we could create some events around them, that we thought would bring in fans and their friends.

“There is a large population of Irish and Irish Americans in New England, and it would be a great opportunity for them to now become fans of the Free Jacks. We got a lot of success with that, but we learnt so much. That was the whole reason we did it.”

With the new league season starting next year, Magleby admitted that he is extremely excited for his side to make their Major League Rugby debut, not only to see his team in action, but for announcements in the weeks to come.

“We absolutely cannot wait. I just wish it was here. There is a bunch of announcements that we are excited to make in the coming weeks. The venue, the schedule, some of our partners that are coming on board and I just wish we were into that.

“Then we’re into the grind and that’s where I really find the most peace. When you’re actually in the grind of things, the day to day season. We’re really looking forward to that.”