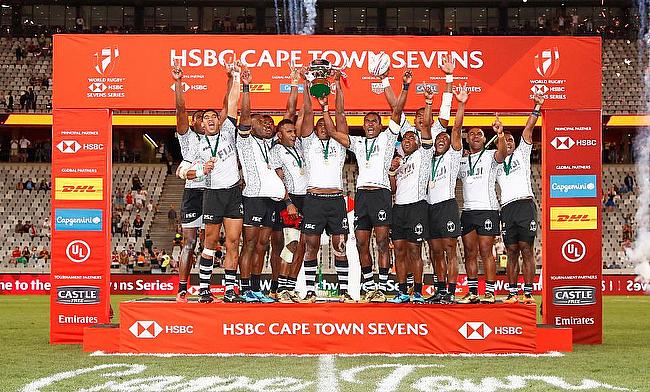 Fiji have moved to third position in the overall standings
©PA

Fiji came up with a scintillating performance in the final to defeat their USA counterparts 29-15 as they went on to clinch the Cape Town leg of the HSBC World Rugby Sevens Series for the first time in South Africa since 2005.

Kalione Nasoko kick-started the proceedings for Fiji with the opening try in the 3rd minute while further touchdowns from Vilimoni Botitu and Sevuloni Mocenacagi in the 6th and 8th minutes respectively meant the Pacific side had a 17-0 lead heading into the break.

Botitu and Nasoko scored their second after the break as Fiji stretched their tally to 29 points before Ben Pinkelman with a double in the 11th and 14th minutes and replacement Carlin Isles provided some respectability to USA's tally with 15 points.

Fiji head coach Gareth Baber: “It’s been a long time coming, for the Fijians to win in Cape Town. We were disappointed last week that we didn’t manage to perform to the level that we’ve done this week.

"It makes me most proud that these players have done everything for their families back home and the country of Fiji. It’s great. Fijian fans are everywhere in the world, wherever we travel, and we say a big thank you to all those who make a big effort to come and support us.”

Vilimoni Botitu was also named the Player of the Final for setting up the win with a couple of tries.

Earlier, Fiji defeated Spain 46-7 before defeating hosts South Africa 12-17 in the knock-out stages to reach the final while USA defeated England and winner of Dubai 7s New Zealand in the quarter-final and semi-final respectively.

Following the conclusion of the Cape Town 7s, USA who finished runners-up in both the legs have claimed the top place with 38 points while New Zealand, Fiji, England and South Africa take the next three positions with 37, 35, 30 and 29 points respectively.

The teams will converge next in Hamilton that will be played on 26th and 27th January 2019.