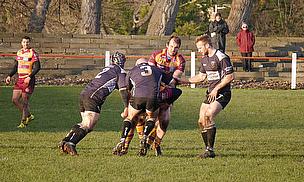 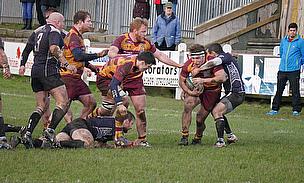 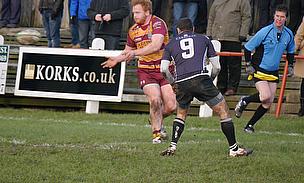 A battle of the roses that went the way of the white rose in a seven try demolition. This was a big win for the home team but more of that later; it wouldn't be Lancashire versus Yorkshire without moaning and complaints.

Normally, it's the referee who takes the bulk of the moans and the crowd were not disappointed with this display of inconsistency at the break down and high tackles. As a Lancashire based outfit, we like to compare Yorkshire Club's Pork Pies - despite a great effort by Otley, it is their local rivals, Harrogate, that continue to hold the prize.

The biggest moan is saved for the balls, not the ball-boys! The home team are celebrating 150 years and clearly they have not replaced the balls they use. To call them dirty is kind. The 1980's TV commercial for Persil described ingrained dirt and this was truly the case. Any ball manufacturers out there take note; we have had a whip round and 3 new balls will be with them on Wednesday.

The Tigers made the short journey over the Pennines to our Otley at Cross Green. With the sides on the same points in a very tight second group in the league there was a lot at stake from what looked on paper as a very close game.

With help from @sedgetiger we describe the game as follows-

"Right from the off Otley went for Sedge as they hammered any lose ball or any indecisiveness in what was a withering start."

Very quickly, it was Otley who had a scrum. The Tigers pack caused the much vaunted Otley pack to produce scrappy ball but  they set up great position out wide right for "the Otley fullback Arnold Ellison to whip in for the first try of the game in at the corner after eight minutes."

The Tigers have found re-starts difficult since losing 2nd row Louis McGowan to Caldy and this weakness was exposed by Otley, @sedgetiger commenting "from the re-start Sedge panic, they conspired to lose control of the ball.

"With Tigers winger Jamie Harrison flat out from bang to the head Otley's Steve Depledge seized the opportunity and seeing that no one is home as he takes the ball just inside his own half chips ahead, exploiting Jamie Harrison's injury, takes the ball on a the hoof from a very kind bounce and sprints unopposed out wide right for a second try on eleven minutes."

Winger Harrison had been out with concussion a few weeks earlier and the Tigers medical staff removed him from the field of play immediately. The reshuffle removing Andy Riley from fullback. It appeared that the Tigers only had four on the bench.

Otley were demonstrating a very competent line out and driving maul. Their pack were in a very confident mood each time the ball was in touch. At each maul they were driven on by scrum half Steve Depledge whose distribution all game being top class.

"Depledge picked out a great ball to start a good move from just outside the Tigers 22 that was started by man of the match outside centre Jack Mackie who broke for the line and turned the defence.

"Otley full back Arnold Ellison was a clever decoy taking the tacklers away from the centre, but the full back became active again with the centre popping the ball up for a good take and a simple try in at the corner for Arnold Ellison. Steve Depledge kicked the conversion" reported @sedgetiger

The Tigers defence in midfield had been cut to pieces by some precise and incisive Otley back play. It was now all backs against the wall as a rampant Otley were quicker and stronger and just wanted it more.

Otley's flankers were first to every breakdown and influential at each lineout. Another precise lineout was well defended by the Tigers pack but from the second phase there was a strong dogged run by hooker Ben Steele coming out of a mass of bodies and went in for Otley's bonus point try on 30 minutes.

"Standing behind the posts waiting for the conversion some strong words from from captain Juan Crous were delivered" and a clever restart by the Tigers saw Ryan Parkinson getting to the ball first. At the resulting breakdown quick ball to Max Ashcroft who committed the Otley tackler before  finding Curtis Strong for Tigers first try on 32 minutes.

The Tigers scrum had held up well despite intense pressure but the Otley forwards were dominating the lineout and breakdown. Time after time the Tigers failed to secure the ball at the breakdown and gave a number of penalties away.

With renewed confidence there was a great phase of play out wide by the pack triggered by good work from Ryan Parkinson and Billy Emerson establishing great position for Callum McShane to find Matt Riley who made a huge long pass to find Curtis Strong in space as the winger let his feet do the talking, leaving his marker in his wake for his and Tigers second try on 38 minutes.

Before the restart Tigers introduced prop Jack Warrington for flanker Cam Thompson; an intriguing tactical decision by the coaching staff.

So at the interval it was the home team who were deservedly in the lead but a sense that if the Away team could reproduce the last ten minutes then it would be game on. The Otley team came out for the second half full of composure and confidence. It was clear they were going to start this half the way they had the first.

The Otley lineouts were excellent throughout and very well supported by some clever running from their backs. This combination allowed Otley to keep possession in and around the Tigers 22m line.

"It was not long to wait as the flood gates opened on 55 minutes which was not exactly against run of play in this very one sided half for the Tykes and strange as this may seem a Tigers breakout, the first of the game was cleaned up by Otley's inside centre Micheal Coady who returned it with a clever chip ahead that had Tigers covering two in all sorts of trouble.

"With no one taking control Otley's number 7 Micheal Heaton did the rest as he powered in at the right hand corner for try number five," was how @sedgetiger saw it.

He went on to report that, "Things went from bad to worse as more forward pressure from the Tykes pack with a withering maul which was heading straight between Tigers posts was stopped.

"From the recycled ball Otley's outside half threw a long pass to left winger Alex Beaumont for try number six on 64 minutes. With county honours in the bag for the Yorkshire men the icing was well and truly put ton the cake and fittingly it came from Jack Mackie who was exceptional all game.

With nowhere to hide Otley battered the Tigers with the defence missing tackles it was easy picking for Otley's outside centre Jack Mackie who went in for try number 7 on 69 minutes which was converted by Steve Depledge."

On reflection Tigers DoR Steve Hazzelby stated after the game: "We never turned up all game. We were second best in every department as we conspired to put more pressure on ourselves with penalty after penalty.

"Otley were very good value today and deserved the win. Our focus must now be on next weeks game against Stockport."

This was an outstanding display by Otley, dominant at the breakdown, clinical at the lineout and classy in the backs.

The Tigers coaches and players will reflect on the need to better secure and protect the ball. They might also want to think about their bench and how to use it.