Tigers hunt in a pack to overcome Hull 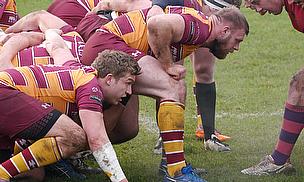 A pack rampant in the loose but with power and control in the set piece, this was a Tigers pack that meant business.

Both props were assertive and powered the scrum beautifully; even when Warrington was introduced for a fifteen minute cameo either side of half time, the scrum was solid. Warrington's two year RFU ban has ended and he found himself on the bench instead of Ben Black.

Parkinson and Crous were sublime in the row with precise work in the lineout. The back row powered their way over the gain line time and time again.

With Andy Riley at full back, the Tigers let loose Harrison and Strong on the wings to great effect.

"This was an interesting game for both outfits as Hull came to the game short on numbers with three players recently concussed and unable for selection.

"However they certainly took the game to Sedge with a highly spirited effort and great attitude throughout the game that should have been rewarded with more points.

"However it was the power of the Tigers pack that was the main difference between the two sides, devastating in the set piece and rampant on the hoof that Hull could not contend with.

"Steve Collins had an excellent game exploiting the space bringing into play willing runners to have the bonus point wrapped up by halftime.

"When Tigers lost the ball the work rate from man of the match flanker Billy Emerson who was top rate as he tackled chased and closed down waves of Hull attacks."

It has been a roller coaster season for the Tigers; when they retain the ball and kick well from hand they are one of the most dangerous teams around. However, this season has seen them look dangerous but fail to capitalise.

The club's website is very informative and demonstrates enormous balance in its reporting, this is echoed in the excellent commentary from Sedge Tiger - now on twitter  @sedgetiger

We would recommend you take a look at the weekly review
http://www.pitchero.com/clubs/sedgleyparktigers/news/the-friday-big-game-preview-tigers-v-hull-1342214.html