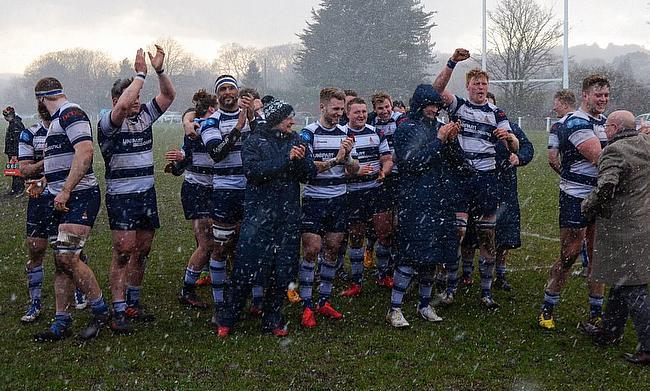 Cov on the verge, Sedge looking to solidify and Clifton aim for safety
Important wins for Clifton and Old Reds as survival battle takes another twist
Sale FC stroll to success
Fylde relegated whilst Coventry take a step closer to glory

A 24th victory of the season saw Coventry secure promotion to the GK IPA Championship following a victory over Caldy.

Rowland Winter’s side have been sensational in English rugby’s third tier this term and another stunning performance on the weekend saw them seal the title.

There were also wins in National One for the teams directly below the newly crowned champions as Darlington Mowden Park and Plymouth Albion picked up victories.

The promotion race in National Two North has taken another twist after Stourbridge were beaten by Sheffield Tigers in the Midlands.

Defeat for Neil Mitchell’s side has seen them drop to fourth in the table while both Sedgley Park and Tynedale clinched victories over Otley and Wharfedale, respectively, to keep their top two ambitions alight.

Elsewhere, Blaydon were unable to move out of the bottom three after a defeat to Huddersfield while Luctonians remain rooted to the bottom after an away loss at Macclesfield.

In National Two South, both London Irish Wild Geese and Clifton sealed potentially vital triumphs in their battle to avoid the drop as wins against Redruth and Bury St Edmunds has created some distance between themselves and danger.

At the right end of the table, both Cinderford and Chinnor earned comfortable wins while there were also victories for Tonbridge Juddians and Worthing Raiders.

Coventry thumped Caldy to win the National One title and earn promotion to the GK IPA Championship.

At a snowy Paton Field, a blistering first half display from Cov saw Scott Tolmie (2), Max Trimble, Tom Jubb, Alex Grove, James Stokes and Jack Preece all go over to give them a 43-0 lead.

A score just after the break from Rhys Hayes opened Caldy’s account, but tries via Brett Daynes and Rob Knox put the icing on the celebratory cake for Coventry.

Caldy did score again through Nick Royle, but it was only a faint consolation as Rowland Winter’s men sealed top spot with five games in their season to go.

Winter told Coventry’s website: “We set the target to the boys back in pre-season that we wanted, if we could, to top every part of the league and be the best in attack and defence.

“We said the real target was to get the club back up to the Championship and become an established club at the top end of that, and we’ve achieved part one.

“I’m over the moon, delighted – of course I am – but now we need to finish off this season the right way and create a lot of momentum to take into next season and keep pushing forward.”

Darlington Mowden Park arrested a run of three straight defeats as they secured a victory over Cambridge at Volac Park.

Jack Payne and Adam Radwan dotted down as the visitors took a 12-3 lead into the break while Dan Lewis landed a penalty for Cambridge.

Rob Conquest went over to reduce the deficit after half-time.

Darlington responded with two Gary Law penalties, but a Michael Ayrton try brought Cambridge to within three points of the away side.

However, Ben Frankland was able to touch down in the final minutes for DMP to seal their first win for just over a month.

Tries from Nick Hankin and Rob Duff helped the away side into a 10-7 lead by half-time with Cam Setter scoring for the hosts.

Plymouth clawed themselves into the lead with a Luke Chapman try just after the hour before a Matt Shepherd penalty clinched the win for Kieran Hallet’s side.

Sedgley Park strengthened their position in the top two of National Two North as they narrowly beat Otley at Park Lane.

But they trailed heading into the interval as Oli Goss added to Paul Petchy’s opening score to give Otley the lead.

Both sides exchanged scores after the restart as Sam Lowthion’s effort was cancelled out by a penalty try for Otley, but with seven minutes to go, Sedge secured the victory as Tom Coe barged his way over.

Tynedale moved up to third place in National Two North as they came from behind to beat Wharfedale.

The visitors were 14-12 behind at the break, but another superb second half from Tyne means their promotion ambitions are very much alive and kicking.

Matty Outston, James Spencer (2) and Guy Pike all ran in tries for Scott Lawson’s side who also secured their first away win since December.

A score from Oli Cicognini plus a penalty try was all Wharfedale could muster up at the Avenue.

The visitors led 10-7 at the break thanks to a try from Jamie Broadley and Ed Simmons.

Nick Murphy and Chad Thorne both went over after the restart to give Stour the advantage, but Farrell dotted down for the Tigers to bring them back into the contest.

The hosts may have thought they’d done enough to win this encounter when Mark George touched down, but the victory was snatched away from them as Farrell’s late kick won it for Sheffield Tigers.

Defeat for Stourbridge has damaged their promotion hopes as they are now five points off the top two and they have also played a game more than second placed Sedgley Park.

Blaydon missed the opportunity to move out of the relegation places after they were beaten by Huddersfield at Crow Trees.

Field led by nine points after an entertaining first half with Tom Owen, Adam Blades and Elliot Knight scoring tries.

Austen Thompson’s score after the break clinched the bonus point and the game for Gareth Lewis’ men. Blaydon could only add a Calum Eastwood try to scores from Keith Laughlin and Drew Davison.

The loss for the North East side means they are now three points adrift of safety with six games in their season remaining.

Luctonians are still 12 points off safety after falling to a defeat against Macclesfield at Priory Park.

Ryan Watkins’ side do still have three games in hand, but this was another dent in their survival ambitions.

Tries from Charlie Reed, Sam Moss, Lewis Barker and Myles Hall secured a hard-fought win for Macc in front of their own supporters.

Two Frank Kelly efforts in the second period proved to be a consolation for the Lucts, who still remain at the foot of National Two North.

Cinderford eased to their 19th successive victory of the season as they comfortably beat Old Redcliffians at Dockham Road.

The Foresters’ first try via George Porter came inside the first two minutes as the league leaders dominated this contest from the first whistle.

Old Reds scored in each half with Mason Gill-Watkins and Tom Hargen dotting down for the visitors.

Chinnor beat Barnstaple to take another step towards securing a top two place in National Two South this season.

Matt Williams’ side are now 19 points clear of third placed Redingensians with five games in their season remaining.

MacDonald completed his hat-trick in the second period while Alex Dancer and George Oliver all touched down for the hosts.

Will Topps and Alfie Pennyfield crossed for Barnstaple, but they are now eight points clear of the relegation zone after this defeat.

London Irish Wild Geese picked up a crucial result against Redruth as they earnt a bonus-point win to move 11 points clear of the relegation places in National Two South.

Redruth’s points had come via two Richard Kevern penalties and scores from Tipiloma Kivalu and Ed Pascoe, but they fell behind at the start of the second period as Scott Moore crossed for the hosts.

However, the Reds nudged themselves back in front through Jack Simmons and they extended their advantage when Dean Bonds touched down just after the hour.

But, this thrilling contest had a final twist as two George Owen tries in a five minute period clinched an important win for Lee Starling’s side.

Tonbridge Juddians returned to winning ways as they clinched a victory over bottom of the table Broadstreet.

Tries from Will Coldrick, Finlay-Coxon Smith and Tom Kendrick helped TJs seal their 13th win of the season whilst Broadstreet’s hopes of survival are starting to fade away as they are now 17 points from safety with five games in the season remaining.

Clifton are now nine points clear of the relegation zone in National Two South after a superb win over Bury St Edmunds.

The hosts made a good start with Callum Roberts (2) and Max Woodward both scoring to give Clifton a 15-0 half-time lead.

Hooker Tristian King powered over to give Bury the perfect beginning to the second half, but tries from David Hill and Alex Giltrow completed back to back wins for the Lavender and Blacks.

Tries by David McIlwaine and Kemp Price gave the Raiders a half-time lead as the home side managed the weather conditions better in Sussex.

The hosts added to their tally after the restart as Harry Forrest dotted down, but Canterbury responded through a Frank Morgan try.

Both sides were then shown yellow-cards and during that period, Worthing were able to regain control as Henry Birch went over.

However, The City Men then sparked into life as Jonathan Murray scored a brace to set up an interesting finish, but Worthing held on for their first win since February 10th.