Cov on the verge, Sedge looking to solidify and Clifton aim for safety 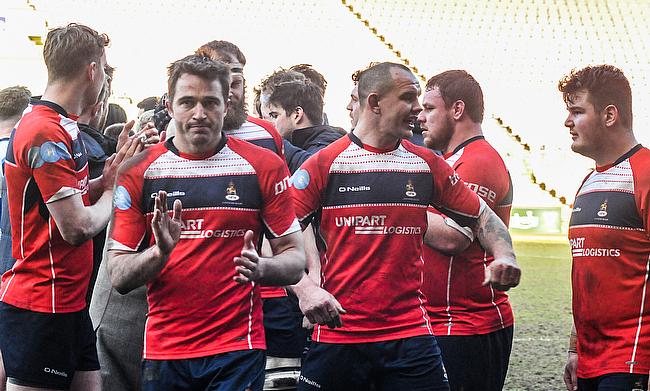 National One leaders Coventry have the chance to seal promotion to the Championship this weekend, while there is also a whole host of action across both National Two divisions.

Coventry captain Phil Boulton is concentrated on facing Caldy in National One on Saturday, saying that his side must remain focused if they are to clinch the title this weekend.

Cov are 30 points clear at the summit heading into their fixture at Paton Field and a bonus-point victory for Rowland Winter’s side would see them promoted to the GK IPA Championship for the first time since 2009/10.

“The chance we have this weekend is massive because in all but name, Coventry is a Championship club,” said Boulton. “I can’t really speak about what has gone on previously, but Rowland has made it clear that reaching the next level has always been the objective.

Coventry club captain Phil Boulton on the reason for their success, a standout moment in the season and why a professional approach is necessary if they are to clinch the #Nat1 title this weekend. pic.twitter.com/16Q8nmvRs5

“He knows it is a difficult thing to do, but it looks like it is going to happen. However, we have been really keen all year to take one game at a time.

“As cliché as it is, that has been our focus the whole time and even know it potentially means a bit more this weekend, we are still approaching Caldy in the same manner.”

Darlington Mowden Park are the side which has been the nearest challengers to Coventry throughout this campaign and despite the race for promotion now being all but over, they’ll be hoping to return to winning ways when they travel to 11th placed Cambridge. The North East side have lost their last three matches so Danny Brown’s men will be itching to bounce back at Volac Park this weekend.

DMP will also have an eye on proceedings at Silver Leys as fourth placed Plymouth Albion visit Bishop’s Stortford. Despite a setback last Saturday against Ampthill & District, Albion sit just five points off second spot and they also have a game in hand, but this will not be a straightforward task for Kieran Hallet’s side.

Sedgley Park could move to within three points of league leaders Sale FC if they secure a bonus-point win against Otley on Saturday afternoon.

Sale are not in action this weekend so Matt Bebbington’s side have the chance to cut the gap, but at the same time, they can also strengthen their top two aspirations. As for Otley, they will be looking to continue the fine form which has seen them eight points clear of the relegation zone.

“It was unbelievable to watch,” Sedge’s Geoff Roberts told the Bury Times after their 45-0 win over Chester last Saturday. “They just couldn’t live with us.

“It was unexpected to end the day in second spot. Stourbridge lost to Sale and the big shock was Hinckley losing to Otley. That is a result that should focus our lads' minds ahead of this weekend.”

While Sedge are in action at Park Lane, promotion rivals Stourbridge will be attempting to get back to winning ways at home against Sheffield Tigers, while fifth placed Tynedale travel to Wharfedale aiming to stay in the mix.

Macclesfield will be hoping to distance themselves further from the relegation places as they welcome bottom of the table Luctonians to Priory Park. Macc are 10 points clear of danger while Luctonians will be in need of the victory as they currently sit 12 points from safety with four games in hand.

Fellow strugglers Blaydon could climb out of the bottom three if Wharfedale lose this weekend and they win at home against Huddersfield.   Elsewhere, Chester's game with Leicester Lions has been postponed.

League leaders Cinderford are back at Dockham Road this weekend to take on Old Redcliffians, while in-form Chinnor host Barnstaple on a busy weekend in National Two South.

Cinderford are nine points clear at the top of this division as they continue to chase promotion, but their remarkable winning streak was in jeopardy last Saturday.

The Foresters left it late to seal their 18th successive victory as they edged past a spirited Barnstaple outfit and they will have to be fully focused when Old Reds visit Gloucestershire this weekend.

Saul Nelson’s side are still battling for survival in National Two South, but four wins from their last eight matches has left them four points off safety.

What a game, Cinderford with a well deserved win with a lot to battle against, huge effort from all the boys ????

With third placed Redingensians not in action this weekend, Taunton Titans can move back into the top three when they visit Henley Hawks on Sunday, while Chinnor will be looking to strengthen their position in second spot by extending their unbeaten run to five matches against a Barnstaple side out to distance themselves from the relegation places.

Chinnor have battled hard since their defeat to Cinderford back in January and after the disappointment of missing out on a top two place last season, Matt Williams’ side are looking good to take the next step this term.

Redruth – a team which has won five of their last six matches – will be aiming to continue their momentum when they travel to London Irish Wild Geese this weekend while Bury St Edmunds meet Clifton at Station Road with the hosts coming into this fixture on the back of a welcome victory as they aim to beat the drop.

Broadstreet Director of Rugby Paul Hurst admitted last week that his will not give up as they aim to avoid an immediate relegation from National Two South. Street are 13 points adrift of safety with six matches remaining following their victory over Worthing Raiders and this Saturday, they head to eighth placed Tonbridge Juddians. TJs come this fixture aiming to bounce back after a defeat against Old Redcliffians.

Elsewhere Worthing Raiders, who are one place and three points below Tonbridge Juddians, welcome Canterbury to Roundstone Lane with both sides desperate to respond after disappointing defeats in Round 25.