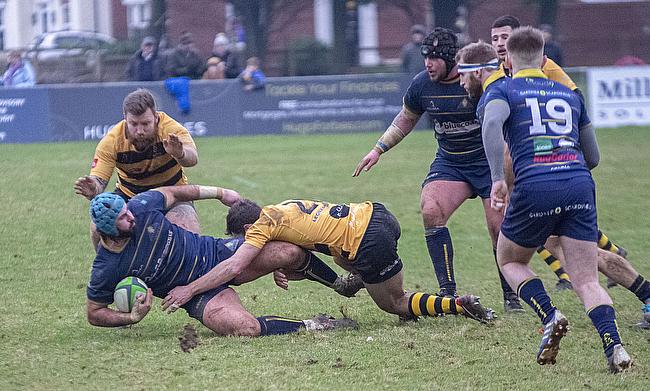 Clubs looking to attack Round 24 as finish line starts to come into view
Talking Rugby Union to power National League Rugby Live Stream
A weekend that could shape the season: Why Round 23 in the National Leagues is worth taking note of
Title race blown wide open in National Two South after Esher defeat Redruth

Promotion and relegation is a topic which continues to be discussed, but the drama the different permutations inject into the final few furlongs of a season makes the state of play in divisions such as the National Leagues incredibly exciting.

Sale FC’s excellent run of form continued against Rams RFC last Saturday, but it was once again a remarkable rescue act by Jonathan Keep’s side. The North West outfit were 21-5 down at one stage but snatched a 22-21 victory right at the death to extend their winning streak to seven matches.

Their recent revivals - v Rams and Rosslyn Park - have kept Sale firmly in the promotion conversation and they head into Round 24 just three points off the top. Whilst ‘The Dogs’ are battling for the title, their opponents on Saturday, Darlington Mowden Park, are fighting for an altogether different goal. The North East club currently sit five points clear of the bottom two but rivals Leeds Tykes do have two games in hand over them.

Garry Law’s side travel to Heywood Road this weekend following a 22-20 defeat to Cambridge, but DMP did lead their Round 23 fixture 15-0 midway through the first half. They also showed exactly what they are capable of in their last away outing at fifth-placed Rams, but if they are to leave Greater Manchester with a victory, it would be their first win on the road since November.

?? | This week, we caught up with Yorkshire-born Fly-Half, Ezra Hinchliffe, to discuss returning to Yorkshire, and the threats which @LeedsTykes may pose on Saturday afternoon. Ezra has been a standout player this year for the Ravers after signing from @HeathRUFC!#Ravers pic.twitter.com/6FKmEtgrur

Sitting above Sale in the table are Rosslyn Park (2nd) and of course league leaders Caldy. The latter are two points clear at the top and Gareth Davies’ side - who have lost just one of their last 20 matches - take their 11-game winning run to Leeds Tykes this weekend. The Yorkshire outfit come into this only four points from safety following their dramatic 22-21 victory over Blackheath last time out.

As for Park, Henry Robinson’s score helped them over the line against Cinderford in Round 23 and Kieran Power’s side return to The Rock for the first time since the beginning of February to face Birmingham Moseley whilst Cinderford (6th) go to Bishop’s Stortford.

Down at the foot of the division, bottom of the table Tonbridge Juddians host Cambridge whilst Plymouth (13th) - who sit four points clear of the trapdoor - welcome Chinnor to Brickfields and Blackheath (12th) visit Taunton Titans.

This week, The National League Rugby Review Show’s Key Game comes from National Two North as Sedgley Park (2nd) host Stourbridge (5th). The home side are aiming to equal their winning run of seven matches which they stitched together at the beginning of the season and if they were to achieve that record in Round 24, then the Tigers would very much be in the picture to challenge Hull (1st) for top spot.

After this weekend’s clash with Stour, Scott Barrow’s men fulfil their first game in hand against Huddersfield before travelling to the league leaders on March 26th. If Sedge were to pick up maximum points from their next three matches, there is a scenario where they could be one point off the summit heading into April.

Right now, they are 11 points behind Hull so a lot of things need to fall in their favour and Stourbridge won’t make life easy for the hosts on Saturday. Neil Mitchell’s men have scored 50 tries in their last seven games and they also ended Sedge’s last lengthy unbeaten run back in November in front of the National League Rugby cameras. Both clubs have produced some highly entertaining rugby this term and we expect more of the same at Park Lane.

As mentioned, Hull are the team to catch in this division after some late heroics from Reece Dean and Mike Adlard saw the Yorkshire club clinch a dramatic 20-17 victory over title rivals Rotherham Titans in Round 23.

Keeping cool when the pressure is on? ??@hullrugbyunion ??

The #Nat2n league leaders secured a late victory in Round 23 and if you missed the action, you can subscribe to The National League Rugby Review Show..!

The win for Gary Pearce’s charges was their 13th on the trot and their route towards promotion to National One continues away at Wharfedale this week.

Also on Saturday, Fylde host Sheffield Tigers and Rotherham Titans - who will be looking to bounce back from that setback against Hull - host Chester.

The Titans, who were voted National Two North’s Club of the Month for February by England Rugby, are holding a collection at Clifton Lane to support humanitarian aid efforts for refugees currently fleeing Ukraine. For more info, click here.

Elsewhere in National Two North, Hull Ionians are on the road against Blaydon and in-form Tynedale take on Harrogate whilst Luctonians are at Bournville and Loughborough Students face Huddersfield.

After three top-of-table clashes in recent weeks, you could say the intensity of this National Two South title race will cool down in Round 24, but we don’t think that will be the case.

As it stands, three points separate the top four in the division with Redruth leading the way ahead of their trip to Bury St Edmunds this weekend. Second spot is occupied by Esher, whose recent wins over their fellow promotion rivals keeps the ball, to an extent, in their court.

The Eees’ are two points behind Redruth with a game in hand, but that fixture comes against third-placed Worthing Raiders next Saturday and the Sussex club are currently also level on points with Esher.

The Raiders have put together a stunning run of nine straight victories and if they are to head into that huge match against Peter Winterbottom’s charges still in control of how their 2021/22 story plays out, then they will most likely need to beat Henley Hawks (5th) this weekend.

The Hawks have the best vantage point to see how this gripping promotion tussle unfolds and Nigel Dudding’s side enter Round 24 unbeaten in their last four outings. The men from Dry Leas did record a 43-26 win against Worthing back in November, but with injuries hampering their side, could they really pull off another victory and dent their opponents’ aspirations?

The aforementioned Esher are at home to Westcliff on Saturday whilst fourth-placed Clifton will be looking to get their promotion challenge back on track when they travel over to Guernsey Raiders.

Elsewhere, Leicester Lions face Dings Crusaders and Old Albanian come up against Barnstaple whilst Barnes take on Rochford Hundred and Hinckley are at Canterbury.

Subscribe to The National League Rugby Review Show to catch the best tries and biggest moments from Round 24...