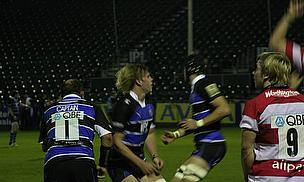 Toulon's playoff hopes were dented after they were comfortably beaten 19-12 by Clermont on Friday.

Stade Marcel Michelin is a fortress for Clermont and it will take a determined team to beat them there.

With international players returning to Top 14 action there was a lot of quality on display and some players, like Morgan Parra, were playing with an eye on selection for next weekend's internationals. Jonny Wilkinson wasn't released for Toulon and his goal kicking was sorely missed by Toulon.

It was a typically intense game that had skill and physicality in equal measure. Three players visiting the sin bin is a fair reflection on the passion displayed by both sides.

Clermont's start illustrated why they are so formidable at home. After winning the kick-off they went through the phases with both backs and forwards getting involved. Toulon infringed at the ruck and Morgan Parra opening the scoring for the home side.

After the restart a min brawl broke out which set the tone for the rest of the half. Both sides were involved in relatively minor off the ball incidents during the whole game.

Clermont's outside backs looked very dangerous and a lovely offload in the backline set winger Wesley Fofana away. He linked well with Rougerie who brought play into the Toulon 22. With advantage in his favour Parra dinked a beautiful drop goal between the posts.

Toulon started to come into the game with scrumhalf Pierre Mignoni dictating the game with his busy style of play. Quick ruck ball set Winger Lovobalavu but his pass inside was thwarted by the Clermont cover. They didn't have to wait long for their score as George Smith did well to draw his man and release centre Fotunuupule Auelua, who ran over Brock James enroute to the line. Clermont Winger Julien Malzieu was very pedestrian in defence during the build-up. His lack of confidence at the moment is showing and he isn't living up to the high standards he set for himself in past seasons.

Contepomi's first half kicking was shocking with him missing the conversion and two simple penalties. This overshadowed his performance in open play where he showed good the handling and jinking feet when he ran at the Clermont defence. He looks over the hill now, doing things at a far diminished capacity than we are used to.

Clermont responded strongly with their frontrow playing the Toulon try was a personal insult. Domingo and his colleagues were involved in winning to penalties, both of which Parra converted.

The physicality boiled over before half time when both sides had players sent to the sin bin. Julien Malzieu and Toulon hooker Jean-Philippe Genevois clashed near the touchline and both men were show yellow cards.

Toulon was constantly attacking as the half came to a close. George Smith and Mignoni were excellent at getting their team mates involved with deft offloading and running lines. The half ended without a further Toulon score as their handling let them down close to the Clermont line.

Toulon started the second half very aggressively. Their pack worked their way near the Clermont line and after winning a penalty Mignoni opted for the corner. Unfortunately for Toulon their gutsy decision was not rewarded after a knock on at the resulting lineout.

Clermont punished them dearly by scoring their first try of the match. Rougerie threaded a delicate kick behind the Toulon defence and Julien Bonnaire showed great skill to collect the ball and touch down.

The ball flowed from end to end for much of the half but neither side was clinical enough to put further points on the board. Clermont lock Jamie Cudmore was also sent to the bin for violent play. This coincided with the substitution of scrumhalf Mignoni, a decision that Philippe Saint-Andre surely regrets this morning. Toulon attacking threat was severely reduced after he left the park.

Toulon finished off the scoring with a try, to collect a losing bonus point that they deserved. A bouncing ball in the Clermont 22 wasn't cleared and replacement flyhalf Romain Barthelemy raced through to score.

Man of the match

Rougerie showed why he is the starting at 13 for France. He was part of most of the Clermont attacks and he mixes his power and offloading games very well. Despite going down in a losing effort Mignoni and George Smith were outstanding. Anyone that thought Smith came here just to collect a paycheck, myself included, are mistaken. He hasn't lost any of his combativeness at the breakdown but what impressed me was his link play around the pitch. He was hungry for possession and was popping up all over the field to give or receive a pass.