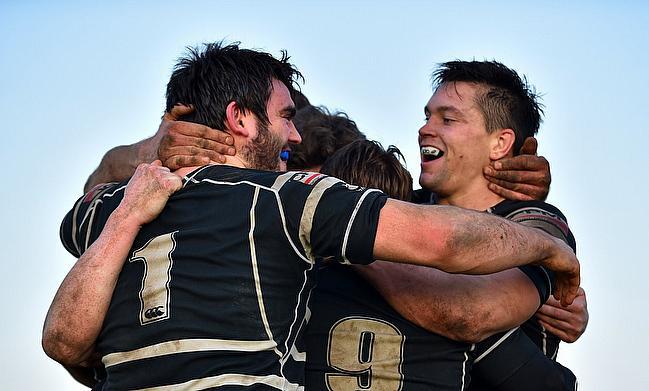 Chinnor close in on top two while fates could be sealed in National Two South
Cracking victories for relegation candidates while Kingdom helps Taunton to Easter win
Hull Ionians out to bounce back, Luctonians + Blaydon battle and Taunton go to Henley
Old Reds edge Broadstreet to increase survival hopes

Chinnor ran in seven tries as they beat Taunton Titans to secure a top two finish in National Two South.

Matt Williams’ men needed just a point in Somerset to seal a minimum of a play-off place and after narrowly missing out on second spot last term, the Oxfordshire side have edged closer to potentially playing National One rugby next season.

At the other end of the division, Broadstreet have suffered an immediate relegation to the fifth tier of English’s rugby after a loss to Barnstaple.

The Midlands club have won on just five occasions this year in what has been a tough season for Street.

Just above Broadstreet, Wimbledon and Old Redcliffians picked up crucial victories as they continue to battle for safety while London Irish Wild Geese have slipped closer to danger following a humbling defeat away at Canterbury.

Elsewhere, Cinderford have taken another step towards the National Two South title after a solid victory against Redruth while third placed Redingensians were beaten by Bury St Edmunds and Clifton made it four wins on the trot with a victory over Henley Hawks.

Cinderford took a huge step towards the National Two South title as a commanding second-half display saw them come away from Redruth with their 21st successive victory of the campaign.

The Foresters are eight points clear of second placed Chinnor with three games in the season remaining.

Reuben Norville’s first half-try plus scores from Ed Bouge plus the kicking of James Moffat put Cinderford in command before Liam Hemming crossed late on.

Phil Chesters scored a hat-trick as Chinnor secured a top two finish in National Two South with a thrilling win over Taunton Titans.

Matt Williams’s side required just a point from this fixture to clinch a minimum of a play-off spot and the Oxfordshire outfit got the job done in style.

In terms of the visitors, Aron Struminski got Taunton on the board midway through the first period before two tries from Freddie Fraser kept them in the contest before the break.

The Titans crossed on two more occasions thanks to Jack Claydon and Paul Davis, but Chesters made it safe with his third try of the afternoon before Taunton scored twice more through Claydon and Oli Carter.

Chinnor did control this encounter throughout with a double from Chesters as well as scores from Jack Ramshaw, Jack Gilding and Orisi Nawaqaliva which helped them into a 16 point half-time lead.

Will Bordill and Josh Barton went over in the second period for Chinnor who have now won their last seven matches.

Dwayne Corcoran, Collen Smith and Dan Swithenbank all crossed for Jon Curry who secured his first win as head coach at the Haberden.

Winger Jak Rossiter twice crashed over for the away side but despite a late effort from Josh Collis and another try for Rossiter, the Rams failed to complete the fightback.

Clifton are now all but safe from relegation in National Two South thanks to a fourth consecutive win against Henley Hawks.

A penalty try plus scores from Calum Roberts and Will Pomphrey put the hosts 19-17 up at the break, with Henley responding through Dave Hyde and a penalty try.

The home side slotted a penalty after the interval to extend their lead and a fourth try of the afternoon secured the bonus-point on the hour.

Henley did respond with a score of their own, but Clifton were able to see out another impressive result.

Wimbledon have kept their hopes of staying in National Two South alive after a dramatic win against Tonbridge Juddians.

The game was level at 5-5 at half-time as the Dons cancelled out Mike O’Sullivan’s try.

Next weeks fixtures. A win away at Broadstreet would keep us in the mix as Old Reds and Barnstable will take points of each other. #COYD pic.twitter.com/d8xzNH0z5D

Both sides exchanged tries after the break with Charlie Edwards going over for TJs, but Wimbledon went ahead thanks to a drop-goal.

However, Finlay Coxon-Smith’s try crashed over to put the visitors back in front, but a powerful score from the Dons clinched the victory which leaves them 12 points from safety with three games to go.

London Irish Wild Geese are just three points clear of danger as they slipped to a heavy defeat away at Canterbury.

Brad Clements scored Wild Geese’s only try in the first period as they trailed 36-7 at the break.

Lee Starling’s side struggled after the restart as Canterbury picked up a welcome victory on their own turf.

Old Redcliffians are now three points from safety in National Two South as they beat Worthing Raiders to keep their survival bid alight.

Kiyan Wiltshire and Ethan Doyle gave the hosts a 21-10 half-time lead, Worthing scoring through Jide Ajayi and a penalty from Matt McLean.

Craig Owen put Old Reds further in front before two yellow cards gave Worthing a route back into the contest.

Sam Boyland crossed when the hosts were reduced to 13 men, but Old Reds were able to add to their advantage through a Kieran Hill penalty.

Hill kept the scoreboard ticking over with two more penalties, but the Raiders responded again as Boyland and McLean both crossed to cut Old Reds’ lead to just a point.

However, any nerves at Scotland Lane were eased when Sam Smith dotted down and with fixtures to come against Barnstaple and Broadstreet, Old Redcliffians still believe they can avoid an immediate relegation.

Broadstreet have been relegated from National Two South following a defeat away at Barnstaple in an ill-disciplined game at Pottington Road.

Both sides received a red card in the second half, but before that, Street led this contest 12-9 at the break thanks to two tries – one coming from Nick Rhodes.

Barum had kept in touch with the visitors following three Jake Murphy penalties, but the flash point in the game came midway through the second half as Ben Hilton and Cliffie Hodgson were dismissed.

Barnstaple then went ahead as Gareth Evans touched down and despite Street battling back in the final 20 minutes, their efforts were not rewarded and their relegation was confirmed.