Canterbury aiming to sign off in style before play-off clash 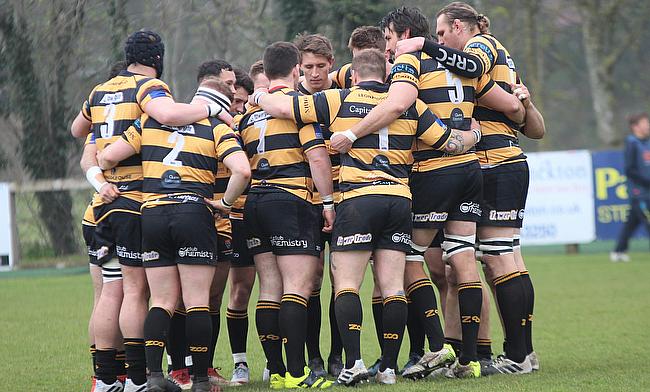 Canterbury will be looking forward to their National Two play-off at the start of May, but first they conclude the domestic campaign by hosting National Two South champions Rams RFC.

Eleven wins on the bounce has confirmed second spot in the division for Andy Pratt’s side and the City Men will now be preparing for an historic fixture against Chester next weekend.

However, Canterbury will be eager to continue their good form when they face Rams on Saturday as the top two sides conclude the season in Kent.

Third place is also still up for grabs in National Two South and it is Tonbridge Juddians who currently sit in the bronze medal position. Peter Dankert’s side have been brilliant this term and they round off the campaign away at Birmingham & Solihulll whilst Henley Hawks (4th) entertain Bury St Edmunds.

Other fixtures this weekend include Old Albanian’s trip to Guernsey and Redruth against Dings Crusaders while Barnes take on London Irish Wild Geese.

Twenty-seven victories. 134 points accumulated and over 1,000 points scored. It has certainly been an historic and sensational campaign for National Two South champions Rams RFC. Seb Reynolds’ side have hardly put a foot wrong all term and their promotion to National One was confirmed in Round 28 when they defeated Clifton. The Rams thoroughly deserve their place in the third-tier next season and they will also be keen to sign off with an eighth straight win against Canterbury on the final day.

We all felt the relief that our Chairman Giles Hilton did after the Barnes game where we secured our place in the play off. Tomorrow is a game of pride, maybe a dress rehearsal for next season? We will be showing @Rams_RFC why we are #UndefeatedAtHome all season. We are #OneClub pic.twitter.com/iJDTUEXuyq

It is easy to forget that this is a clash between the top two this weekend because of Rams’ dominance, but Canterbury have also shown their class to nail down a play-off spot. Andy Pratt’s side secured their 11th win in a row against Barnes to set up a showdown with Chester at the Marine Travel Ground on May 4th. However, despite both Rams and Canterbury having something to celebrate, the City Men will not want to take their eye off the ball too much as they will be eager to continue their momentum and end their domestic campaign with a 100 per cent home record.

The achievement of Canterbury to secure second place in National Two South with a total of 121 points is exceptional, but imagine how third-placed Tonbridge Juddians are feeling. I suspect they are proud of their superb performance this season, however, Peter Dankert’s side have won 12 games in a row and have lost just one of their last 21 matches heading into this weekend.

That sort of form is worthy of a top two finish, but TJs will now be focusing on sealing the bronze medal position following an excellent campaign. Their final trip of the season sees them travel to Birmingham and Solihull who had their fate confirmed in Round 29. The Bees battled hard against newly crowned champions Rams RFC, but Pete Glackin’s side couldn’t avoid relegation on their return to the fourth tier. After suffering a points deduction at the beginning of the season, credit must go to the Midlands club for taking the fight to the penultimate weekend of the campaign and now they will want to end their adventure in National Two South with a victory in front of a home crowd.

No-one can question the mindset of Henley Hawks as we enter the final weekend of the season. Nigel Dudding’s side have probably known for a few weeks that the likelihood of them sneaking back into the top two was slim considering Canterbury’s relentless form, but the Hawks have not taken their foot off the gas. Ahead of welcoming Bury St Edmunds to Dry Leas, Henley have scored 162 points in their last three thumping victories against London Irish Wild Geese, Guernsey and Old Albanian.

The Hawks fans will be hoping for more of the same when Henley host Bury St Edmunds and the away side come into this fixture aiming to secure their joint-highest finish of sixth place in National Two South. The Wolfpack had been on a run of four straight defeats and it was easy to say their minds were already on next season, but Nick Wakley’s men ended their home campaign with 53-7 win against London Irish Wild Geese in Round 29. A seventh away triumph of the term would secure a top six finish for Bury so can they stop a rampant Henley on the final day?

Taunton Titans may have known for a while that they would finish in fifth place this term due to the sizeable gaps between third spot and sixth position, but they head into the final day of the 2018/19 season with a century of points in their sights. Tony Yapp’s side have once again been unable to nail down a top two finish, but Taunton continue to produce consistent campaigns which does provide plenty of positives moving forward.

Huge thank you to Peter Gavin for all your hard work and great attention to... https://t.co/LOQNpifEBG

Last time out, the Titans defeated Guernsey to move on to 99 points so victory away at Worthing Raiders this weekend would surpass their tally of 101 points from last term. As for Worthing, they managed to confirm their safety for another season in National Two South as they backed up their crucial win over Old Redcliffians with a victory over Dings Crusaders in Round 29. Jody Levett’s side will now be keen to end a mixed campaign on a high at Roundstone Lane by securing a third triumph in a row.

The first Bristol derby of the campaign took place on the opening weekend of the season and on that occasion, Clifton sealed a 17-14 win. 29 rounds later, the final all-West Country affair takes place at Station Road with the hosts aiming for a repeat performance. Matt Salter’s side will be very pleased with their campaign as the Lavender and Blacks have hoisted themselves away from any relegation danger and they could finish in the top six if Bury St Edmunds stumble at Henley Hawks and they beat Old Reds.

But after losing that first derby of the term, Old Redcliffians will be keen for revenge and any extra pressure that could have been on this game for Saul Nelson’s side was lifted in Round 29. The men from Scotland Lane beat Redruth handsomely to confirm their safety in National Two South for another year and after four wins from their last five, Old Reds may fancy their chances of extending that record against their neighbours.

Old Albanian will be looking to end a mixed campaign with a strong performance in Round 30 when they take on Guernsey. After relegation from National One last term, OAs have found life tough back at this level but they have enough quality to be able to have a positive summer as they aim to make an impact on the 2019/20 season.

James Buckland’s men head into the final day of the campaign having conceded 50 points against Henley last time out, but they will be hoping to bounce back when they make their longest away trip of the season to Guernsey. The hosts on Saturday had their relegation confirmed in Round 28 after they suffered a heavy defeat against the aforementioned Henley and after an injury plagued debut season in the fourth tier, they will be keen to give their fans something to cheer about at Footes Lane on the weekend.

Following their 51-24 loss to Old Redcliffians in Round 29, Redruth’s hopes of concluding the campaign in the top six look to be all but over after they fell to a fourth loss in a row. After solid finishes in recent years, the Reds’ inconsistency and injuries haven’t helped them this term and they will now want to put on a display at the Recreation Ground against Dings Crusaders on Saturday.

Dings make the trip to Cornwall knowing they will be a National Two South team next season. Luke Arscott’s side may have suffered a defeat against Worthing Raiders last time out, but because Birmingham & Solihull lost to Rams RFC, it meant the Bristol outfit were safe for another year. The target may well have been survival for the Crusaders and if so, it has been a very satisfying campaign for them but following one win from their last eight games, a victory on the weekend would be a great way to end the term.

Barnes will enter the final weekend of the 2018/19 campaign with smiles on their faces as the club will be plying their trade at this level next term. After gaining promotion from London & SE Premier last year, there were a couple of moments in the season where Barnes were in danger of being sucked into a relegation scrap but now with one game remaining, they sit comfortably in 11th spot.

Barnes 1st XV play their last game of this season away to London Irish this weekend - read all about it here https://t.co/iyjtYtz1a8 @Barnes_Rugby @BarnesLadiesRFC

Three wins from their last five games saw them over the line, but for their opposition on Saturday, they were unable to drag themselves out of trouble. London Irish Wild Geese couldn’t beat the drop for a third year on the trot and now they will be preparing for life back in the fifth tier. However, the men from Hazelwood will want to wave goodbye to National Two South on a high note especially after shipping 166 points in their last four matches.