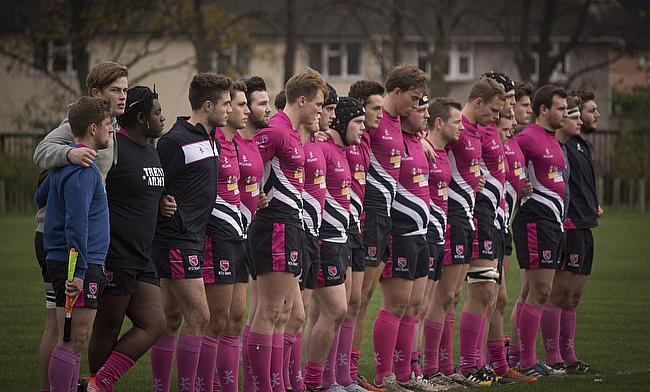 Travelling to Nottingham on Wednesday 17th February to report on a derby quarter final in the BUCS Midlands Conference Cup the big news was rain and more rain.

Heading into Nottingham from the M1 a new road greets the visitor and to the left the Clifton Campus of Nottingham Trent University.

There are 3 rugby pitches at the front of this modern campus and its #BUCSWednesday – already out are the ladies of NTU and Worcester University, The initial impression is a well-structured game and the final result 26-27 courtesy of @playtowhistle and @NTUWomensRugby.

NTU field two ladies teams in the BUCS competition and six men’s teams. This further emphasises the levels of participation in rugby union within Universities. Many reporting that the rugby union clubs are the largest by membership.

The game getting our attention is NTU 2s versus NTU 4s. A quarter final derby with the 2s in blue and the 4s in pink. The early exchanges go the way of the 2s and they are able to use their outside centre and left winger to unpick the 4s defence for a 10-0 lead. The pitch is in good condition despite the torrential rain and both teams look “up for it”

The 2s have a more effective scrum able to get a drive going on both feeds. It is the 4s hooker that shines in this situation. Consistently able to hook the ball whilst retreating and provide the 4s with clean ball. His performance continues at lineout time with accurate throwing in difficult conditions.

Both teams are aggressive in the tackle and there are a few ‘big hits’ around the park. The 2s winning the break down battle more regularly and thereby allowing their backs to take the attack to the 4s. Into the 2nd half and the 2s are taking the game away from the 4s. The 2s blindside flanker going over for two tries. The final score 34-0. The action hugely enjoyable, the comradery top draw and the importance of #UniRugby fully demonstrated. The coaching staff were excellent and the referee, despite being assessed, contributed to this game.