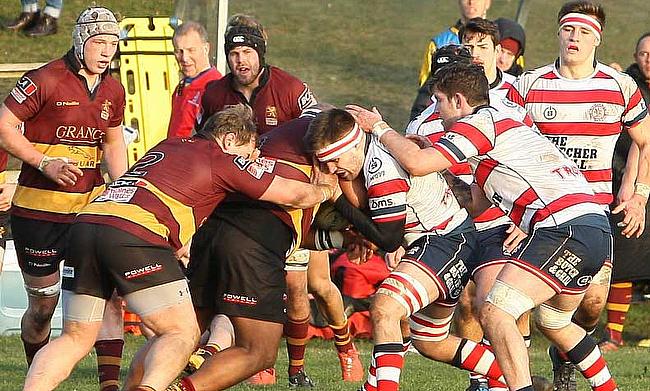 Ampthill overcome Rosslyn Park to remain in control
Rosslyn Park and Ampthill do battle, Chester clash with Huddersfield and Rams out to secure top two finish
Moseley hit back to see off rivals Esher
Resurgent Moseley aiming to further distance themselves from the drop

Ampthill and District maintained their position on top of National One as the leaders came from behind to beat rivals Rosslyn Park.

Mark Lavery and Paul Turner’s side are now four points clear at the summit and with three games remaining, their destiny is still in their hands.

Second placed Old Elthamians continued to keep the pressure on with a fine win over relegation-threatened Caldy.

Elsewhere, Bishop’s Stortford, Cinderford and Plymouth Albion all prevailed in Round 27.

James Pritchard kicked over a late conversion to help Ampthill and District pull off a crucial win over title rivals Rosslyn Park.

Arthur Ellis and Jon Mills both touched down for the visitors and Greg Lound also landed two penalties as Park led 20-0 at half-time.

The league leaders had it all to do following the break and Syd Blackmore barged his way over to get Ampthill on the board after 56 minutes.

Drama then unfolded in the final stages of this contest. Park’s Jack Gash and Charlie Amesbury were both sin-binned, with the latter been shown a yellow-card for preventing a certain try.

As a result, the A’s were awarded a penalty try and the hosts took advantage of the extra numbers as Josh Sharp scored a wonderful try before Pritchard kept his cool to slot over a potentially season-defining kick.

The victory for Ampthill leaves them four points clear at the summit, but Park are now nine adrift of the table toppers with three matches remaining.

Old Elthamians’ maintained the pressure on league leaders Ampthill and District following a comfortable win over Caldy, who remain in the bottom three.

Caldy’s Ben Jones kicked three penalties to give the home side a 9-7 lead, but Ben Howard’s second score for OEs and Rhys Morgan’s try just before half-time put the visitors ahead.

From there, Gavin Lach’s side stayed in control as Morgan grabbed his second before Dom Lespierre’s effort and a penalty try wrapped up the win for OEs.

OEs now sit just four points behind Ampthill as we enter the final month of the season while Caldy are six points adrift of safety.

Bishop’s Stortford continued their excellent form against Blackheath, who had Mike Perks sent off in the second half.

The visitors were able to open the scoring after 14 minutes as Nick Hankin crossed, but Stortford’s lead was cut immediately as Tom Stradwick dotted down on his 150th appearance for ‘Club’.

The home side took the lead after the break as they were awarded a penalty try, but it was Stortford’s turn to hit back as Baxter Wilson powered over the line to make it 14-12.

The game then shifted in favour of Stortford as Mike Perks was shown a red-card for Blackheath and the away side instantly took advantage as Reuben Bird-Tulloch darted over to seal Stortford’s ninth win from their last 10 matches.

The hosts led 17-12 thanks to scores from Harry Hone and Jack Preece, while Rotherham responded through Seb Nagle-Taylor and Connor Field.

Babarinsa’s first half score extended Cinderford’s advantage, but once again, Rotherham were able to keep in touch as Zac Poole dotted down.

However, that was as good as it got for the Titans as Joe Mullis and Babarinsa both scored in the final quarter to seal the victory for Paul Morris’ side.

Plymouth Albion made it seven home wins on the spin following a high-scoring bonus-point victory over Birmingham Moseley.

The home side led 26-14 at half-time at Brickfields thanks to tries from Connor Eastgate, Josh Skelcey and Jack Arnott (2),

Louis Roach had crossed twice for Moseley and he completed his hat-trick at the beginning of the second period to keep the visitors bang in this contest.

However, Albion were able to find an extra gear as Jamie Salter, Eastgate, Dan Mugford and Dean Squire all touched down to hand Plymouth the win while Rob Lewis grabbed a bonus-point for Moseley, who continue to edge away from the relegation scrap.

Cambridge gave their survival hopes a major boost in Round 27 thanks to an excellent bonus-point victory over Darlington Mowden Park.

Hooker Alex Rayment burrowed over to open the scoring, but Jordan Poole dotted down to strike back for the visitors.

1st time in a long time but well done to the players and support staff @camrufc for the BP win. Fantastic atmosphere at the club. Hope the injured players @MowdenPark are ok? #redwinetime pic.twitter.com/Y1ouQ8b6X5

Gary Law kicked the conversion for DMP and landed a penalty to give his side the lead, but the Blood and Sand responded as Gillian Benoy scored and Ben Penfold also nudged over a penalty.

The hosts then took control after half-time as Fin Creighton and Mike Ayrton both scooted over and despite Law scoring for DMP, Cambridge had done enough to secure a welcome victory.

The win for Richie Williams’ side leaves them six points clear of the drop zone with three games to go.

Loughborough Students boosted their chances of avoiding relegation with a comprehensive win over Chinnor at Kingsey Road.

The Students’ victory does keep them seven points from safety as Cambridge beat Darlington Mowden Park, but the Midlands club are continuing to fight for their National One survival.

Both Ben Christie and Callum Watson scored hat-tricks for Loughborough, while Oskar Hirskyji-Douglas also dotted down for the visitors.

It wasn’t utter dominance from Loughborough as Chinnor were 29-26 up at the start of the second period as Oscar Heath, Joe Dancer, Craig Holland and Danny Barnes all crossed, but away side were able to surge clear in the last half an hour to seal an important win.

Esher picked up a potentially vital win as Joe Beckett’s late try helped them come from behind to beat Sale FC in a thrilling game in Surrey.

Beckett went over with less than five minutes remaining after Esher had trailed 29-21 in an exciting encounter at Molesey Road.

Bonus point try for Esher from Joe Beckett. Kick is good so we now lead with 5 minutes to go 31-29. COME ON EEES!!

Three other tries, including scores from Dan Rowland and Jack Walsh, also sealed a bonus-point for the hosts, who remain eight points shy of safety with three games to go.

Sale looked as though they had done enough to win the game, with Connor Doherty crossing twice for the visitors, but Esher roared back to keep their survival hopes alive.