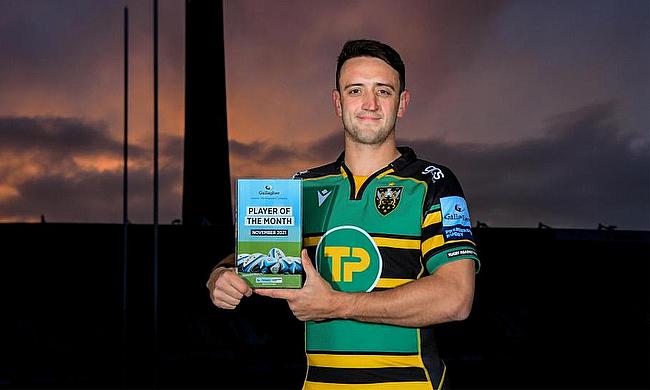 Alex Mitchell was today named Gallagher Player of the Month for November, and acclaimed as the “heartbeat” of the Northampton Saints by Ugo Monye.

The scrum-half has been a key figure in Northampton Saints surge into the Gallagher Premiership Rugby top four and Monye said: “When you look at Northampton Saints in detail, Alex Mitchell seems like the heartbeat and catalyst. They’re such an aesthetically pleasing team to watch, but there’s also been real productivity and outcome from their style of play which is very effective.

“I think he’s been a key contributor in it, be that from his set-piece play or just adding tempo into the game, he seems to get their team ticking. If you look at all the teams in the top four, the common denominator is that all their half-backs are playing well.”

The Saints lie third in the Gallagher Premiership Rugby table, having scored an impressive 35 tries and Monye, the BT Sport pundit and Gallagher ambassador added: “The big thing for Northampton this season is they’ve brought together all the key elements of their game, which they’ve been working hard on over the last couple of years. They’ve started the season brilliantly well, and I wouldn’t be surprised if they continued like that later into the season.

“The biggest compliment you can give Mitchell is that he’d have been disappointed not to have played a more significant role in the Autumn Nations Series, but he’s gone back to his club and bounced back really well.”

Club liaison for Northampton Saints and MD of Gallagher’s Leicester branch Chris Noah, said: “It’s great to see Alex Mitchell named Gallagher Player of the Month for the integral role he has played in an increasingly commanding and confident Saints side that has well and truly earned its top three spot. With his bursts towards the line, deft little dummies and masterful passing, you’ll always find Alex at the centre of the action and typically helping his team-mates over the line.

“He has certainly ensured there has been lots for local supporters to savour of late at Franklin’s Gardens, and fans can now turn their focus and expectations to the Big Game post-Christmas clash with Harlequins on the hallowed turf of Twickenham. Congratulations Alex!”

As part of his prize for being named Gallagher Player of the Month, Mitchell wins a shirt signed by the whole Northampton Saints squad and framed by Gallagher to gift to a charity of his choice, to help them raise funds for their chosen cause. Alex has chosen Niamh’s Next Step (www.nns.org.uk/)

Mitchell was judged by a panel of experts as the player who made the biggest impact in Gallagher Premiership Rugby in November 2021.