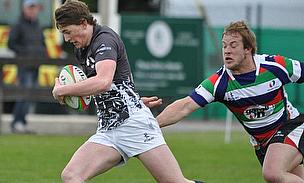 Simon Hammersley escapes from the clutches of an opponent 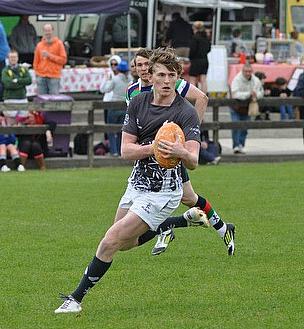 Simon Hammersely is an 'elegant and elusive' fullback

A Year Is A Long Time In Rugby...
Youth Rugby Out Reach - U20 Nations Cup
The Children are the Future

A YEAR is a long time in rugby . . . just ask student Simon Hammersley.

Twelve months ago he ended his fresher year at Durham downcast after defeat at Twickenham in the universities cup final.

This summer the 20-year-old economics undergraduate is an international, has a contract with a Premiership club and is just back from playing in Australia.

Oh and he’s also been back to Twickers to make amends.

“This past year has been a great journey for me,” confessed Simon as he enjoyed a bit of down time after an exhausting end-of-season schedule which also had a bit of sevens in Ireland thrown in.

“The past year with Durham was a highlight, getting the victory we didn’t get 12 months ago was an unbelievable feeling. But my personal high point had to be scoring my first try for England Students in the game against Wales.

“To cross the whitewash wearing that England shirt is a truly special experience.”

Simon, an elegant and elusive full-back, has burst into Newcastle Falcons’ Academy squad after shining with the all-conquering Durham side captained by Bill Beaumont’s youngest son Josh.

Falcons are clearly impressed by what they have seen and have handed him a contract to cover his final year at university and then a year of full-time rugby after that.

Making the step up is something the former Hull Ionians youngster is looking forward to after testing himself on the international stage against the senior Portugal side and leaving the field wanting more.

“A few more caps for England Students would be particularly nice next season,” he said. “But I’m doing some training with the Falcons over the summer and it would be great to get some more experience at the higher level, hopefully having a chance in the A-team if possible.

“I’ve signed a two-year contract, so we’ll have to see how that works out. But hopefully in that time I’ll be able to show the club what I can do.

“Getting the chance to play for my country was a great opportunity and I’d like to think I took my chance.

Playing against the senior Portugal side was a great experience. But scoring that try against Wales is something I’ll never ever forget. It was awesome.”

An unbeaten 12 months for university rugby’s double winners was capped off with a well deserved three-week end-of-season tour Down Under and the chance to watch the victorious Lions. The Durham lads saw three midweek games and the First Test in Brisbane. But they also got up even closer to the tourists with an impromptu forwards training session in New South Wales - something Simon confesses he ducked out of!

“We’d just beaten a strong Newcastle Barbarians side and we went down to the ground the following day where the majority of the Test forwards and a few injured backs were training,” he said.

“Graham Rowntree asked if a few of the boys wanted to get involved, holding the pads and helping out on the scrum machine. All the boys who went down there thoroughly enjoyed it and managed to get some good pictures with the team.

“I didn’t fancy holding the pads for some giants, even though they were the British and Irish Lions. So I decided to stay in the stand and watch!”

Simon is bound to be a key player for a new-look Durham University team next season after the departures of last season’s third years, including Beaumont Jnr who is now full-time with Sale Sharks.

Under the tutelage of head coach Alex Keay, a former Saracens’ skipper, the side have won every league game for the last three years, triumphed in the BUCS Cup Final twice, been runners-up once and been crowned sevens champions into the bargain. So trying to replace players of that quality and sustain Durham’s dominance over Simon’s final 12 months is going to be a tough ask.

“To lose the majority of our starting pack and the half backs as well is a huge blow, it would be for any team,” he said. “As well as being great rugby players, they’re also great guys, so it’ll be interesting to see how the dynamics of the club change both on and off the field.

“We had a very strong second team last season who managed to win their league even though they played against first teams week-in-week out. I think we’ve a lot of talent coming into the team next year, so hopefully we should be strong again.

“It’s been a great achievement for everyone who’s had a role in the success here at Durham. To go three years unbeaten in the league is unbelievable.

“Alex has brought a real structure to the club and has emphasised the importance of becoming a more professional outfit through team gym sessions and regular training. He’s also a top coach on the pitch and the critical insight from games that he brings into training is essential to the success of the club.

“He also encourages us to play as we see things and lets us have a lot of input into training and matches. He helps us play an expansive style of rugby where he wants all of us from 1 to 15 to be able to pass and give, and make decisions on the pitch.

“I’m looking forward to another busy year. If it’s as memorable as the last 12 months for me then I’ll be more than happy.”