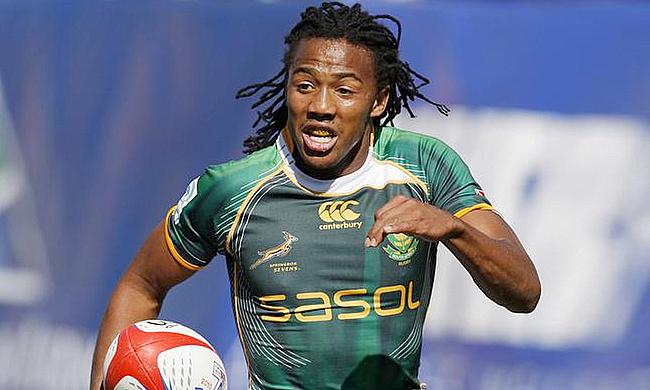 As Cecil Afrika announced his retirement from Rugby Sevens this week, it suddenly dawned on me that I will no longer get to see the slight dreadlocked assassin carving up witless defensive systems on the Sevens World Series.

Listening to an introverted Cecil Afrika speak provides the most stunning contrast to his abundance of talent, attacking fluency and expression on the rugby pitch.  Cecil Afrika played the game as it’s meant to be played – he made Rugby Sevens look like a mediocre game of  ‘touch-rugby’ in which defenders make the wrong decisions repeatedly, ad nauseum.

Afrika is what you’d call a pure ‘ball player’ – in the mould of Beauden Barrett, Quade Cooper, Joe Roff and Andrew Walker. Afrika keeps the ball in two hands, takes on defensive lines, passes both ways, offloads, dummies, kicks, he did it all – and he made it look ridiculously simple.  And for all his attacking talent, when it comes to defense, he’s as mean, physical and dominant as any 65 kilogram, 20 year old whipper-snapper you’re likely to find.

I remember the first time, I heard his name and saw him play – it was in a pub, watching the South Africa Under 20s in the World Cup. He was a slight figure, but one that left absolutely no doubt that he intended to be around for a while. It was fairly obvious from his youth that Afrika was quick, nippy and had beautiful feet - but it became more and more apparent in his role at 10 (flyhalf) that Cecil Afrika had the very rare gifts of vision and the supreme handling skills to execute.

The next stark memory of Cecil Afrika was only a beautiful afternoon in Port Elizabeth. The Blitzboks were competing against France when Cecil Afrika received the ball. He beat the defensive line with a simple step off his right foot, before turning the panicked French cover defender inside, outside and then inside before scoring under the sticks. Afrika did this often – he made defenders panic, become flustered, even behave irrationally at times.

My lasting remembrance of Cecil Afrika will be a collection of memories, a highlight reel of him often making professional players and opponents looks decidedly average. Afrika features in sidesteps that leave players on their knees - having gone the wrong way, outrageous and audacious dummies that could only hoodwink exceedingly gullible and overenthusiastic dogs, and finally the ball in two hands, attacking space before finding his support runner with a perfectly executed floating pass. Cecil Afrika was special.

It’s farewell to one of (if not) the most skillful and talented all round rugby players that South Africa has ever produced. I have very little doubt that Cecil Afrika will soon make an inevitable transition from attacking maestro to attacking guru. If ever there was a player destined to coach – it’d be Cecil Afrika.

I once heard a rumour that Cecil Afrika could join the Blitzboks coaching set up, but that’ll only be after he puts his feet up, digests and reflects on a magnificent rugby career.