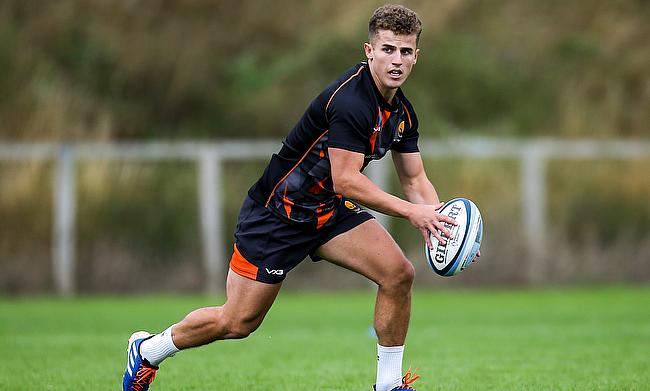 It was this time six years ago that Billy Searle was preparing for his first season of men’s rugby.

As an 18-year-old, Searle played a season with Launceston in National Two South before a solid campaign with Cornwall in the County Championship saw him picked up by Plymouth in National One.

Following a second stint with Cornwall, the Devon-born fly-half linked up with the Bristol Academy, breaking through to play a lot of his rugby behind Ireland international Ian Madigan. For the past two years, Searle has been at Wasps but has now moved down the M5 to play for a Worcester side looking to become a more dominant force in domestic rugby.

Locked in with the Warriors until at least 2023, Searle cuts the figure of a relaxed man in new surroundings. Director of Rugby, Alan Solomons, first came across Searle when he was a coaching consultant with Bristol and snapped up his former player to join the ongoing development of the West Midlands club.

“Most people these days go through the academy from a young age, but I never did that,” Searle said. “I was at Exeter College, but never really got a look in at Chiefs, but I played National Two rugby for a year and National One and got spotted that way.

“It was quite a cool way to do it and by the time I went to Bristol, I already had 40 league games in the National Leagues, which I think put me in good stead going into men’s rugby and I was used to those sorts of collisions and that sort of thing. It is just obviously a lot quicker and a higher demand at this level.”

Worcester, themselves, are huge advocates of sending their young players out to National League clubs. In the past, Josh Adams has been with Cinderford whilst new vice-captain Will Butler spent time with Birmingham Moseley in National One.

Their current crops of youngsters were also plying their trade in the NCA prior to Covid-19. Scrum-half Callum Morris and full-back Noah Heward had been lining up for Stourbridge, prop Lewis Holsey has been with Loughborough whilst Oli Morris and Morgan Monks were pulling on the red and black of Moseley.

Having played nearly 50 games in the National Leagues before becoming a fully professional player, Searle is perhaps naturally an advocate of sending young players to develop in the NCA. He believes that having been given the opportunity to play so much in his formative years is a big part of his success.

“I think that is the main reason, when I did go to Bristol, I got that opportunity and I took it and kicked on,” Searle said. I think sending boys to the National Leagues is awesome when they are 18, 19. It is completely different when you are playing junior rugby and against other academies.

“It is quick, but those collisions and the savviness of older heads who have been there and done it, puts you in good stead and I will recommend it to Worcester players to play as much as they can in the National Leagues growing up. It will put them in good stead.”

At the start of July, it was announced that the County Championship would be postponed until 2022. Due to the global pandemic and the financial constraints caused as a result, many are disappointed that they won’t get to see their county potentially lift a trophy at Twickenham for another two years. Attributing a lot of his successes to the competition, Searle understands why it is unable to take place until 2022 at the earliest.

“It is sad,” Searle said. “People do come through that way, but it is a good chance for young players who maybe haven’t been picked up by academies to get spotted. In my opinion, they should try and get it on as much as possible and that is where I got seen to go and play for Plymouth Albion and that’s where I got spotted to play at Bristol.

“Without the County Championship, I might not be here now. For me, I would be really keen to keep that going, but obviously it is above me, for financial reasons and hopefully they can get it back on as soon as possible.”

Worcester will be returning to play on the 15th of August when they take on Gloucester at Sixways.