Winning starts put to the test as the Tigers host Caldy 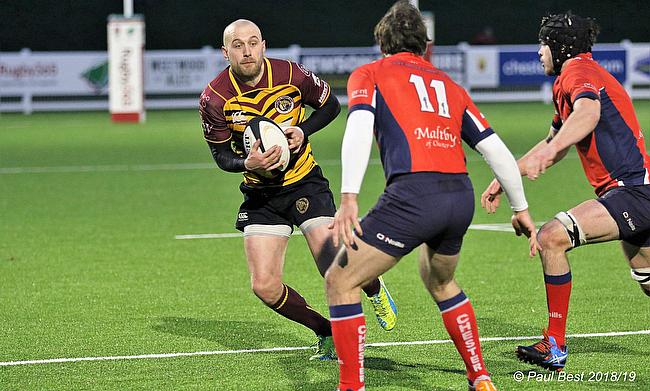 Four teams in National Two North have won both of their opening fixtures and two of those clubs meet this weekend when Caldy visit Sheffield Tigers.

After suffering relegation from National One, Caldy might have been expected to begin the season strongly and they have duly delivered with back to back victories whilst the Tigers are the surprise package so far, especially following their opening day win over Chester.

League leaders Stourbridge are the only club in the division who have picked up all 10 points and they face an unbeaten Hull outfit in Round Three. Sedgley Park, who also have two wins to their name, travel to Huddersfield this weekend.

Elsewhere, Fylde go to Wharfedale aiming to maintain their solid start to the campaign and Loughborough Students visit a winless Chester at Hare Lane. Also in Round Three, Hinckley will be gunning for their first victory of the season against Luctonians while Otley take on Tynedale and Preston Grasshoppers entertain Scunthorpe.

Neil Mitchell and his Stourbridge side have made an extremely positive start to the new National Two North season. Their opening two matches have yielded back-to-back bonus point wins against Loughborough Students and newly-promoted Luctonians meaning Stour are now the only team in the division with maximum points to their name.

Hull RUFC's Mike Jobling believes a 'tight-knit' environment at the club has been key to their impressive return to #Nat2n. Next up, league leaders Stourbridge...

Like Luctonians, Hull are a fresh addition to National Two North this season but they may present a different and perhaps awkward challenge for the hosts on Saturday. Gary Pearce’s men are unbeaten after two rounds as a draw at Huddersfield was followed by a terrific win against Tynedale in their first home game of the season. The Yorkshire club have begun life back in the fourth tier superbly and they will not shy away from the challenge of facing the early league leaders this weekend.

Last week’s 18-10 victory over Chester maintained Caldy’s perfect beginning to the National Two North season after relegation last term. The Wirral side will be aiming for an immediate return to National One and a strong September would be ideal if they are mounting a promotion bid.

This weekend, Caldy take the trip to Sheffield Tigers and after spending most of last season in the bottom half of the division, Jamie Broadley’s men have made a brilliant start to the 2018/19 campaign. The Tigers stunned Chester in Round One and a dramatic victory over Scunthorpe last weekend means they are only one of four teams yet to taste defeat thus far. If the home side can maintain that winning feeling against Caldy, it would certainly enhance their impressive beginning to the season.

After two matches, Sedgley Park find themselves with back-to- back victories to their name. Scott Barrow’s tenure at Park Lane has started impressively with wins against Preston Grasshoppers and Wharfedale, but it is another tricky test for Sedge this weekend when they take on Huddersfield.

Gareth Lewis’ side have drawn both of their matches this season against Hull and Otley so they will be desperately seeking a first win of the new season on Saturday. Sedge won this corresponding fixture 29-24 last term so can Huddersfield exact their revenge back at Lockwood Park?

Fylde would have hoped to head into Round Three with two wins under their belt and at one stage last week, Warren Spragg’s side were on course to maintain their victorious start. However in their Lancashire derby, Preston Grasshoppers were able to fightback to earn a draw but nevertheless, Fylde remain unbeaten as they travel to Wharfedale this weekend.

Dale narrowly lost to Sedgley Park last Saturday following an opening day home win over Otley so the Greens will want to maintain they impressive form at the Avenue. In fact, they have won 11 of their last 16 matches on their own turf so the Yorkshire outfit will be hoping to capitalise on home advantage, just like they did against Fylde in a 14-13 win last season.

Following their disappointing opening day defeat to Stourbridge, Loughborough Students bounced back in style as they put Hinckley to the sword in Round Two. It was a performance which the Midlands club needed if they do harbour hopes of returning to National One at the first attempt and if they could go to Chester and secure a win in Round Three, that would only boost their credentials.

The Students may well be visiting Hare Lane at just the right time as Chester have lost both of their matches this season. Last year’s runners-up were beaten by Caldy last Sunday so Jan Van Deventer and his side will be quite keen to avoid a hat-trick of defeats this weekend.

Luctonians enjoyed an impressive reintroduction to the fourth tier, but after their opening weekend victory over Tynedale, Ryan Watkins’ side felt the full force of National Two North last Saturday. Stourbridge, in the end, had too much for the Lucts but back at Mortimer Park, they will be confident of responding with a positive result.

Hinckley make the trip to Herefordshire in Round Three still seeking their first win of the term. A difficult Round One test against Caldy ended in defeat, but the Hornets were unable to get going against Loughborough Students last week as they fell to a 41-7 loss. Hinckley managed just three wins on the road last season and in week three of this campaign, the Midlands club will be hoping their fortunes can be quickly turned around.

The current situation for Tynedale and Otley is both clubs are without a victory so far this term, but the likelihood is that this will change in Round Three when the sides meet at Corbridge. For Otley, a narrow loss to Wharfedale was followed by a draw in their first home match of the campaign against Huddersfield so the Yorkshire club will be keen to spark their season into life this weekend.

Yet another Gallagher Premiership player talking positively about the National Leagues!

Joe Harvey sat down with Wasps' Rob Miller to reflect on his time with Tynedale, rugby in the North-East and the new season. #Nat1 #Nat2nhttps://t.co/uQPZbCWi6Q pic.twitter.com/AB2JMri0mZ

Tyne are level on points with Otley despite losing both of their opening two fixtures. Back to back defeats against newly promoted Luctonians and Hull is not the start Ben Woods and his side would have envisaged so the North-East club will be itching to put those two disappointing results behind them this weekend.

Preston Grasshoppers are still without a win following their opening two matches, but they have faced two teams that finished above them last season. A defeat to Sedgley Park was followed by a spirited fightback against local rivals Fylde as Paul Arnold’s man claimed a share of the spoils last weekend.

The Lancashire club may fancy their chances of securing their first victory of the campaign in Round Three when they take on newcomers Scunthorpe at Lightfoot Green. Tim Robinson’s men were minutes away from sealing a first win at this level since April 2017, but it was snatched away from them by Sheffield Tigers in Round Two. That aforementioned victory for the Greens did actually come on the road against Luctonians over two years ago so can Scunthorpe triumph on their travels to kick start their return to National Two North?