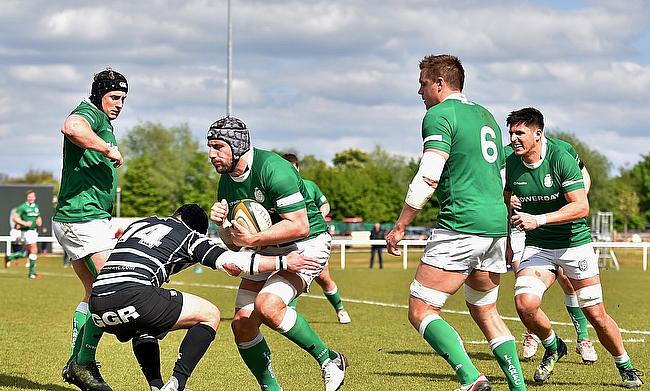 London Irish Wild Geese put in a superb display to condemn Taunton Titans to their second loss in a row in National Two South.

The Titans had won their first nine games of the campaign and were sitting at the top of the division heading into November, but successive defeats this month leaves them six points behind league leaders Chinnor.

The table toppers thrashed bottom club Wimbledon in Round 11 to stay at the summit and Cinderford remain hot on the heels of Chinnor after their battling win at home to Barnstaple. Meanwhile, fourth placed Redingensians made it six wins in a row as they saw off Redruth while Henley Hawks edged past Bury St Edmunds.

Following London Irish Wild Geese’s excellent performance, there were also wins for teams around them in the bottom half of the division as Worthing Raiders, Tonbridge Juddians and Clifton secured home victories.

A hat-trick from Kieran Goss helped Chinnor secure their 10th victory in a row as they ran in 10 tries to beat Wimbledon at Kingsey Park.

Harry Tab, James Gillespie and Josh Charles all went over for Wimbledon but for the most part, they were outclassed.

Goss completed his hat-trick in the second period and scrum-half Mike McDonald also grabbed a brace while Henry Lamont and Rhys Lawrence wrapped up a convincing win for the league leaders.

Cinderford remain two points behind Chinnor as they battled to a hard-fought victory over Barnstaple at Dockham Road.

Barum, who were just edged out by the league leaders last week, had led 19-17 thanks to scores from Will Topps and Luke Berry as well as a penalty try.

But Cinderford, who were 10-points ahead at the break, hit back as a penalty try and a score from Liam Hemming were added to by Tim Brockett and Harry Horne as the hosts sealed the win.

London Irish Wild Geese inflicted a second defeat in a row on Taunton Titans in an amazing 13-try match at Hazlewood,

The Somerset side, who had their 100 per cent start to the season ended by Henley Hawks last weekend, started slowly in this contest and it ultimately cost them.

The game did end with Harry Rowland being sent-off for Wild Geese, but a superb display from Lee Starling’s men had already clinched a brilliant win.

Redingensians are only four points behind Taunton Titans as they beat Redruth to secure their sixth victory in a row.

A score from Connor Corrigan and two penalty tries either side of half-time helped Redingensians open up a 21-point lead.

Redruth then started to enjoy some pressure and were rewarded when Shaun Buzza drove over and AJ Cant dotted down on the hour.

However, the Reds could not muster up anymore clear cut chances as the home side saw out yet another win.

Henley Hawks built on their win against Taunton Titans last weekend with victory over Bury St Edmunds at Dry Leas.

Henley’s Jack Albon crashed over and Jack Robinson added a second try to make it 17-14 to the hosts at half-time, with Harry Anderson-Brown and Sam Bixby dotting down for Bury

Bury’s Fraser Honey landed two superb penalties after the break to nudge Ollie Smith’s men in front, but a try from Dave Hyde and a penalty from George Jackson won it for Henley.

Clifton ended a run of three straight defeats as five penalties from the boot of Brad Barnes guided them to victory against Canterbury.

The Lavender and Blacks held an 11-10 lead at the break as Barnes kicked two goals to add to Ian Clark’s try, while Harry Sayers and Alex Miller crossed for the City Men.

But after the break, Clifton controlled territory and possession which allowed Hamish Renwick to smash his way over to put Darren Lloyd’s side further ahead.

Barnes’ three penalties steered Clifton home and despite Canterbury’s Jamie Stephens touching down late on, the visitors could not clinch a losing bonus-point.

Tonbridge Juddians sealed their second win of the month after they held off Old Redingensians at the Slade.

Old Reds only trailed by two points as the game approached the closing stage, but Hugo Watson’s second score clinched the victory for TJs.

Dave Irvine, Murray Galbraith-Lowe and Duncan Tout scored Tonbridge’s three other tries while despite another positive showing by the visitors, they failed to claim a bonus-point.

Worthing Raiders secured back to back home wins with victory over Broadstreet at Roundstone Lane.

Jack Lake’s score after only four minutes had put Raiders ahead and a brace from Sam Hampson gave the hosts a 22-7 half-time advantage.

Jack Maslan’s effort plus scores from Jack Forrest and Will Grief confirmed Worthing’s superiority with Chris Idehen and Nicholas Thatcher crossing in either half for Broadstreet.