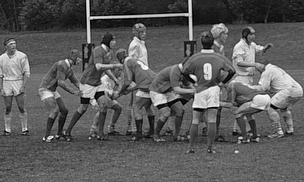 With the 2013 Autumn Internationals now less than two weeks away, and the Southern Hemisphere’s greatest rugby nations congregating in the North, Talking Rugby Union thought it would be a good opportunity to highlight the brilliance of Northern Hemisphere rugby through the Six Nations’ top ten moments…

In what was an impressive grand slam in the 5 nations for England, the final game in which they beat France was overshadowed by arguably the greatest try that Twickenham has ever seen. A missed penalty kick by England fullback Hodkinson saw Blanco gather the ball and counter attack up the right wing and pass to Fly half Camberabero who then chipped and gathered the ball before kicking the ball through for St Andre to collect and score.

This year’s Six Nations competition makes the list, as rugby fans witnessed a monumental result that shocked many pundits and fans. Italy’s victory over France during the opening weekend of the tournament really shook Les Blues; this was a game that they would have fully expected to win. To somebody who was watching rugby for the first time, they would never have thought that the pedigree and form in that match laid with the French. Inspirational performances from Captain Sergio Parisse, Castrogiovanni and Orquera saw the Italians run in shock 23-18 winners.

This was the beginning of a special era for Welsh Rugby.  First up for Wales was an English team high on confidence. The England squad featured an 18 year old debutant in Matthew Tait who lined up against an in form Gavin Henson. This game will forever be remembered for Gavin Henson’s man of the match performance and a long distance kick that sealed the win 11-9. Wales marched on to an emphatic grand slam that year, it what some called a golden era for Welsh Rugby. There was quality throughout the team from 1-15.

Nobody would have knew that England’s world cup victory was just around the corner, but at the time, the English eyes were set on one thing, and that was a grand slam against Ireland in Dublin. There was something intense about the England team that day, the look on Martin Johnsons face and the way he refused to move to the other side of the carpet. He did this to aggravate the Irish and it seemed to work. England ran out comfortable winners that day, the final score was 42-6.

Wales field an emergency prop on the wing (1903)

In 1903 a Wales team that were ravaged by injuries were forced to play prop Jehoida Hodges as an emergency wing against England. The front rower famously helped himself to three tries in 21-5 victory for Wales. During the first decade of the 1900s Wales won the title on five occasions.

Led by world class players such as Gareth Edwards and Barry John, the great Welsh side of the 1970s secured their first grand slam since 1952 in an extraordinary game that saw the lead change hands on five occasions. A landmark moment in this game was an outstanding try by fly half Barry John, but with Scotland four points ahead with just ten minutes to play, the title came down to a high pressure conversion from John Taylor following Gerald Davies’ try. John Taylor held his nerve, slotting it over to end a 23 year wait.

An inspirational performance from Bill Beaumont and his team saw England end their 23 year drought with a 30-18 win over Scotland at Murrayfield, to clinch the grand slam. After the game Beaumont was chaired off the field to spark a crazy night of English celebrations in Edinburgh.

The final day of the last ever five nation’s tournament saw Wales face a strong England side at Wembley as the Millennium Stadium had not yet been completed. England were closing in on the title and a grand slam, but with seconds remaining Scott Gibbs takes the ball from a lineout move just outside England’s 22 and gallops through tacklers to send the Welsh fans into raptures. It then came down to a Neil Jenkins conversion which he slotted with ease.  Scotland were handed the last ever five nations on a plate.

Ireland travelled to Paris as massive underdogs. Little did anybody know Ireland had a rugby legend amongst their ranks. Brian O’Driscoll inspired the Irish to their first win in France for 28 years with a scintillating hat-trick. Following Ireland’s 27-25 win in Paris, O’Driscoll was immediately tipped to become Ireland’s next best thing, hooker Keith Wood said: “I would like to say Brian should keep his feet on the ground but he shouldn’t. This is not the time for that. He deserves to enjoy himself, it’s a special day and he was brilliant”

The Five Nations became six when Italy stunned Scotland in their first ever championship game with a famous 34-20 win at Stadio Flaminio, inspired by the experienced and accurate boot of Diego Dominguez who scored 29 of Italy’s points. Under the guidance of New Zealander Brad Johnstone the Azzuri lost their next four games to finish sixth with England taking the title.

The Autumn International Series begin on the 2nd of November when Australia head to Twickenham.

Who is your money on to dominate in this year’s Autumn Internationals?

Will England be able to recreate the monumental heroics of last season when they dispatched the World Champion All Blacks 38-21 with an incredible, record breaking win?

Although we can only speculate on who will emerge victorious from the internationals, one thing is set in stone - there will be some great rugby on display, as the world’s best teams battle it out in the Northern Hemisphere.