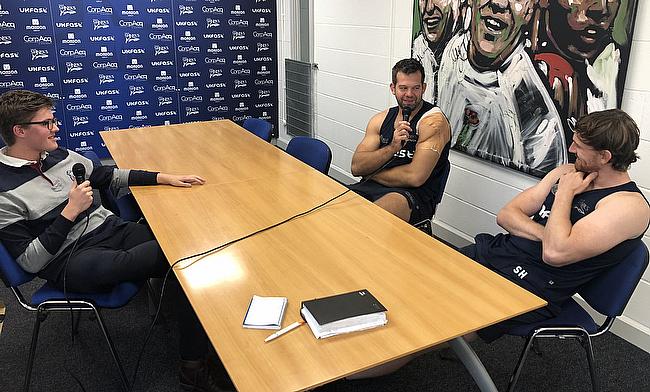 Joe Harvey and Chris Heal were on the road as they visited Sale Sharks!

Below is a full transcript of Joe's conversation with Josh and Simon, who are regular columnists for Talking Rugby Union whilst you can listen to the full podcast by clicking on the AudioBoom link at the bottom of the article!

Josh Beaumont: Yeah, it’s always our favourite time of the year I think, especially in the long run. Yeah, it’s been good, a few new faces in at Sale, exciting times. I think we’re at a stage now where we’re probably ready for the start of the season to come, obviously it’s a long old slog this preseason, with the World Cup, but I think we’re looking forward to getting into a bit of rugby now.

JB: Yeah, we’ve got four weeks of the Premiership Cup, so I suppose it’s quite nice to get a bit of game time, a bit more competitive game time before the season starts, so hopefully we’ll be going all guns blazing into the Premiership.

Simon Hammersley: Yeah, it’s good. Obviously it’s a shame how things went with Newcastle at the end of last season, but this opportunity presented itself and Beau sort of sold it to me and it’s been great to get stuck in, move to Manchester and get going with preseason.

JH: You both played a game together at the end of last season against the Barbarians for the England XV, how was that experience for both of you guys, more as a developmental thing than anything else?

SH: Josh has obviously done it a couple of times, for me it was my first time. It was great to be around the squad. I got flown out to the Saxons, quite a few years ago now, so it was my first time back in the environment and it was great. It was really nice, great group of guys and not too intense, but still with the England feel to it and then we obviously put in a good performance in the end, so it was a good week.

JH: Of course, you both know each other because of the Durham University connection, like we said, that was kind of what helped you both step up this next level. We’ve talked about it with Josh before on the podcast and Josh is glowing about university rugby, still very much in contact with Alex Keay and everybody up there, Simon, how helpful was it for you getting to Falcons and the Premiership:

SH: Yeah, Keasy was actually up on Tuesday to see Josh, and then I popped in as well, but for me, I went to uni with no way of being a professional rugby player. I went to study for my degree and then it just happened that we had a really good team in my first year, Newcastle watched a few games and then we did really well in the second year, winning BUCS and they then approached me saying, do you want to come part-time in your last year at university and full-time the year after. To be honest, without university rugby literally wouldn’t be a professional player, so I owe a lot to Keasy and all the Durham guys.

JH: Any stand-out memories from your time at Durham together?

JB: Well, obviously that second year, winning BUCS, going unbeaten that year. I’d say your first year, my second year, we probably had the best team in my three years there, but we got hammered by Hartpury in the final, so coming back the year after and winning at Twickenham was a pretty special year. As I said, we had a good group of players for two to three years up there and it was fun playing rugby, and winning a lot which helped. So, my last year and Hammer’s second year. Good memories.

JH: We’ll look ahead to the new season, a lot of new faces at Carrington this year, are you quite excited to meet up with, well I’m assuming a lot are here actually?

JB: Well, the majority are here now I think. I think you’ve not met a couple of the lads who are away, Faf and we’ve still got Lood to come in, all the Du Preez’s have come now and obviously Coop’s and Hammers. There’s always new faces at the start of the year, but I’d say the quality that we’ve brought in this year makes it even more exciting, so looking forward to getting out there and playing with these guys.

JH: Champions Cup Rugby next season, after a little bit of a wait following that game against Gloucester and waiting for La Rochelle’s results.

JB: Yeah that was big for us because initially we thought we’d qualified straight after the game against Gloucester and then found out we hadn’t quite made it, so at the end of the year it kind of felt a bit flat because we didn’t achieve that top six and didn’t achieve qualification. But obviously the way things worked out, it was pleasing. We want to be out in the big competition, in the big games and it’s a good chance for a lot of players to shine on that big stage, so looking forward to it.

JH: Well, thank you very much for your time today guys, wish you all the best for the new season.

Don't forget to keep tabs across all of our social media channels, as well as our website, as we continue our build-up to an exicitng year of rugby.

So, take a listen to our Sale Sharks special podcast below!