Despite having games in hand and being second placed in National 2 North Sedgley Park Tigers have had a torrid three weeks with games against Caldy, Stourbridge and this weekend Otley. Saturday’s game finished 27-26 to the Tigers.

After 63 minutes of their game against a well drilled Otley, the home team supporters were using stronger words than torrid. The score line was 8-26 and the Tigers had missed four cast iron tries with poor passing and handling; a home defeat was on the cards.

In truth the Tigers had started brightly but as the per the previous week, the start did not deliver points and it was Otley that did just that. Matt Riley scored an early penalty for the Tigers; 3-0. Then it was all Otley; they dominated the breakdown and the scrum. This excellent work by the Otley forwards allowed their back three to inject real pace and it was James Wood who crossed for Otley’s first try; the reliable Depledge slotting the conversion; 3-8 after 10 minutes. 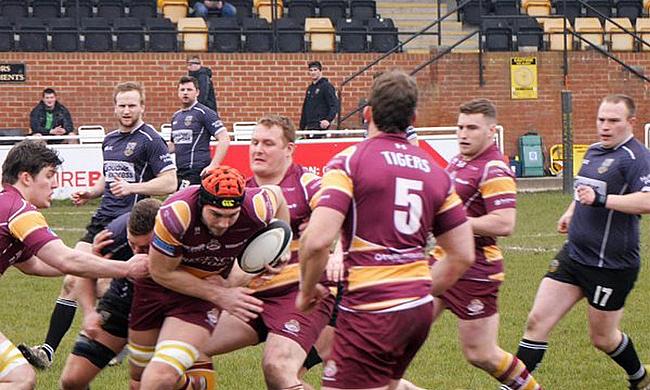 The heavyweight Tigers pack stuck to their task but Otley’s back row were able to slow each breakdown allowing the Otley defensive line to regroup and repel any Tigers incursions. With continuous slow ball the Tigers backs became anxious and their precise passing deserted them.

More poor breakdown work by the Tigers saw Otley use an effective kicking game to pin the home team back; another intelligent kick by Otley and put Tigers on the back foot. The Otley pack getting the procession and it was back row forward Jack Scott-Paul that went over for the Otley try. The score was 3-13 after 13 minutes.

The Tigers continued to battle but the slow ball at the breakdown and the dominance of the Otley scrum contained the battle to the centre of the park; hard fought but not pretty. Tigers got ball wide to Jamie Harrison who made ground down the left. As the ball was recycled, the quite excellent Rob Holloway found Greville who released the ball quickly for Jack Warrington to touch down; 8-12 after 33 minutes. That remained the scoreline at half-time. The away team looked in the ascendancy with good forward play and pace from their backs.

The second half continued with Otley’s forward dominance and the ability to slow ball down. Having lost their 10 to injury, it was Holloway that was attempting to put urgency into the Tigers game and he was to continue in that vain for the rest of the half.

Despite his efforts, it was Otley who were in control. On the 50-minute mark Otley mounted a sustained attack during which the Tigers lost their captain to a leg injury. The pressure Otley were able to exert was compelling. A strong line from Otley and Matt Heaton burst through to put the ball down for a converted try; 8-19 after 50 minutes.

Coach Schofield emptied his bench on the 61st minute mark and this injected pace in the Tigers forwards with Smith figuring across the park. The Tigers suddenly had a wider game; this caused the game to open up; the home fans sensed a fight back. That was not what Otley thought and they  injected their own pace and the ball went out wide to Henry Roberts and he was under the posts for a converted try; 8-26.

The home fans started to leave the grandstand, loud murmurs about the try scoring chances they had missed. Otley looked strong in the forwards with the introduction of Capps on the tight head, adding to their breakdown menace. The Tigers maintained a belief in keeping width and were stretching the Otley defence.

Tigers replacement props Dewland and Ashcroft were in the thick of the action showing pace and good hands to maintain the Tigers attacks. A yellow card for the Otley wing allowed the Tigers to add more width and suddenly they were getting quick ball and with that Holloway was linking with centres Bedlow and Riley. This newly found pace resulted in Riley going over for a converted try on 74 minutes to make it 15-26

The Otley restart allowed the Tigers to put an attack in motion ad a sweeping move with Dewland leading the play saw more quick ball and it was out wide again, in front of the grandstand. The Tigers were seemingly roaring back but surely there was not enough time; it was the 76th minute and Matt Lamprey broke the Otley line for a converted try; 22-26

Game over? Not quite. Fresh legs were continuing to add pace to the tiring Tigers; an attack was developing down the Tigers left; a smart chip ahead and it looked like a certain Tigers try but the Otley defence scrambled back: game over. The answer was not quite, the assistant was flagging and referee Smales consulted awarding a penalty and yellow card for pulling back.

No time to kick for the corner so Tigers’ Urmston and Lloyd took the penalty; quick recycling and the ball was sent wide for Lowthion to break through for a match-winning try. 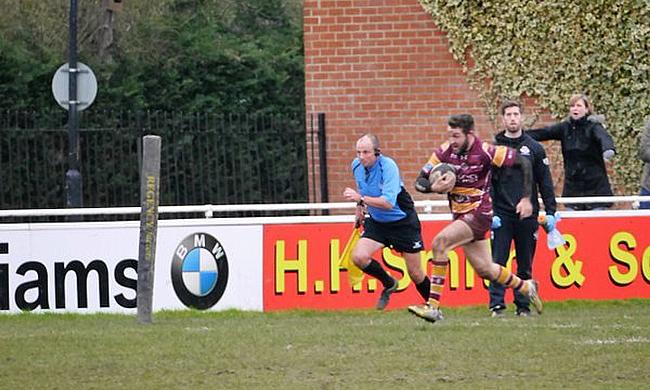 The run towards the winning try...
©Glenn Hutton 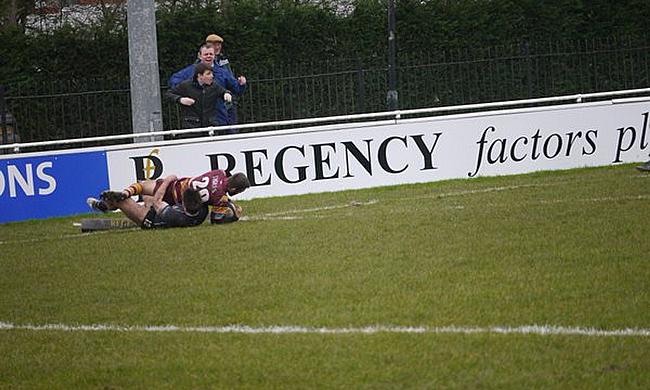 ...and the touchdown
©Glenn Hutton

The Tigers took the game, a game that they should never have been so far behind in, that for 60 minutes they played without pace. Otley were effective in the scrum, were able to slow the ball down and did not miss their chances. However, all season when the Tigers can clear our rucks, gain quick ball and add pace they are match winners.

Otley will be hurting after this game, Tigers will be thinking about what their plan A needs to be. The game’s man of the match was Rob Holloway; stepping up from full-back to fly-half and being pivotal in the comeback. The referee, Hamish Smales had a strong game and he looks a certainty for fast tracking.