Schalk Brits - What a player! 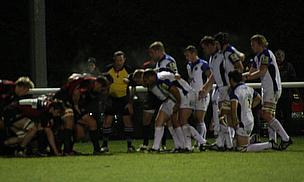 Brits started his career at Western Province in 2002, moving on to play Super Rugby for the Stormers in 2006. During his four seasons with the Cape Town based franchise the South African made 51 appearances before his move to Saracens in 2009.

It was while with the Stormers that Brits gained international honours, making his international debut against Italy in 2008. Unfortunately for the dynamic hooker he would only go on to achieve a further two caps before his move to England positioned himself in the international wilderness.

Since his arrival from the Stormers Schalk Brits has taken the Premiership by storm, in just his first season he was voted as the Players' Player of the year for the 2009/10 season.

Brits' omission from international consideration has however not deterred many commentators from calling for his return to the South Africa squad, causing anger from fans and rugby pundits alike.

Possessing the ball skills of a back, the pace of the quickest of back-rowers along with the strength of a front row forward Brits is considered to be one of the most dynamic and exciting players in the world.

Upon his arrival to England Brits wasted no time in making his impact, scoring his first try in Saracens 19-16 defeat of Gloucester at the back end of September. Brits went onto score six more tries in the 2009/10 campaign, playing every minute in the Premiership final defeat to Leicester Tigers that year.

The South African did however gain revenge this year, his performance in the London clubs Premiership final triumph earning him the man of the match award.

Even given Brits' outstanding performances in the past two seasons since his move from Super Rugby he still finds himself out of contention for the World Cup in New Zealand this autumn, Springbok coach Peter de Villiers omitting the hooker. Brits finds himself as one of three European-based players who, given their form in their own domestic competitions, are glaring absentees “ Brian Mujati of Northampton (political reasons preventing his selection) and Joe Van Niekirk of Toulon the others.

Many cite the diluted nature of the contact area in the Premiership as a reason for Brits' success; however it must be said an improvement has been seen in the hooker's tight forward play.

One thing that is for sure, Schalk Brits on his own is a match-winner, not many front-row forwards can have the impact over 80 minutes of rugby union that Brits achieves. This is probably summed up best in Leicester scrum half Ben Youngs' post match comments following the hooker's man of the match performance in May: "Schalk Brits was just phenomenal, a man possessed. If anything, he was probably the difference between the two sides. 

Springboks coach Peter de Villiers, who is considered a mad-man in some quarters as a result of his selection policy, sees Brits in a different light to others it would appear, considering him a sixth choice for the Boks number two shirt.

Realistically of the five that de Villiers has listed ahead of Brits “ Captain John Smit, Bismarck du Plessis, Bhilliboy Ralepelle, Adriaan Strauss and Bandise Maku “ only du Plessis can lay claim to being of the same class as the Saracens talisman, who would play the perfect foil to the Sharks' hooker coming off the bench in New Zealand.

Brits, does however have the opportunity to show Peter de Villiers exactly what he may be missing if he does not perform a u-turn before October. The Saracens hooker has secured a short term loan move to former club the Stormers and has been included in their line-up for the Super Rugby semi-final clash with the Crusaders, without playing a single regular season game.

Should selection to the South African travelling party Down Under not come to fruition, the Springboks' and rugby world's loss will be the Premiership and Saracen's gain as they look to defend their title of Premiership champions with the absence of many key internationals from their squad set to hit them hard. With this in mind Brits can continue to be the game-changing, difference maker for his side as they mount a challenge upon not only domestic rugby but the Heineken Cup too.