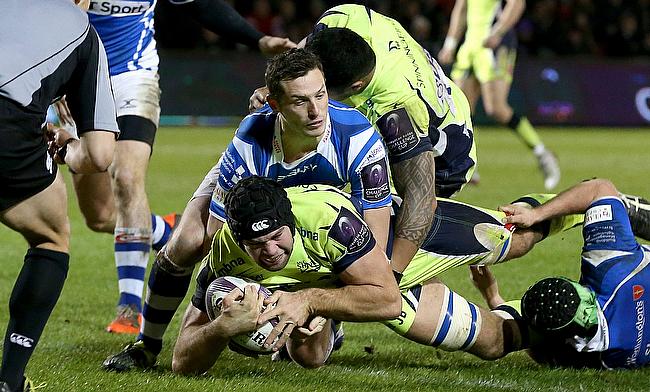 Sale mercilessly ripped top spot in Pool 2 and a home quarter-final in the European Challenge Cup away from Newport Gwent Dragons with a 38-5 bonus-point victory over the Welsh region at AJ Bell Stadium.

The Sharks had the victory all but sewn up inside the opening 20 minutes when, after Newport had lost Wales wing Hallam Amos to the sin-bin, they raced into a 17-0 lead through a Brian Mujati score and a penalty try.

England hopeful and Sharks captain Josh Beaumont added a third try on the stroke of half-time as Sale went in the interval 24-0 up before Nev Edwards collected the bonus-point fourth try seven minutes into the second half.

Newport got on the board themselves through Ashton Hewitt's try on the hour but Sale had the final word when Mike Haley cruised over for his side's fifth try.

Sale, who came into the match two points behind already-qualified leaders Newport, bossed possession early on but it was not until the Dragons saw Amos yellow-carded in the 10th minute that the home side finally made their dominance count on the scoreboard.

Danny Cipriani got things rolling when he slotted over the penalty from Amos' indiscretion and three minutes later prop Mujati charged over in the corner following a four-on-one overlap.

Sale increased their lead when a powerful scrum push led to the awarding of a penalty try, and with Cirpiani converting both scores the Sharks were all but out of sight.

Newport spurned a chance to get something back when Jason Tovey knocked on, but Sale could easily have had three more tries before the interval themselves with Haley and Andrei Ostrikov both being held up after crossing the line while Taulupe Faletau stripped the ball from Sam James' grasp as he dived over.

As it was, Sale had to settle for just the one more first-half score, with the impressive Beaumont taking two defenders over the line with him.

Sale did not let up there either, and some brilliant work from Cipriani led to Edwards diving over on the far left touchline to secure the bonus point in the 47th minute.

Despite the difficulty of the conversion, Cipriani split the uprights to make it five kicks from five before the fly-half - who unlike Beaumont failed to make Eddie Jones' England Elite Player Squad for the RBS 6 Nations - made way soon after for Joe Ford.

Last season's semi-finalists Newport finally had something to celebrate when Hewitt finished off a well-worked move from halfway to make it 31-5, but Sale had not finished yet and Haley sealed a one-sided Sharks win with their fifth try late on. Ford added the extras.