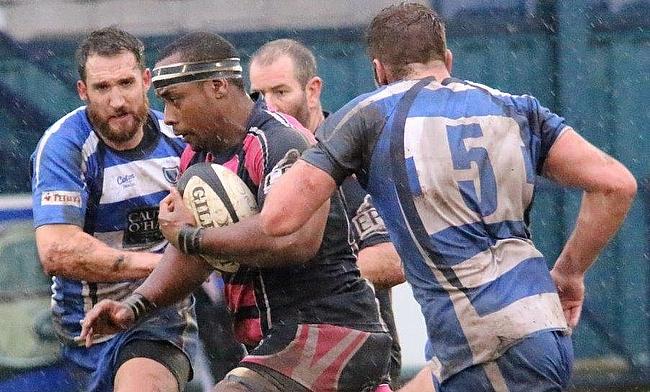 With just under two months left in the season, Sale FC are moving closer towards the National Two North title and this weekend, they face a huge examination when they host second place Stourbridge.

Currently, Sale are five points clear of Stour with a game in hand so a remarkable 16th win in a row would signify a huge step towards National One for Jonathan Keep’s side.

However, Stourbridge can claw Sale back if they become the first side to beat the Manchester-based club at Heywood Road this season which would also open up the promotion race once again.

With no fixtures taking place last weekend due to the “Beast from the East”, every team will be revitalised heading into Round 25 with the likes of Hinckley, Sedgley Park and Tynedale all aiming to continue their assault on the top two.

Meanwhile, Wharfedale and Blaydon face another crucial weekend in their battle to avoid the drop as do Luctonians who will be going in search of a welcome victory.

Sale FC Director of Rugby Jonathan Keep told us this week that his side cannot afford to look too far ahead of themselves as the league leaders edge towards promotion. As things stand, Sale are five points clear at the summit with a game in hand and also, they have won their last 15 matches. In their final eight games of the campaign, the table toppers have to play just one more of their promotion rivals and that fixture comes this weekend as second placed Stourbridge visit Heywood Road.

https://t.co/8J5GIR7Lem After hardly any action in the National Leagues last weekend, it returns with a bang this Saturday and in #Nat2n, there is an intriguing top of the table battle to look out for... pic.twitter.com/GVan0tglLZ

This clash is arguably Sale’s biggest hurdle between now and the end of the season, but Stourbridge Director of Rugby Neil Mitchell believes their hosts will be promoted as champions at the end of April. Mitchell told us that the Manchester-based club “were too far ahead” and Sale’s lead at the summit was increased during the last round of fixtures as Stour fell to a defeat. They were simply blown away by Tynedale in the second-half and after leading 29-17 at the break, the Midlands side conceded 35 unanswered points as they lost for the first time in five games. Mitchell admits it is now a four horse race for second spot and with Sale having lost just one of their last 27 league matches at home, Stour are relishing the challenge this weekend.

It has been three weeks since Hinckley were last in action, but during that time, they did have to watch the teams around them in the table all play some of their rearranged fixtures. The outcome for the Midlands side wasn’t too bad as they remain in third place and they are also just two points behind second placed Stourbridge after their defeat to Tynedale. George Chuter’s men still have a real chance of achieving a top two finish this season and with Stourbridge travelling to Sale this weekend, the Hornets could jump back into the top two with a win against Otley.

As for Otley, it has been a revealing couple of weeks for the Yorkshire side off the field. President David Somers said last month that Otley needs more volunteers if they are to survive as a club plus there is also talk about the future of their ground, Cross Green. However, on the field is what Otley will be focusing on this weekend and a mini revival of six wins from their last 10 matches has lifted Peter Clegg’s men away from the danger zone. Currently, Otley are five points clear of the relegation places so a fourth away victory of the campaign would keep them moving towards safety.

After Stourbridge had ended Sedgley’s Park unbeaten home record three weeks ago, Matt Bebbington’s side produced the perfect response in the final weekend of February as his team comfortably beat Leicester Lions to get their promotion bid back on track. Sedge’s defeat against Stour left the Manchester-based club playing catch-up, but the ball is once again in their court as the Tigers sit three points off the top two with a game in hand.

Tynedale’s win against Stourbridge last time out would have been appreciated by Sedge, but Bebbington’s men will need to keep their focus if they are to finish in a promotion place, beginning with this home fixture against Chester in Round 25. The visitors arrive at Park Lane in high spirits as they are currently on a run of four wins from their last five matches which has seen them move into the top six of National Two North. Following an incredibly patchy season, the men from Hare Lane are now going through their best spell of form at just the right time in the campaign as they look to end this term strongly. The gap between themselves and fifth placed Tynedale is 32 points and head coach Jan van Deventer knows six place is their aim between now and the season. Can the Cheshirecontinue their momentum this weekend?

This weekend, Tynedale will be eager to return to action in National Two North when they host Macclesfield at Tynedale Park. The North East side come into the fixture on the back of a wonderful second-half performance against Stourbridge which has boosted their bid to finish in the top two this season. A stunning turnaround at half-time secured a 52-29 victory for Tyne which means they are just six points off the play-off spot with two games in hand.

Scott Lawson’s men have been excellent at home recently - having won their last seven matches - and they will have to put in another strong display in front of their own supporters when Macclesfield visit this weekend. The Cheshire side have been revitalised under interim boss Marshall Gadd and Macc head into this weekend having won six of their last eight matches. A brace from Myles Hall helped the Blues to a home victory over Sheffield last time out and Macclesfield are now 11 points clear of the relegation zone with three games in hand. Can they produce another positive performance in Round 25?

South Leicester just can’t buy a win at the moment. Defeat at Blaydon two weeks ago was their seventh loss on the spin and a very positive season for the Midlands club is slowly fizzling out. Just one victory in 2018 has seen the men from Welford Road slip down to seventh in the table and they will be keen to stop this run of results as soon as possible if they are to finish in the top half of the division for the second year on the trot.

"The squad is looking more like what we had hoped for this year, so I’m pretty excited." Ryan talks to Ben... https://t.co/Uqmda0iHLJ

South are currently bottom of the form table so visitors Luctonians may use that to their advantage this weekend as they also look to turn their fortunes around. Head coach Ryan Watkins is confident that his side can pull off an escape from relegation because as things stand, the Lucts sit bottom of the division and nine points from safety. However, the men from Mortimer Park have a whole host of players returning from injury and with the Lucts also having three games in hand, this weekend could be the catalyst they need for survival.

In the last fixture they played, Huddersfield were on the wrong end of some clinical finishing against Sale FC as the ruthless league leaders brushed the Yorkshire outfit aside. Gareth Lewis’ men did have their fair share of chances in the first period, but they were made to rue them as they slipped to a fourth defeat in a row. Field have had a brilliant season following promotion from National Three Midlands, but the eighth placed side will be desperate to end this mini-blip as swiftly as possible.

They have the opportunity to do just that this weekend when they host Sheffield. Like every other team last Saturday, the men from Abbeydale Road were not in action following their postponed fixture against Tynedale so Adam Byron’s side travel to Huddersfield on the back of a defeat against Macclesfield. That 31-15 loss two weeks ago put a dent in their survival hopes as they are now six points off safety so just a second away win of the campaign on Saturday, would get their bid to stay in this division back on track.

Leicester Lions host Blaydon this weekend aiming to return to winning ways. Last time out, Andy Key’s men were beaten by Sedgley Park, but two wins from their last four games is a step in the right direction for the Midlands outfit. It has been a tough year for Leicester Lions after successive top three finishes so they will be hoping to complete this season as well as they possibly can, starting with a victory over Blaydon in Round 25.

But that is easier said than done as Blaydon arrive at TMDP with the bit between their teeth. It has been a massive few weeks for Matt Thompson’s men as back to back wins against Sheffield and South Leicester has left them on the cusp of safety. The Crows hadn’t secured successive victories since October prior to their triumph over South and now they have a real chance of avoiding the drop this term as they sit level on points with 13th placed Wharfedale. Blaydon blitzed past South at the end of last month and they will be aiming to continue their resurgence against the half of Leicester this weekend.

It is an all Yorkshire affair in National Two North this week as Sheffield Tigers host Wharfedale aiming to build upon their excellent victory over Luctonians from last time out. Jamie Broadley’s side may well have turned a corner after two wins from their last three matches and a third home win on the spin would keep the 10th placed side heading in the right direction.

As for Wharfedale, incoming Director of Rugby Rob Baldwin has targeted their home fixtures as the matches that could help them avoid relegation this season. Five of their last eight games are at the Avenue, but their focus is on Dore Moor this weekend as they continue to battle for survival. Dale had to watch on a couple of weeks ago as rivals Blaydon moved level on points with them, but this Saturday, they have the chance to continue their excellent recent form. The Greens have won five of their last seven matches which has lifted them out of the bottom three and if they are to stay there, they will need to keep on picking up positive results in the final two months of the campaign.