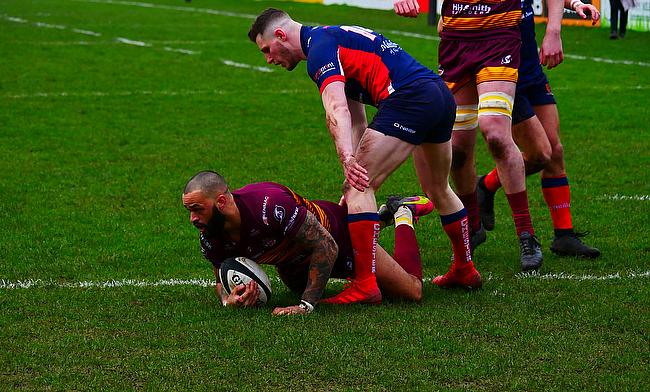 Sedgley Park, who beat Chester last weekend, are the only side in the league yet to face leaders Caldy
©Glenn Hutton

TJs deliver title statement and hope for Sutton & Epsom
Caldy in complete control and vital wins for Hull, Luctonians and Dale
Rams lose ground and Moseley distance themselves from danger
Can Moseley take their chance, a crucial Yorkshire derby and title ambitions on the line

We are eagerly anticipating this weekend in the National Leagues. It feels like we write the same thing every single Friday, but these divisions just keep on delivering.

Twists and turns in promotion races and relegation battles have been recurring themes since we entered 2020 and this weekend, we expect more of the same.

National One’s title contenders all face sides in the bottom half on Saturday with Richmond currently in the box seat. Steve Hill’s men are seven points clear at the top and they welcome struggling Rotherham Titans to the capital whilst second-placed Rosslyn Park go to Birmingham Moseley and Rams RFC entertain Bishop’s Stortford.

You can argue that the majority of drama and excitement will come in National Two in Round 22.

In the north, runaway leaders Caldy face their biggest test of the campaign when they take on top two hopefuls Sedgley Park whilst down towards the bottom, Hull and Luctonians collide in a hugely significant game.

In National Two South, the attention is once again on the promotion fight as table toppers Tonbridge Juddians travel to a red-hot Redruth side.

Below is a more in-depth look at this weekend’s action:

Richmond and Rotherham Titans head into this weekend in contrasting situations. For the London-based side, they sit seven points clear at the top of National One and with nine games remaining, Steve Hill’s men are looking good for an instant return to the third tier. It is the first time for a while that Richmond have had some breathing space at the summit of the division and their solid victory over Cinderford in Round 21 suggested the league leaders mean business.

As for Rotherham, the latest episode in their battle for survival sees them travel to the table toppers on Saturday and as things stand, they are 12 points from safety. The Titans were beaten 42-24 in a thrilling encounter with Chinnor last time out, but if Martin Jenkinson and Steve Salvin’s side can replicate the second half performance they displayed at Clifton Lane, they will certainly cause Richmond some problems in the capital. Over the next month, Rotherham play three sides in the bottom half so whilst their primary focus will be on Saturday, the Titans may well be targeting fixtures beyond this weekend.

Similarly to events at the Athletic Ground, stakes will be reasonably high at Billesley Common when Birmingham Moseley entertain Rosslyn Park. The visitors to the Midlands will be hoping a bumpy January is behind them, especially after their thumping 50-19 win over Cambridge last time out. Kieran Power’s side will realise they cannot afford anymore setbacks in their pursuit of top spot as a third successive loss on the road could all but end their title hopes for another year.

In terms of Birmingham Moseley, they gave their survival bid a significant boost in Round 21 as they came from behind to beat bottom of the table Canterbury. Adam Balding’s side now have a 12-point cushion between themselves and the bottom three and with rivals Rotherham taking on Richmond, a positive outcome against Rosslyn Park could prove to be crucial in their fight to avoid the drop.

Throughout the season, Rams RFC have declared that they are just enjoying every minute in National One. Seb Reynolds’ side were promoted into the third tier for the first time in the club’s history last term and the Berkshire club have been sensational during their maiden campaign at this level.

Due to their excellent run of results, the Rams have found themselves in an unexpected title race but their bid to potentially finish in top spot has taken a knock in recent weeks. Successive home losses has left them eight points adrift of Richmond but they have a chance to avoid a hat-trick of defeats at Old Bath Road when they host Bishop’s Stortford. The visitors on Saturday were pleased to secure a bonus-point win over Hull Ionians in Round 21 as it enabled them to move further away from any relegation fight. Andy Long’s side did actually beat Rams back in October so could they repeat that feat this weekend.

Elsewhere in National One, fourth-placed Chinnor entertain Old Elthamians and Blackheath, fresh from their win over Rams, take on Plymouth Albion. Meanwhile, Darlington Mowden Park could put another nail in Canterbury’s coffin when the side meet in the North-East, Cambridge host Sale FC and Cinderford travel to Hull Ionians.

Well, here we are. Since Caldy’s original meeting with Sedgley Park was postponed back in October, this month has been labelled as ‘crucial’ in National Two North circles when discussing the promotion race. Over the course of the next three weeks, the Wirral club are set to face Sedge either side of a visit to second-placed Fylde and if Caldy were to enter March unscathed, the title would be all but theirs.

Gareth Davies and Matt Cairns’ side have won all 20 of their fixtures this term and currently hold a 17-point lead at the summit of the division. In fact, Caldy have lost just two of their last 50 National Two North games but the only side to get the better of them over that period has been Sedgley Park. The Tigers did the double over Caldy in 2016/17 and victory at Paton Field on Saturday would keep them in the hunt for a top two finish. Fylde’s loss to Hinckley last week, combined with Sedge’s win over Chester, has left Scott Barrow’s side just four points off second place so could the men from Park Lane halt Caldy once again?

With a crucial game at the top of National Two North grabbing the headlines, this weekend could also be pivotal in the fight for survival. In recent weeks, the resurgence of both Hull and Luctonians has blown the relegation battle wide open, with both clubs beginning this weekend outside the bottom three.

Hull have recorded seven wins from their last 10 fixtures and now sit six points clear of the drop zone. Gary Pearce’s side have performed superbly over the last few months to secure wins against the likes of Fylde, Tynedale and Loughborough Students and the Lucs can also boast an identical run form. Ryan Watkins’s men head into this weekend in a confident mood especially have recent victories over Chester, Loughborough and Sheffield Tigers and with the Herefordshire outfit five points above the trapdoor, the winner of this clash at Mortimer Park would take a huge step towards survival.

Whilst teams towards the bottom of the division have been able to turn their fortunes around, it has had a detrimental effect on Otley’s season. In the same period as the likes of Hull and Luctonians have enjoyed their respective purple patches, Charlie Maunder’s men have picked up just three victories and now they find themselves in the drop zone.

The Yorkshire club are two points adrift of safety as they prepare to visit Loughborough Students, but Otley may take a leaf out of their rivals’ book if they are to get a result in the Midlands. Both Hull and Luctonians have beaten the Students this term and Rhys Edwards’ side have tailed off in recent weeks. Just one win from their last four matches means Loughborough have fallen away from the race for a top two finish and now they will be keen to conclude their return to National Two North in a positive manner.

Also in National Two North this weekend, second-placed Fylde will be keeping close tabs on event at Caldy when they travel to Chester whilst an in-form Hinckley take on bottom of the table Scunthorpe. Elsewhere, Stourbridge host relegation threatened Preston Grasshoppers, Tynedale face Wharfedale and Sheffield Tigers entertain Huddersfield.

Tonbridge Juddians and Redruth are both attempting to gain promotion from National Two South – and the former currently sit at the top of the pile. Peter Dankert’s charges secured a superb result against title rivals Henley Hawks last time out and now TJs hold a four-point lead at the summit.

If the men from Kent were to get past Redruth this weekend, it would be a significant step towards a place in National One but the Cornwall-based outfit have been on fire ever since their last meeting with Tonbridge Juddians back in October. Nigel Hambly’s side have won 12 of their last 13 games and now the Reds are firmly in the race for a top two finish. Redruth are only three points behind second-placed Henley and having defeated the Hawks at the end of January, they are more than capable of doing the same against another promotion contender.

Taunton Titans, along with Tonbridge Juddians and Redruth, are another side in the fight for a top two spot and Tony Yapp’s side have really enhanced their credentials over the last three weeks. Defeat to Henley Hawks did put a dent in their promotion aspirations, but a trio of recent victories means the Somerset club are only behind because they have drawn less games than Henley Hawks.

The Titans could actually be at the summit of National Two South on Saturday morning if they can achieve a bonus-point win over Clifton in the first game of Round 22 on Friday night. The Lavender and Blacks head into this clash on the back of three straight wins against the division’s basement clubs, which was the ideal tonic for Matt Salter’s side after beginning the New Year with successive losses. This is the second time Clifton have met Taunton on a Friday evening this season and the fifth placed side will be hoping to avoid a repeat of the 35-27 defeat they suffered back in October.

Barnes feature in our highlighted fixtures for the second week on the trot and that’s because they missed the chance to really remove themselves from any potential relegation battle in National Two South. Granted, Joe Gray’s side have a 15-point cushion between themselves and the bottom three but last Saturday’s defeat to Sutton & Epsom, who currently sit in the drop zone, has to go down as a missed opportunity.

However, the London-based side have a second chance to move another step closer to confirming their place in this division when they take on Old Redcliffians in Round 22. Alex Davies’ side so nearly boosted their survival bid last time out, but were denied a first victory since October.

A late try from Esher’s Lorcan Dow broke Old Reds hearts but the Bristol outfit did sensationally charge down the resulting conversion so they may look at last week’s outcome as two points gained rather than two points dropped. The men from Scotland Lane are 11 points from safety and having seen fellow strugglers Sutton & Epsom defeat Barnes, they may feel like their long wait for a victory could come to an end in the capital.

Elsewhere in National Two South, Henley Hawks will be keen to remain in the top two when they visit Old Albanian whilst Leicester Lions travel to Bury St Edmunds. Also on Saturday, Esher host bottom of the table Bournemouth, Worthing Raiders go to Westcliff and Dings Crusaders take on Sutton & Epsom.