Promotion bids blown off course as Round 21 delivers 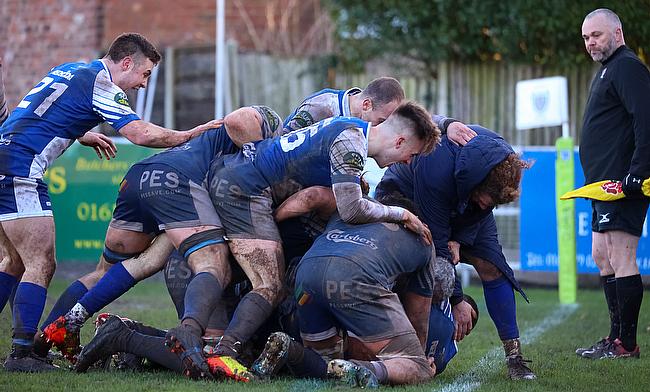 Some of the title contenders across National One, National Two North and National Two South had their promotion bids dented in Round 21 whilst others enhanced their ambitions.

Fergus Mulchrone scored first for Sale, but a try from Hugo Ellis levelled things up.

Harry Leonard's penalty after the break pushed Park into a 10-7 lead and when Jared Saunders dotted down from close-range on 64 minutes, the league leaders looked firmly in control.

However, what unravelled at Heywood Road sent the crowd into raptures. Three minutes from time, Stone Priestley-Nagle charged over before Mulchrone collected the ball inside his own half and shrugged off three Park defenders to scamper home.

“Playing top of the league was always going to be tough, but we have got this real key belief.”

?? @Nev_Star after a thrilling @SaleFC fightback against his former club Rosslyn Park #Nat1

?? Catch all the highlights from Round 21 tomorrow night: https://t.co/UnmXIYjmgO ?? pic.twitter.com/tjjYR8odVD

Jonathan Keep's side have now won five games on the spin whilst Rosslyn Park's gap at the top has been reduced to four points after a third defeat from their last four matches.

Their latest setback means second-placed Caldy are reeling them in after Gareth Davies' men continued their fine form at home to Cambridge. Three Ben Jones penalties (9-0) were enough for the Wirral outfit to stretch their remarkable record to nine successive victories and just one defeat from their last 18 matches.

Elsewhere, Rams RFC's momentum continued in Round 21 as they beat Bishop's Stortford 17-5 at Old Bath Road, whilst Darlington Mowden Park secured back-to-back wins for the first time since October after a scintillating 42-17 triumph over Chinnor and Tonbridge Juddians arrested a run of seven consecutive losses as Tom White guided them to a 16-12 victory against Blackheath.

Sedgley Park maintained their title push in emphatic style as they blitzed their way past fellow promotion contenders Fylde in a 38-0 win at Woodlands.

The prolific Matt Gallagher touched down to open the scoring before grabbing his second either side of tries from Danny Openshaw and Rhys Henderson.

With Sedge leading 24-0 at the break, they extended their advantage further through Bob Birtwell whilst Gallagher put the icing on the cake by completing his hat-trick.

Steve Collins also landed four conversions in a ruthless display by the visitors.

A great 38-0 win for @SedgleyTigers at @fylderugby yesterday in @Natleague_rugby #Nat2N A lot of hard work went into getting the game on due to water on the pitch which caused a delayed start. RVR caught up with Tigers' centre @o_glasse after the game. pic.twitter.com/moPMOEmZtv

Fylde, who had won all nine of their home games up until this point, have dropped to fifth in the table whilst Sedge are now third 10 points behind leaders Hull with a game in hand.

Rotherham Titans (2nd) also have the same margin between themselves and the table-toppers after drawing 10-10 with Luctonians in difficult conditions at Mortimer Park.

Stourbridge are up to fourth in the standings after scoring 12 tries in a thumping 74-17 victory over Harrogate. No.8 Ciaran Moore was the star of the show as he ran in five tries on a comfortable afternoon for Neil Mitchell's men.

Elsewhere, Lewis Minikin was on hand to steer Hull Ionians to a 15-3 win against Wharfedale, Chester weathered a Loughborough Students fightback to clinch a 30-24 success at Hare Lane and Blaydon secured their third win of the season (36-14) by doing the double over Bournville.

The standout result across National Two South in Round 21 came at Leicester Road where Hinckley dented Esher's title aspirations by condemning them to a 15-13 defeat.

Scores from Dale Bowyer and Matthew Fearn gave the Hornets a 15-3 interval lead, but Peter Winterbottom's visitors - who had lost in Round 20 against Henley Hawks - brought themselves back into the contest after Sam Morley converted his own try.

A penalty from the No.10 then changed the whole complexion of the game, but he agonisingly missed the target with 10 minutes to go which would have given the Eees the lead.

Both sides had their opportunities to land the decisive blow, but in the end, Hinckley held on as Esher fell to back-to-back defeats for the first time this term.

The loss means the Surrey outfit are now seven points behind Redruth (1st), who they play this weekend, after Nigel Hambly's side waltzed to a 40-0 triumph over Westcliff at The Recreation Ground.

Clifton manoeuvred themselves into second spot after a storming 52-7 win over Old Albanian in which Alex Giltrow bagged himself a hat-trick whilst fourth placed Worthing Raiders sealed their seventh success on the spin after they beat Barnstaple 21-6 away from home.

Elsewhere in the division, George Wood scored twice as Henley Hawks defeated Guernsey Raiders 23-0 and it was also a solid afternoon for Leicester Lions as their defence wasn't breached in a 35-0 win against Canterbury.

Meanwhile, Bury St Edmunds and Barnes played out a 6-6 draw in the capital and Oliver Bilton scored two of Dings Crusaders' nine tries in their pulsating 53-32 victory over Rochford Hundred.