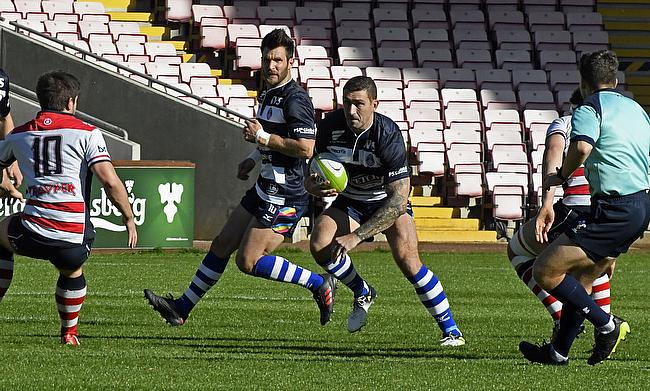 There is the small matter of England competing in a World Cup final to look forward to on Saturday, but make no mistake, another fascinating weekend of National League action should also whet the appetite.

In National One, second against third should be a firecracker as Rosslyn Park travel to Darlington Mowden Park as both sides aim to keep league leaders Richmond in their sights whilst in National Two North, there is also a top of the table humdinger.

Fylde take on Caldy at Woodlands as the only two undefeated teams in the National Leagues clash in Lancashire whilst in National Two South, the attention turns to the bottom of the table where Barnes and Bournemouth meet in a potentially vital fixture as both teams look to move away from danger.

Below is a more in-depth look at the key fixtures across all three divisions so expect some fireworks on the opening weekend of November.

After eight games, Richmond remain on top of the pile in National One after Steve Hill’s side bounced back last time out. The London-based club suffered their first defeat of the season against Cinderford, but they immediately responded by beating Rotherham Titans.

To begin November, they face Old Elthamians and the visitors to the Athletic Ground received a boost last Saturday as they produced a very solid display against Chinnor. Last year’s runners-up sit seventh in the table as things stand and they actually travel to Richmond having won four of their last five games.

Following their victory over Birmingham Moseley in Round Eight, spirits will be high at Rosslyn Park after Kieran Power’s side returned to winning ways at the first time of asking. The men from the Rock remain just three points behind Richmond, but they face another test of their title credentials this weekend.

?? TEAM NEWS ?? Here's your Mowden lineup for tomorrow's huge game against @rosslynpark at the Arena!

Tickets available on the day priced at £10 for adults and FREE for U16s. #MowdenFamily #ComeOnPark pic.twitter.com/Jlr3GVa8ht

Park make the long trip to the North-East and awaiting them will be a Darlington Mowden Park outfit who are full of confidence. Danny Brown’s side have put together a three-match winning sequence, which has launched them into third place, and a fourth consecutive triumph would see DMP leapfrog their visitors into second spot.

There is also a key clash at the wrong end of National One in Round Nine as Hull Ionians welcome Rotherham Titans to Brantingham Park. Two weeks ago, the Titans performed superbly against Chinnor to secure their first away win of the campaign and that triumph lifted them out of the drop zone. However, Martin Jenkinson’s men failed to build upon that result as they were beaten by table toppers Richmond last time out.

Rotherham now have the chance to hit back at the first attempt and facing the division’s bottom club may provide the perfect opportunity to do so. Hull Ionians come into this fixture already 16 points adrift of safety and they are still searching for their opening win of the season. The I’s were not in action last weekend as their match with Cinderford was postponed so the hosts may feel revitalised, which could help yield the victory they are craving.

Of course, England’s World Cup final clash with South Africa will be the biggest game of the day, but National Two North also has its own almighty battle. The top two teams in the division meet as new league leaders Fylde host Caldy and the home side were able to move four points clear at the summit last weekend.

Warren Spragg’s side thumped Chester to obtain pole position, but the Director of Rugby was keen to stress there are still areas for his side to improve upon. Another reason why Fylde claimed top spot was because Caldy’s eagerly anticipated fixture with Sedgley Park was postponed so Gareth Davies’ side will arrive in Lancashire hardly short of motivation as they look to wrestle back the leadership of the division. Caldy have won all seven of their fixtures and along with Fylde, they are the only two teams across the National Leagues yet to taste defeat. That record will, most likely, come to an end on Saturday.

Third-placed Sedgley Park will certainly be keeping an eye on proceedings at Woodlands across the course of Round Nine, but Scott Barrow’s men will be focused on continuing their excellent form when they face Loughborough Students. Sedge are five points off the top two, with that game in hand against Caldy to come, and they head into this fixture having won their last three matches.

The Students were experiencing a purple patch of their own during October, but their run of three consecutive victories came to halt last weekend. Rhys Edwards’ side were narrowly beaten by Otley so the Midlands club now occupy seventh spot, however, Loughborough showcased their quality last month and they will provide a strong challenge for Sedge on Saturday.

Can Fylde remain unbeaten and make a statement this weekend?

After losing three matches on the spin, Sheffield Tigers have hit back in the best manner possible. Jamie Broadley’s side certainly captured the attention of the division during October as three successive wins has moved the Tigers up to fourth place, just seven points off the top two.

Obviously, Caldy do have a game in hand but that won’t dampen the optimism amongst Broadley’s squad as Hull travel to the Tiger Dome this weekend. The visitors were able to move out of the bottom three in Round Eight following a 3-3 draw with Luctonians, but it probably wasn’t the result Gary Peace’s men were after. Hull are only outside the relegation places because they have a better ‘Points Difference’ than Huddersfield so if they can end their winless run of five matches in this all Yorkshire affair, it would be the ideal start to November.

National Two South leaders Taunton Titans travel to Esher looking to maintain their good form after obtaining top spot in the division. Tony Yapp’s side produced an excellent display to see off Clifton last Friday and coupled with Tonbridge Juddians’ failure to secure a bonus-point, the Titans were able to move to the summit.

Taunton now hold a one-point advantage at the top, but they will be aware of the tough test ahead of them this Saturday when they visit Esher. Peter Winterbottom’s charges have won their last four matches and it means the Surrey outfit are only five points off the promotion places heading into Round Nine. There was a lot of change at Molesey Road during the summer, but Esher now seem to be in full flight and they will be out to topple Taunton this weekend.

Tonbridge Juddians may well be hoping that is the case as they look to snatch pole position off Taunton in Round Nine. A hard-fought win over Redruth saw TJs return to winning ways after suffering their first defeat of the season against Henley Hawks, but they were unable to pick up a bonus-point at the Slade.

It opened the door for Taunton to claim top spot but you get the sense this race for the title has only just begun. Aiming to disrupt any promotion plans TJs may be harbouring will be Old Albanian, who Peter Dankert’s side face this weekend. OAs performed well in defeat against third-placed Henley last time out and that display should give Jamie Townsend’s men some confidence heading into this clash with TJs.

Teams of the month ??

October's grassroots player and teams of the month have been confirmed ??

Over the last few weeks, there has been some jostling for positions in and around the top two but arguably, the spotlight will be on the bottom three this weekend when Barnes entertain Bournemouth in the capital. Following their excellent win at Redruth in September, Barnes have not been able to find any sort of form and now they come into this weekend having lost their last five matches.

The London-based side were narrowly edged out by Old Redcliffians in Round Eight, but they are now two points off safety ahead of this potentially crucial fixture. Visitors Bournemouth have suffered back-back-defeats since breaking their duck against Westcliff at the start of last month so the Lions will be keen to halt their slide as quickly as possible because as things stand, they sit rooted to the foot of the division and six points from safety.