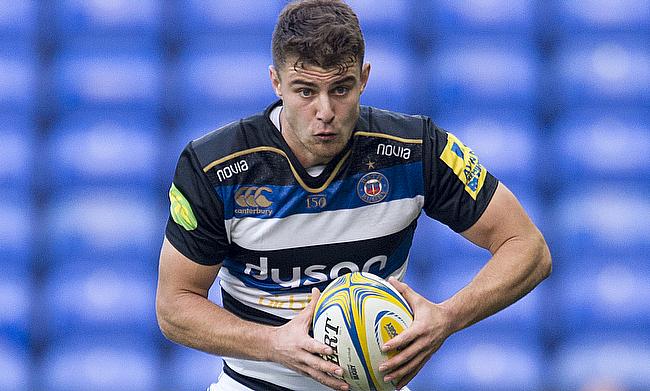 Bath's Ollie Devoto could face the Wallabies this summer
©PA

Mike Ford believes Ollie Devoto should be right in the frame for an England spot on their summer tour to Australia after he set Bath on their way to a bonus-point victory over Sale.

Devoto showed his power to score the opening try at the Rec in a 32-26 victory, and although he is heading to Exeter at the end of the season, Ford was happy to praise the young playmaker.

He hopes 22-year-old Devoto can make an impression with England to Australia, rather than go with the Saxons this summer.

Ford said: "I think Ollie Devoto should be pushing for the main England squad.

"It's just if Eddie (Jones), with other people coming back to form like Manu (Tuilagi) and Elliot Daly, would he play him or would he be better off going with the Saxons and actually playing games? That's a question I can't answer.

"It was a bit of a mixed bag. We started well, we started on fire. That was the plan, to start both halves well, but the first half was good.

"In the second half they came out as a very good driving side and they got back into the game through that weapon. One poor penalty by us and next thing we were under the pump a little bit.

"Then we took control of the game again, scored two tries and had Will Homer coming on and exciting everyone again."

Bath scored two tries in each half but Sale responded well to pick up two losing bonus points, leaving Steve Diamond pleased with the result of the double header against the West Country side.

Diamond said: "I think seven points out of the two games has been good for us. We didn't turn up in the first half. Sometimes that happens to us, we certainly showed a shift at half-time to come out and score 26 points, so we're getting there.

"We were direct about what had happened at half-time. Bath were all over us in the first half, they were more physical than us and we had to have a shift in that straight away.

"We scored immediately and then scored again straight after that. I'm glad we've got two points, but if you look at two of their tries, if they went to TMO, there's offside patterns all over the shop.

"We're happy with two points, but there's some things that we have got to look with the referees as it's just shambolic at the moment."