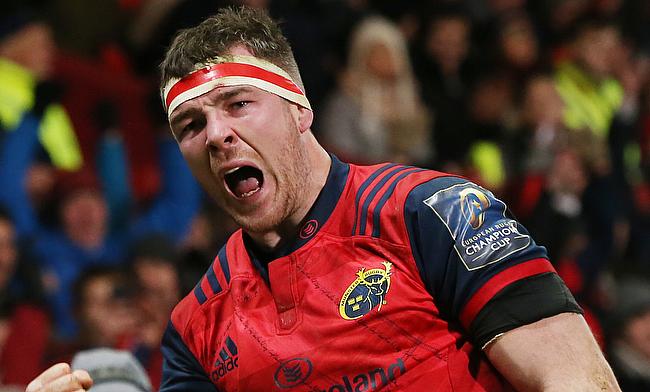 Munster maintained their top position in Pool 4 after they went on defeat Leicester Tigers 33-10 in their European Champions Cup face-off on Saturday.

Rhys Marshall and Simon Zebo were the try scorers for Munster in the first half while fly half Ian Keatley kicked two conversions and three penalties to take the Irish regional side to 23 points.

George Ford's solitary penalty was Leicester Tigers' only response as they trailed by a 20 point leading into the break. However, they had a fortunate moment when their skipper Tom Youngs was fortunate to avoid the sin-bin for a neck roll and then a shoulder charge just at the stroke of half time.

Turnovers continued to kill Leicester, Marshall ripping the ball back and the visitors were caught for numbers on the right where Zebo drew in Jonny May and linked with Darren Sweetnam who gave O'Mahony a simple finish by the corner flag.

Keatley sent the conversion wide and Leicester, on a rare visit to the Munster 22, turned a gilt-edged maul opportunity into a try at the second attempt. A Marshall rip denied them initially, but the second lineout - won by Graham Kitchener - resulted in Thacker crashing over for Ford to convert.

However, the Irish province slammed the door shut on any potential comeback when a well-executed maul saw Cloete ground the ball to complete a 23 point victory.