Much more to come from me - Mike Brown 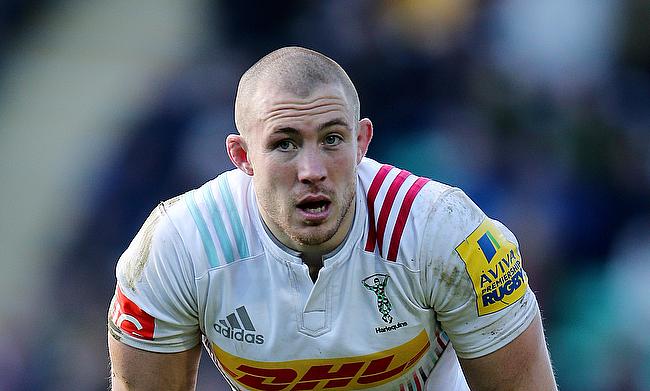 Mike Brown believes he is still improving as a player
©PA

England and Harlequins full-back Mike Brown believes he is yet to hit his peak and that there is much more to come from him as he already sets his sights on the 2019 World Cup in Japan.

First though, he will be trying to help Harlequins reach their second European Challenge Cup final in five years on Friday night when they take on Grenoble at the Stoop.

Quins boss Conor O'Shea leaves his post this summer to take over Italy and will be desperate to bow out with silverware.

While firmly established in the Harlequins number 15 shirt, Brown faces competition in the England side from Saracens' Alex Goode.

However, he believes he will continue to improve as England prepare for the next international cycle that will eventually take them to the 2019 World Cup.

"The competition's in my head. If I keep pushing myself, I believe I can be one of the best players in the world in my position," Brown told Press Association Sport.

"I believe that, and you have to have that confidence and belief if you want to play and thrive at the top level.

"I work hard every day on the training field, hard on what Eddie (Jones, England head coach) wants me to do and what the Quins coaches want me to do.

"I do feel over the next four years I've got so much more to give and learn, and to progress.

"You've got to keep believing you can get better and I do honestly believe that.

"I've only realistically played international rugby consistently for four years, and only under three coaches.

"Eddie's come in now, it's a new perspective. The guy's been around for so many years and has worked with so many great players it's exciting to see what we can continue to learn from him.

"It's exciting to think I've got so much more to come before I hit my peak."

In 2011, Harlequins won the Challenge Cup by beating Stade Francais 19-18 in Cardiff and to make it through to another final must beat Bernard Jackman's Grenoble side that Connacht 33-32 to win through.

And while Brown was a key part of England's first Grand Slam since 2003 earlier in the year, he knows he must finish the season strongly to guarantee a starting berth when they tour Australia in June, particularly as Jones will not be afraid to ring the changes.

"Eddie wants competition in every position, he wants it three or four players deep," Brown said.

"That can only be a plus for England. If we want to win the World Cup we'll need that.

"Teams like New Zealand, when they've lost players through seasons or tournaments, the next guy comes in and is equally as good. They don't miss out on anything.

"So we need to strive to have that as well, and that means each and every one of us need to keep working hard on our game.

"I think the way we want to play with England, the players are all very excited about that.

"Hopefully we can keep honing that and bring out some flowing rugby on the hard tracks in Australia.

"We're all desperate to be on that tour.

"I've always had that goal to play in Australia, for England or whoever, so I'd love to do that.

"But there's plenty of Quins business first and I will really need to play well if I want to get picked."