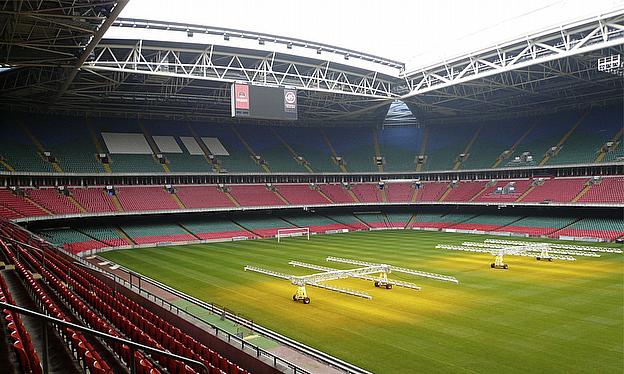 The boss of New Holland dealership JG Plant has spoken of his pride after his groundcare team had the honour of removing the last fully grass surface at Welsh Rugby Union’s Millennium Stadium.

Gareth Rees’s crew has been stripping the pitch in Cardiff at the end of the season every year since 1999 – but the latest operation was the last before a modern, semi-synthetic replacement comes in.

The Millennium Stadium job was carried out by Inscape, Gareth’s ground engineering and commercial landscaping organization which bought JG Plant in January. It is also based in Bridgend and has longstanding links with the dealership.

The New Holland-powered 30-man crew had to work round the clock from May 27th-30th on 12-hour shifts in order to shift 3,500 tonnes of material and get the job done between the stadium’s busy schedule of events.

The Heineken Cup final on May 24th – in which Toulon beat Saracens 23-6 – was a fitting and worthy final occasion before the fully grass surface was removed for the last time.

The process involved taking 40mm of soil off the top of the entire pitch. The whole operation was completed by 4am on Friday May 30th.

Once finished, however, the team also removed the playing surface of Llanelli’s Parc Y Scarlets rugby club for their end of season renovations before moving onto the Welsh Rugby Union training ground at Hensol and then the Football Association of Wales’s development centre at Newport.

JG Plant managing Director Gareth Rees said: “It’s been an honour for us and New Holland to help look after the hallowed turf of the Millennium Stadium for the last 15 years.

“We’ll miss the regular excitement of doing this job but I think it’s the right decision to update the playing surface. We’re just very proud to have played our part in the history of an incredible venue and a stunning pitch.”

He added: “This last task to remove the surface went very smoothly thanks to high quality our equipment. The operators like the New Holland machines a lot. In fact, they actually want us to change every machine for the brand.

“It’s the design of the machines, the comfort and the visibility that they like so much. There’s also a lot of torque too which you need when you’re shifting a lot of soil, but low ground pressure to minimize compaction.”