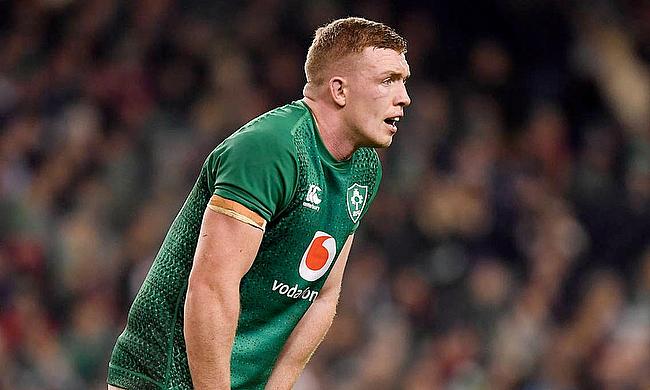 Pro14 to conclude in March, 16-team Rainbow Cup to kick-off in April

Leinster came up with a clinical performance as they secured a 27-point victory in their rescheduled Pro14 encounter at Parc y Scarlets on Saturday.

The game also saw Tadhg Furlong play the entire opening half on his first appearance since the Six Nations game against England in February last year.

Scarlets took just three minutes to get their first points on the board after Sam Costelow kicked a penalty goal. The response from Leinster came from Dan Leavy as he dived over the line at the back of a close-range scrum. Harry Byrne kicked the conversion but their efforts were negated two minutes later.

A well timed pass from Costelow put number eight Uzair Cassiem into a hole and he ran from halfway to the 22 before setting up scrum half Dane Blacker for Scarlets' opening try. Costelow also kicked the conversion to make the scoreline 10-7 before Leinster hooker James Tracy crossed over at the back of a line out maul which Byrne converted and also added a penalty.

The 34th minute saw Price leave the field for a head injury assessment following which Costelow kicked a penalty goal making the scoreline 13-17. However, the Welsh side suffered a setback in the 35th minute when Cassiem was sin-binned for collapsing a maul and to make things worse Leinster were awarded a penalty try.

Cian Kelleher touched down before the break as Leinster secured a bonus point in the opening half with Byrne's conversion ensuring the Irish regional side had a 31-13 lead ahead of the break.

Skipper Luke McGrath scored Leinster's fifth try 15 minutes into the second half before Scarlets responded with Will Homer's try that came after impressive run from Tyler Morgan. There was no respite whatsoever for Scarlets as Max O'Reilly and David Hawkshaw scored further tries to take Leinster's tally past the 50-point mark before Angus O'Brien provided a consolation try for Scarlets in the closing stage.