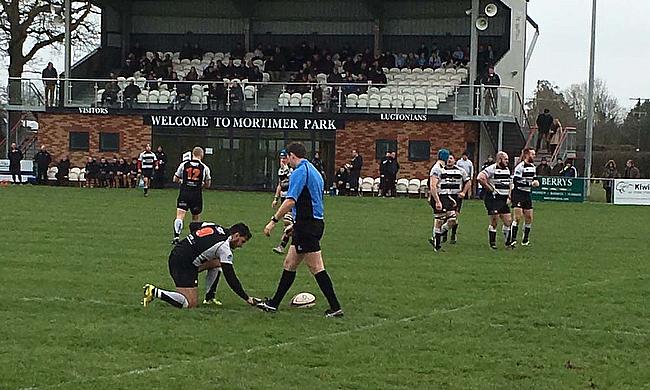 The National Leagues are a hot bed of young rugby talent and whilst the crowds are not as large as Premiership Rugby, it is clear that there are community clubs creating a platform for English Rugby.

As you head down to Herefordshire and meander along the Welsh border you see great farming land and massive countryside estates. What a fantastic part of the world but the trip from Luctonians to Tynedale is probably longer than a trip from Manchester to New York.

On arrival at Luctonians, the club house was full to capacity, enjoying a pre-match lunch. The speaker was the Daily Mail’s Brian Viner and what a talk he gave; bringing to Luctonians tales of Bernie Ecclestone, Brian Johnson and Richie Benaud.

If that was not informative and funny, then his knowledge of betting’s history through William Hill and Victor Chandler was insightful. To finish, he asked us to raise our glasses to Grassroots Sports; how appropriate that was for this National 2 North game.

The game started with Sedge playing towards the club house and with a strengthening breeze. The first scrum was called a penalty by the ref and awarded to Luctonians, the second scrum looking exactly the same was awarded to Sedge – both teams looked perplexed and immediately started to question the ref; that was to make it a tough day for the ref.

The first points went to Luctonians through the boot of their fly half Silver. The kick was perfect against the breeze but from that moment on it was to die away and not feature again. Another scrum penalty to Sedge saw Collins kick for touch. A well executed lineout and drive, a feature of Sedge’s play this season, took them within 7 metres of the line and from the next breakdown Waddy crossed for a try and it was to be converted by the reliable Collins.

The game was becoming niggly and dour; not the spectacle the passionate crowd were hoping for. A series of srums ensued and in centre field the scrum broke up with Warrington and Garner, exchanging pleasantries. The ref took his time, consulted with his assistants and play continued without action from the officials. Then seemingly from nowhere Sedge’s right winger, Jamie Harrison, broke through a crowded midfield and covered 55 metres to score a top class try – the highlight of the day for the neutral.

The remaining period of the first half was reminiscent of rugby from the 1970s and was to quote my colleague on Twitter, “more cheap shots than a Yates Wine Lodge”. This was old school and whilst it fired up the crowd, it was making this a tough day for the ref. However, the ref did yellow card Luctonian’s Louis Silver and Collins slotted the kick for 3 points.

With 10 minutes remaining, the Sedge front 5 were getting the upper hand at set piece time. This increasing pressure saw Luctonians cede more penalties and again Collins was willing and able to take advantage and the score was 3 – 23 as the players marched off for half time.

The start of the second half saw Ashcroft, Matthews and Greville assert their authority at the scrum on both feeds. This rattled the home team and another yellow card was awarded by the ref for Luctonians. With extra space the Riley brothers and Bedlow sought out space. They aimed to stretch Luctonians but no scores materialised until Sedge went for a lineout and drive; good control by Crous and Birtwell resulted in a try for hooker Johnny Matthews.

The introduction of Ben Lloyd and Jimmy Lloyd from the Sedge bench added to the Tiger’s power in the forwards but they found themselves having to defend as Luctonians laid siege to the try line. It was an attack based on determination and their fans hammered the side line boards in approval.

Sedge had gone down to 14 men with influential centre Matt Riley receiving his marching orders for an offence at the breakdown. Replacement Owen Davies went over the line and Silver converted. The crowd cried for more and a expectation of a late comeback .

The Tigers have some big name players in Crous, Lloyd, Matthews, Collins and Riley but there is a group of hardworking players delivering consistently each week; the likes of Harrison, Bedlow, Ashcroft, Manley, Waddy and  McShane. It was the latter who was to close out a 35-3 victory for Sedgley Park Tigers with a 45-metre run in

Grass roots rugby with a touch of class from Harrison and some old school brawling that wouldn’t have looked great on national TV.