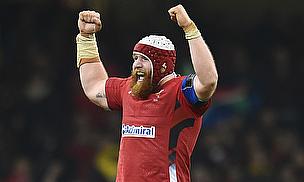 Scarlets lock Jake Ball has become the sixth player to sign a national dual contract with the Welsh Rugby Union and his regional team.

The national dual contracts are 60 per cent funded by the WRU and 40 per cent by the player's region from a total fund of £3.3 million.

"I am delighted to have signed a national dual contract and to be staying in Wales," Ball said.

"The NDC was a big factor in my decision, as I get to work hand in hand with the management at the Welsh Rugby Union as well as the Scarlets.

"Player welfare is extremely important, and being looked after by both parties is great for me.

"It's been a fantastic year for me. I am still taking everything step by step and want to perform as well as I can for the Scarlets to put my hand up for selection for the Six Nations."

Wales head coach Warren Gatland, who has been a key figure in the national dual contract process, added:

"The signing of Jake on a national dual contract is another important step for the future of the game in Wales.

"A player of Jake's calibre and age attracted serious interest from outside of Wales, but the introduction of NDCs means another Wales international has committed his future to Wales and his region."