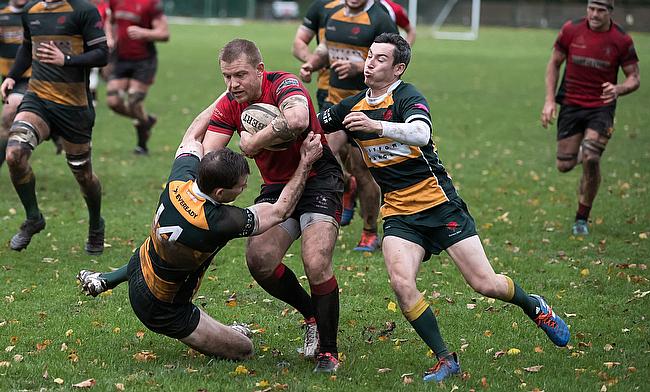 A winding down period before Christmas couldn’t be further from the truth across the National Leagues and with three weeks to go until the festive break, strap yourselves in for more twists and turns.

This most certainly applies to National One where the title race has burst into life. In the middle of November, there was a seven-point gap between the top two but as this month begins, 11 points separates the top 10 sides in the division.

So unsurprisingly this week, our highlighted games in National One involved the front three as Richmond, Rosslyn Park and Rams look to further strengthen their bids for pole position.

The spotlight is also on the summit of National Two North this week as Fylde and Sedgley Park do battle at Woodlands, with both sides in impressive form whilst in National Two South, attention turns to the bottom when Old Redcliffians travel to Bournemouth.

Below is a more in-depth look at this week’s action from across all three divisions:

Steve Hill and Richmond may well have snatched your hand off if you had offered them first position in the National One table heading into the final three games of 2019, but perhaps maybe not in these circumstances. The league leaders are one point clear at the summit, however, they enter this weekend’s clash with Cambridge off the back of three straight defeats.

After losing to rivals and near neighbours Rosslyn Park, the men from the Athletic Ground have also suffered setbacks against both Sale FC and Plymouth Albion so this might be the perfect time for Cambridge to take on the table toppers. Richie Williams’ side come into Round 14 having won just one of their last six games, but the Blood & Sand are 12 points clear of the drop zone due to their recent draws with Plymouth Albion and Darlington Mowden Park. Cambridge’s last win and only home victory this term did come against title chasing Rosslyn Park so can they humble another promotion candidate this weekend?

Since Rosslyn Park’s win over Richmond in the middle of November, the National One title race has exploded into life. Kieran Power’s side took full advantage of their near neighbours’ misfortune in Round 12 as they defeated Hull Ionians, but last week, Park suffered their own bump in the road. A last-gasp defeat to Rams RFC meant Park slipped to second in the standings and now the battle for pole position has intensified even further.

The men from the capital will be looking to get back on the horse as quickly as possible this week when they host Bishop’s Stortford. The visitors to the Rock are unbeaten in their last three matches and a positive sequence of results has moved Andy Long’s side 17 points clear of the relegation zone. Excellent wins over Rotherham Titans and Canterbury, either side of a credible draw with Old Elthamians, means Stortford will head into London with confidence behind them.

Can’t make it to the Rock for our #Nat1 game against @BSRUGBY ?

Rams RFC may have earned promotion to National One for the first time in the club’s history back in April, but Seb Reynolds’ side continue to improve and impress. The Berkshire outfit did suffer a dip in form during October, but four wins from their last five matches has re-energised Rams’ campaign and has left them in a strong position in the title race.

Following their dramatic triumph over Park, where they were awarded two penalty tries in the final three minutes, Rams are only two points off the top as they prepare to make the trip to Sale FC. If Rams had an enjoyable November, Sale would probably share that same view. Jonathan Keep’s men have won three of their last four fixtures which has seen the Manchester-based club move up to ninth in the table and they are actually only 11 points behind leaders Richmond. FC’s home record has been extremely strong too and they will be eyeing a fifth straight win at the CorpAcq Stadium on Saturday.

Like Rams, Blackheath are only two points off the top following six wins from their last seven fixtures and their possible title push continues in Round 14 with an intriguing visit to Darlington Mowden Park, who thumped Birmingham Moseley 66-8 last time out.

Elsewhere in National One this weekend, Cinderford travel to bottom of the table Canterbury and Chinnor take on Moseley whilst Old Elthamians host Rotherham Titans and Plymouth Albion welcome Hull Ionians to Brickfields.

Caldy’s 12 games this season have been almost faultless. Twelve successive wins and only four points dropped represents the perfect response to relegation from National One and Gareth Davies’ men are deservedly sat at the summit of National Two North heading into the opening weekend of December.

The Wirral outfit brushed Huddersfield aside last time out, and now they make the journey to the North-East to face Tynedale in Round 14. The hosts on Saturday suffered a tough away loss to Chester last weekend and in fact, it was only Tyne’s second defeat in seven games. The men from Corbridge are now sixth in the league, 15 points off the top two, but if they were to become the first team to defeat Caldy this term, it could edge them back into the frame for promotion.

Sedgley Park are just five points behind second-placed Fylde as the sides prepare to meet at Woodlands this weekend in what can only be billed as an early ‘Christmas Cracker’. The hosts will want to make a significant statement in the race for a top two spot this weekend and a decent response against Otley last time out will have revitalised Fylde after losing their previous fixture to Hull.

Leon Simpson has highlighted the importance of Sedgley Park's massive fixture against Fylde this weekend in our latest 'In Focus' interview...#Nat2nhttps://t.co/3t6pgfC3rM

As for Sedge, they head to Lancashire in fine fettle. Scott Barrow’s men have won four on the bounce and with a game in hand to come against league leaders Caldy, a repeat of last year’s away victory at Fylde would be a massive result for this young Sedge outfit if they do harbour hopes of having another shot at promotion this term.

Down at the bottom, the big games are continuing to come thick and fast for Luctonians but Ryan Watkins’ side have risen to the challenge over the last two weeks. An excellent victory over rivals Scunthorpe was followed by a brilliant display against Preston Grasshoppers which has lifted the Lucs two points clear of the relegation zone.

Whilst the Herefordshire club seem to be heading in the right direction, the same cannot be said of their opponents this weekend. Wharfedale welcome Luctonians to the Avenue eager to end a barren spell in which the Greens have won just one of their last six games. Rob Baldwin and Jon Feeley’s side are now just three points clear of the drop, but a victory to kick off December would be most welcome.

Also across National Two North this weekend, Loughborough Students face a Huddersfield side who fell into the bottom three last Saturday, Sheffield Tigers travel to an in-form Hinckley and Stourbridge host Chester whilst Otley go to Scunthorpe and Hull take on Preston Grasshoppers.

Tonbridge Juddians are back at the summit of National Two South and they will be keen to continue showing why they deserve to be there as this enthralling race for promotion enters Round 14. TJs regained control of top spot last time out as a victory over Barnes, combined with Taunton Titans’ loss to Leicester Lions, meant Peter Dankert’s side moved one point clear.

Next up for the men from the Slade is a home fixture against Dings Crusaders and the visitors from Bristol will be keen to return to winning ways as quickly as possible. The Crusaders have lost their last three games, but it must be highlighted those matches were against promotion chasing Taunton and Henley Hawks as well as a Worthing Raiders side which has hit some recent good form. Dings’ last win came on the road against Bournemouth just under a month ago so can they cause an upset this weekend?

Everything about the current race for promotion suggests it could go the distance and if it were to do so, Henley Hawks would be one of the leading candidates. Nigel Dudding’s side have been in the mix since the season began in September and the Hawks moved back into the top two last weekend following a victory over Dings Crusaders.

Henley are one point behind Tonbridge Juddians and one point clear of third-placed Taunton Titans so the margin for error is small when they host Bury St Edmunds on Saturday. The Wolfpack arrive at Dry Leas with their unbeaten home record intact after a thrilling victory over Worthing Raiders and now Bury will be keen to translate that form on to the road. The Suffolk club have won on their travels on just one occasion thus far so a first away win for over two months would be a brilliant way for Bury to begin the festive period.

With Taunton Titans taking on relegation rivals Sutton & Epsom this weekend, Old Redcliffians’ clash with Bournemouth may present an opportunity for the Bristol club to pull away from danger. Of course, this is assuming S&E don’t spring a surprise at Rugby Lane but if results were to go based on league position, it could boost Old Reds’ survival hopes if they were to get the job done on the south coast.

The visitors arrive into Round 14 on the back of four straight defeats whilst Bournemouth are currently seven points from safety. Yet again, the Lions were left disappointed and frustrated as with less than a quarter of an hour remaining in last week’s fixture against Sutton & Epsom, the game was abandoned due to a power cut. Bournemouth were trailing 20-15 so the result remained that way and Richard Sharp’s men have now lost their last seven games. It means victory at home on Saturday could be vital if Bournemouth are to begin mounting a fightback.