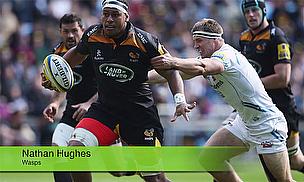 The pairing of Exeter Chiefs No.8 Thomas Waldrom and Wasps No.8 Nathan Hughes were recently named on the shortlist for the Green Flag Forward of the Season award - the winner of which will be announced at the annual Aviva Premiership Rugby Awards on Wednesday evening.

England World Cup winner Neil Back joined a panel of judges at Premiership Rugby’s offices recently to pull together the shortlist with Dave Ewers, Billy Vuniploa and Samu Manoa voted in alongside Hughes and Waldrom.

According to Opta stats for Premiership Rugby, after 22 rounds 23-year-old Hughes ranks highly on most of the key areas having beaten 71 defenders, a mark only bettered by Newcastle Falcons’ Sinoti Sinoti, made 37 offloads, a league-best 24 turnovers and 238 carries.

The future of rugby belongs to crowd-pleasers such as Nathan Hughes, according to World Cup winner Neil Back, who has compared the Wasps No.8’s antics on the pitch to a Harlem Globetrotter.

Back joined a panel of judges at Premiership Rugby’s offices to narrow down an all-star shortlist for the Green Flag Forward of the Season award, and Hughes was a unanimous selection.

Indeed for all the electrifying talent among a Wasps back-line that includes Christian Wade, Joe Simpson and Elliot Daly, Hughes is arguably the star turn of the lot.

According to Opta stats for Premiership Rugby, through 20 rounds the 23-year-old has beaten 68 defenders – solely behind Newcastle Falcon Sinoti Sinoti in that department – made 36 offloads, a league-best 21 turnovers and 19 breaks.

And Back, who was an all-action forward himself in his glory days with England and Leicester Tigers, says Hughes has set the benchmark.

“Nathan Hughes for me is a young man who, having signed from Auckland last year, has I think only missed one game for Wasps this year,” he said.

“He is an absolute wrecking ball as a carrier and he’s one of the best if not the best at the contact area over the ball.

“He’s incredibly strong and has a great body position which is probably down to his upbringing in New Zealand.

“I watched him against Exeter and he was like a Harlem Globetrotter with his offloading and one-handed carries.

“He’s a great example for everyone of how to play the game. He gets the crowd on its feet, he’s exciting and he’s a threat. From watching him play, I felt he’s one of the best without even looking at the stats.”

Vunipola is the current Red Rose starter at No.8, Waldrom and Ewers could well be in the mix come the World Cup in September while Hughes becomes England-qualified in June 2016.

And with Ben Morgan and the evergreen Harlequin Nick Easter all jostling for contention at No.8 too, Back insists Hughes would only add to a back-row loaded with quality.

“As a coach, particularly Stuart (Lancaster) in the England job, you want competition. Competition means players have to maximise their individual potential to get in and stay in the team,” he added.

“I remember myself being challenged by lots of people.

“Many people talk about Dallaglio, Hill, Back, but we had Joe Worsley, Martin Corry and Lewis Moody all who were potentially as good.

“You need that and Nathan Hughes is brilliant news for England should he wish to pledge his allegiance in the future.

“Nathan’s 23, Billy is 22, Ben Morgan is 26. My head and heart tell me different things about England – my heart’s saying we’ll win the World Cup, my head’s saying we’re not quite there.

“But if you think of their ages at the minute, in two, three or four years’ time they’ll not only be very good but very experienced. So watch out New Zealand and the Lions tour in 2017 and the next World Cup.”