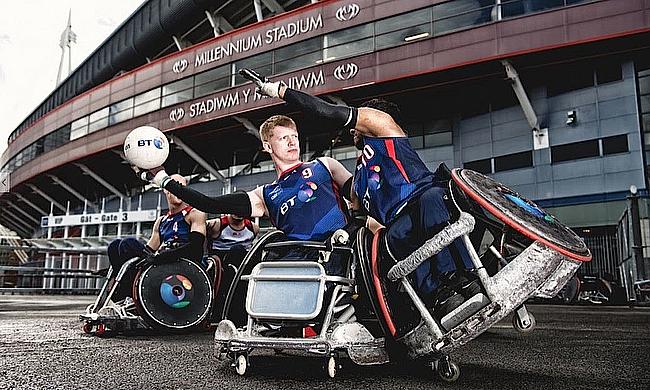 Great Britain wheelchair rugby squad qualify for Rio with a resounding win at the European Championships.

Great Britain Wheelchair Rugby has won Gold at the IWRF European Championships in Pajulahti, Finland. After coming top of their Pool they defeated fellow Pool winner Germany to win a place in the finals against current title holders Sweden, beating them 49-48.

Scoring 13 of the goals was 25-year-old Ayaz Bhuta.  Born with Roberts syndrome, which limits the growth of limbs, Bhuta is 3ft 7in and weighs in around 42 kilos. A force to be reckoned with, he comments, “It feels great to be the champions of Europe, we have worked hard for this but it is only a step on our journey to win a medal at Rio".

Performance Director, GBWR, Lorraine Brown comments, “Reaching the European finals has been a key goal in the performance plan of the squad this year.  Our success means we can now focus our attention on Rio and further honing the skills of the squad.  Next on our list is to medal at our own international tournament, the BT World Wheelchair Rugby Challenge 2015 (BT WWRC 2015) which will take place from 12 to 16 October 2015 at the Copper Box, Queen Elizabeth Olympic Park, London, and see London 2012 Paralympic Gold medallists Australia return to the UK alongside Silver medallists Canada and Bronze medallists USA.”

David Pond, Chief Executive Great Britain Wheelchair Rugby believes the forthcoming matches will test the squad considerably, “Our aim now is to provide the GB team with an opportunity to play the best in the world so that they are ready for Rio in a year’s time.  At the same time, BT WWRC 2015 will be a fantastic chance for UK fans to relive the excitement of London 2012 and see some top class wheelchair rugby as part of the Rugby World Cup’s broader Festival of Rugby.  It’s an exciting to be part of the wider ru