Chance for Canterbury to reclaim second spot against in-form Taunton 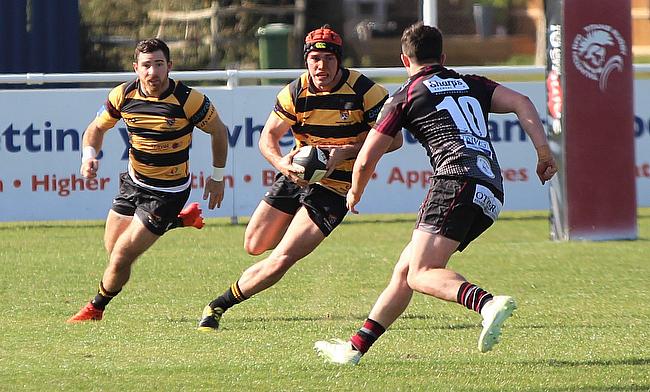 Canterbury can move back into the play-off place in National Two South when they take on Taunton Titans on Saturday.

Andy Pratt’s promotion chasing side are just two points behind second place after losing to Dings Crusaders last week, but Taunton come into this clash in a rich vein of form having won their last six matches.

The Somerset club have been outstanding over the last month so this should be a cracker at the Marine Travel Ground in Round 19.

Fellow promotion challengers Henley Hawks will be keeping tabs on events in Kent, but they will also be focused on their own job against Old Redcliffians while table-topping Rams RFC aim to continue their sensational form.

Seb Reynolds’ side are 15 points clear at the summit after a 14-match winning run and they can continue their remarkable sequence of results against Bury St Edmunds on Saturday.

Is there any stopping Rams RFC? Seb Reynolds’ men made it 14 wins on the spin last weekend against the only side in the league to beat them this term. Old Albanian had no answer for the league leaders this time around as the Rams continued their march towards the National Two South title and promotion to the third tier.

The Berkshire club are currently 15 points clear at the top, but they will certainly be avoiding complacency especially against a rejuvenated Bury St Edmunds side on Saturday. Bury have turned a corner under the guidance of recently appointed head coach Nick Wakley and the Wolfpack are currently on a four-match unbeaten run. This means they are one of the form sides in the division and with some confidence behind them, the sixth-placed side may feel they can topple the Rams this weekend.

The race for second spot in National Two South has been grabbing the headlines in recent weeks and ahead of Round 19, it is no different. Taunton Titans and Canterbury meet at the Marine Travel Ground on Saturday with both sides targeting the play-off spot in this division. As things stand, it is Taunton who occupy the position after a superb run of six straight wins.

Tony Yapp’s side have been impeccable since the beginning of December and they also moved into the top two because Canterbury lost last weekend. The City Men were defeated by a last-gasp penalty against Dings Crusaders and once again, Andy Pratt’s side are doing the chasing. The Kent outfit are only two points off Taunton so a victory on Saturday would see them leapfrog the Titans in this intriguing battle for second place.

Henley Hawks will certainly have one eye on proceedings at Canterbury as the fourth-placed side look to spark their season back into life after a difficult couple of weeks. Back to back losses against Rams RFC and Tonbridge Juddians means Nigel Dudding’s men are now four points off Taunton Titans, but a victory over Old Redcliffians at Dry Leas would reignite their promotion challenge.

That won’t be as simple as it sounds as Old Reds come into this Round 19 encounter in very good form. Four wins from their last five games has created a gap of 15 points between themselves and the relegation places, with last weekend’s triumph over London Irish Wild Geese proving to be a significant result as things stand. Saul Nelson’s side may well be sitting just above the drop zone, but they are capable of causing Henley problems on Saturday.

Seventh placed Old Albanian entertain Tonbridge Juddians (5th) this weekend, but despite only a couple of positions separating the two sides in the division, the gap between the clubs is far from small. TJs will arrive at Woollams 15 points ahead of their hosts, but more importantly for Peter Dankert’s side, is the fact that they may well be back in the race for second place.

The men from the Slade defeated Henley Hawks in Round 18 and now TJs are only eight points behind Taunton Titans. However, despite OAs’ poor recent form, this weekend’s fixture won’t be straightforward for the visitors. The home side have lost their last four matches and any hopes of instantly bouncing back into National One are all but over. Gavin Hogg’s side will now be concentrating on a strong second half to the season and a win over TJs would be most welcome.

Speaking to the Worthing Herald earlier this week, Worthing Raiders head coach Jody Levett seemed far from pleased to see his side’s three game winning run come to end in Round 18. The Raiders lost to Clifton at Roundstone Lane, but despite their defeat, they still remain in the top half of National Two South.

Some lunch time reading for you ahead of Game 19 in the season.

Worthing Raiders are away to Birmingham and Solihull this Saturday.

Thank you Peter Gavin as always.

Worthing will be demanding a reaction this weekend when they take on Birmingham & Solihull while the Midlands club will also be hoping for a positive result. The Bees were beaten by Taunton Titans last Saturday and even though they produced an encouraging display, Pete Glackin’s side are now 16 points adrift of safety with 12 games left to play. Birmingham & Solihull did win on their last outing at Portway against Dings Crusaders at the start of the month and they will desperate for a similar result in Round 19.

It was the perfect start for new Director of Rugby Nigel Hambly as Redruth halted a five-game losing streak by beating Guernsey last week. The Reds produced a performance of character in Round 18 and Hambly is keen for his side to build on that victory when they travel to Clifton on Saturday.

Redruth are 10th in the table and level on points with them are their hosts in Round 19. Clifton come into this contest after a superb win away at Worthing Raiders as Matt Salter’s side continued their positive start to the New Year. The Bristol outfit have picked up 12 points from their last three games so the men from Station Road will be eager to maintain their momentum.

In an extraordinary finish against Bury St Edmunds last Saturday, Barnes were able to avoid defeat in dramatic fashion for the second week running. After snatching a win at Old Albanian to begin 2019, the London-based side recused a draw in Round 18 so they will be hoping to make it three games unbeaten when they take the trip to Guernsey this weekend.

As things stand, Guernsey sit at the foot of the National Two South table and they are now 16 points from safety after falling to their 12th defeat in a row. Jordan Reynolds’ side have suffered multiple injuries in their debut season at this level, but there is one positive they can carry into this Saturday. One of the Raiders’ two victories this term did come against Barnes back in September so they will be keen for the same outcome at Footes Lane.

It was arguably the result of Round 18. One swing of Steve Plummer’s right boot saw Dings Crusaders clinch a last-gasp win over promotion chasing Canterbury last weekend and not only that, it also ended a run of four straight defeats for Luke Arscott’s side. It was an excellent performance by the Crusaders who now sit 12th in the table and after ending their mini drought, they will be keen to taste that winning feeling once again on Saturday.

So, this is the moment of the match against @cantrugby

As the late, great Bill McLaren would say “the crowd will tell you - they’ll be dancing in the streets of Frenchay - chuffed!”#UTD https://t.co/Tj18IgDHBp

On paper, people may predict a Dings win because London Irish Wild Geese currently sit in the bottom three. Their defeat against Old Redcliffians last time out certainly dented their survival chances as the men from Hazelwood now sit 15 points adrift of safety. After shocking Tonbridge Juddians to begin the year, Wild Geese couldn’t back it up, but they have the chance to give themselves a lift if they can defeat Dings on their own patch this weekend.

TJs back on top after Henley beaten by Redruth