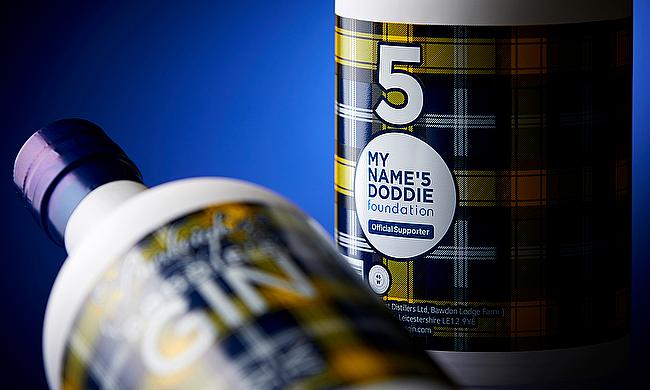 All profits will go directly to the Foundation, helping to fund vital research into the causes and potential cures of Motor Neurone Disease.

The exclusive Doddie’5 Gin recipe was developed by Burleighs Gin Head Distiller, Ed Gibson and Doddie Weir at the 45 West Distillery. They combined the unique Burleighs Signature recipe with specially selected botanicals that pay homage to Doddie’s roots in the Scottish Borders. Ed commented: “By including milk thistle and heather flower to our Signature blend, we have created an incredibly vibrant artisan gin that we are proud and excited to put our name to.”

They are calling on rugby and gin fans to help tackle MND and be part of the cure by pre-ordering the special edition bottle online from BurleighsGin.com. Burleighs’ drive with this partnership is to raise crucial funds and awareness for the My Name’5 Doddie Foundation. With the profit from each bottle sale going directly to the Foundation, they are committed to achieving our goal of raising £1,000,000 (one million pounds).

The My Name’5 Doddie Foundation was set up in November 2017 by Doddie and his fellow Trustees, five months after he revealed the he was suffering from Motor Neurone Disease himself. Doddie earned 61 caps for Scotland during a successful playing career and represented The British & Irish Lions on their victorious 1997 tour to South Africa. From the outset of his diagnosis, Doddie has been driven to help fellow sufferers and seek ways to further research into this, as yet, incurable disease. In its first year, the Foundation committed to £1 million to help find a cure and to support those affected by MND, and are confident of investing a similar figure in 2019.

Doddie added: “We are delighted to be involved with Burleigh’s and very much appreciate their fantastic support through Doddie’5 gin. We had a great time creating the gin with Ed and the team at 45 West Distillers and I hope everyone enjoys it as much as I do! I was keen to introduce a hint of the Borders into the flavor and we are thrilled with the result.”

It is hoped that the funds raised from the sales of Doddie’5 Gin will assist the Foundation in achieving its aims:

Burleighs Gin are proud to join this new venture with one of rugby’s most recognisable personalities. 45 West Managing Director, Matt Payne, added: "Doddie is a truly inspirational character and working in partnership has been a humbling experience. They have created a fantastic gin together and feel honoured to be given the opportunity to support the Foundation’s ongoing fight to raise the necessary funding to find a cure for MND.”

Help tackle MND and be part of the cure by donating: