Barritt determined to play it cool 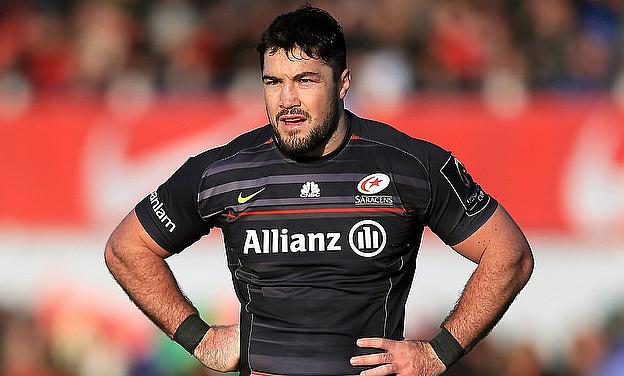 Barritt will captain his side in the absence of the injured Alastair Hargreaves as Saracens bid to make their second consecutive European final.

It is the fourth time Mark McCall's men have met Clermont in less than 12 months after they hammered the French outfit 46-6 at the same stage last year before the teams shared a win each in this season's pool stages.

"In terms of psychology both teams know on their day they can be very successful against the other," Barritt said.

"It will come down to which team can rise to the occasion and keep the emotion down to a minimum.

"It's about being able to flick the switch in and out of intensity.

"There are times in a rugby game when you have to go 100 miles an hour but during the dead moments in the game - for a back during a scrum or when a penalty is given - being able to calm those emotions and have a clear train of thought is something I've looked at a lot.

"At Saracens we put a huge emphasis on being able to go in and out of that emotion and tailor that aggression with clear thought and clear communication."

Saracens will be desperate to avoid a repeat of last year's end-of-season disappointment, after defeat to Toulon in Europe was followed by a loss to Northampton in the Aviva Premiership final.

"What makes us a better team this season? The experiences we've been through," Barritt said.

"All the things that don't go well for you in the past are often a galvanising aspect in the evolution of a team.

"We have a squad who have been there and done it and experienced the highs and lows of winning a Premiership, losing the final of a Premiership.

"We've consistently gone to quarter-finals and semi-finals of Heineken Cups and those memories have made us a stronger team."

Barritt returned from an ankle injury last weekend to play 70 minutes in a 22-6 win over Leicester and lines up alongside Marcelo Bosch in the Sarries midfield.

McCall said Barritt had shown no ill-effects from his comeback and believes the England centre's inclusion is a big boost for his side.

"He grew into the game last weekend, defended well and has had full training this week so he's good to go," McCall said.

"Our experience says that in games as big as this and as difficult as this you need your warriors, and there's no-one who epitomises that more than Brad.

"His influence on the team is profound.

"His presence generates confidence, he's a good leader, he's very vocal on the pitch, an organiser, and he gives confidence to the whole team."

Barritt and Bosch will be tasked with containing Clermont's deadly centre pairing of Wesley Fofana and Jonathan Davies, who were instrumental in the team's 37-5 thrashing of Northampton in the quarter-finals.

Davies paid tribute to Barritt's influence on his side and believes Clermont must be positive in Saint-Etienne.

"Brad is a very strong ball carrier, he's a rock in the midfield and the defence as well," Davies said.

"He makes his tackles and he reads the game very well.

"He has some lovely touches and for him to come back would have been a big boost for them in midfield.

"We have to make sure we're accurate and cause them problems - we can't sit back, we have to go forward."