Barnstaple and Wimbledon fail to beat the drop 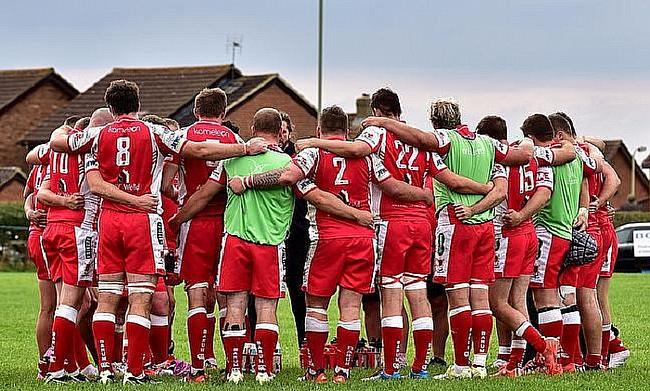 Barnstaple have been relegated despite their victory over Wimbledon
©Aaron Bayliss

Barnstaple and Wimbledon have both been relegated from National Two South while Old Redcliffians and London Irish Wild Geese survived the drop on the final day of the season.

Relegation for Barum and the Dons was confirmed after Old Redcliffians secured victory in their game against Redruth with Wild Geese clinching one point in a defeat to Worthing Raiders.

Wimbledon have lasted just one season at this level while Barnstaple's time in National Two South has come to an end after two terms.

Elsewhere on the final weekend of the campaign, Cinderford's party continued at home to Canterbury and Chinnor prepared for their play-off in style while Redingensians thrashed Henley Hawks, Taunton Titans edged past Broadstreet and Tonbridge Juddians fought back to beat Bury St Edmunds.

Cinderford celebrated promotion to National One with a comfortable triumph over Canterbury at Dockham Road to take their tally to 24 victories on the spin.

Harry Hone ran over twice for the Gloucestershire side and further tries from Reuben Norville, Nathan Taylor, Jimmy Williams and Roger Birkin saw Cinderford pull clear after a tight first half.

Chinnor prepared for their National Two play-off clash against Sedgley Park with a superb win over Clifton at Kingsey Road.

Dan Wells had gone over for Clifton just before break, but Chinnor added four more scores to their tally.

Chinnor will now take on Sedgley Park for a place in National One on Saturday May 5th.

Redingensians recorded their biggest win of the campaign on the final day of the season as they ran in seven tries to beat Henley Hawks.

The Rams had already secured third place in the table, but rounded off a superb term with a stunning victory against a Henley side that will be disappointed to have won just one of their final 10 games. The Hawks ended the season in ninth place.

Taunton Titans bounced back from last weekend's heavy defeat against Tonbridge Juddians with a victory over a spirited Broadstreet in the Midlands.

The visitors scored the opening try on 22 minutes through Ollie Rice, but James Moreton crossed for Broadstreet before Paul Davis' try saw the away side take a seven-point half-time lead.

Broadstreet scored a penalty try 15 minutes after the break, but Taunton responded as Lewis Webb darted over.

However, the already relegated hosts then went in front for the first time in this contest as Ed Boxhall crossed, but the Titans kept their cool to snatch the win as Rice grabbed his second late on.

Old Redcliffians ran in five tries as they beat Redruth to secure their survival in National Two South.

The hosts knew a victory would keep them in this division, regardless of results elsewhere and tries from Ethan Doyle (2), Kieran Ward, Scott Coster and Sam Smith secured safety for Saul Nelson's side.

Huge performance from the @OldRedsRFC boys today to beat Redruth and secure our Nat 2 South status! So proud of their achievement... UTR

Redruth did manage to trouble Old Reds' defence with Alex Ducker and Loma Kipivila both crossing, but after eight wins from 14 matches since Christmas, the men from Scotland Lane have beaten the drop.

Tonbride Juddians signed off the season in style as they came from behind with 14-men to beat Bury St Edmunds at the Slade.

The Suffolk side led 14-10 in the first half, but they saw a likely victory snatched away from them in the final 10 minutes of this contest.

Sean Stapleton, Craig Wilson, Dwayne Corcoran and Mark Kohler crossed for the home side who had led 21-10 at one stage in this contest.

London Irish Wild Geese will be playing in National Two South next season as Jack Cooke's late try secured them their survival despite losing to Worthing Raiders.

Lee Starling's side required just one point from this fixture at Hazlewood to avoid the drop.

The Geese had led this contest at the break thanks to a brace from Bradley Clements while Harrison Sims replied for Worthing.

The visitors were much better after the break as a score from Joe Spurgeon and a double from David McIlwaine gave the Raiders the lead which they never relinquished, but the vital moment in the game came two minutes from the end as Cooke dotted down to confirm London Irish Wild Geese's safety.

Both Barnstaple and Wimbledon have been relegated from National Two South after Old Redcliffians' win over Redruth at Scotland Lane.

Barum and the Dons needed Redruth to do them a favour in Bristol if either side had any chance of staying up, but Old Reds' victory sealed their fate.

Well Nat 2 we've had a blast these past two seasons and made some great new friends. Further reflection tomorrow BUT we will be back! ??????

After the break, Niall McSweeney doubled the Dons' advantage, but tries from Kyle Spear and Danny Southworth levelled the game.

Barnstaple then struck a penalty to seal the victory, but it unfortunately, it was in vain.